Changes in applications and assessments can be driven by changes in legislation, policy and practice. The increase in homelessness between 2002/03 and 2006/07 was in part a consequence of Scottish homelessness legislation[3] which extended councils' duties to non-priority homeless households. The priority need test was abolished on 31st December 2012[4]. Meanwhile, the number of homelessness applications has decreased in more recent years from 2008/09 to 2016/17, which is likely to have been due to the impact of the introduction of Housing Options services in Scottish local authorities, with a focus on prevention[5].

Chart 1: Scotland: Number of applications and assessments under the homelessness legislation 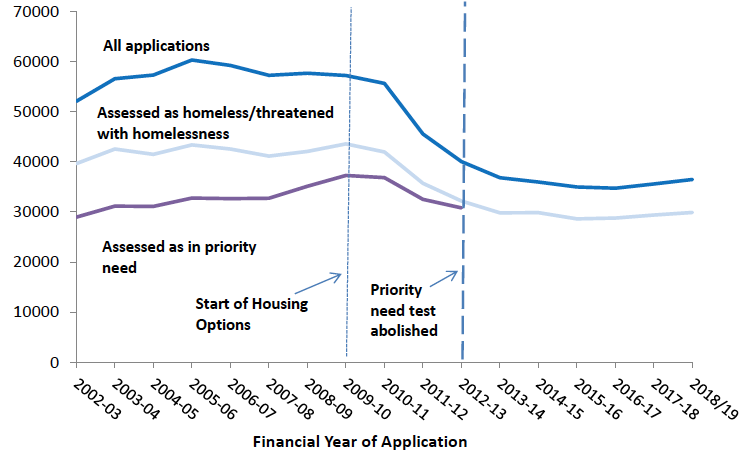 Between 1 April 2018 and 31 March 2019, Local Authorities received a total of 36,465 homelessness applications. This is an increase of 892 (3%) applications compared to the previous year. 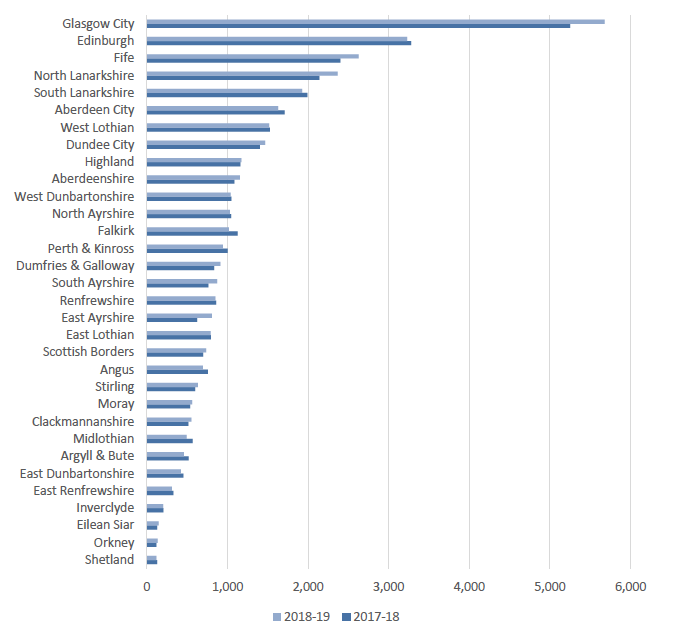 The underlying drivers of homelessness have remained largely the same over the past few years. However, the introduction of Housing Options work is likely to have resulted in an overall decrease in the number of homelessness applications since 2009.

Impact on Applications and Assessments

There is no evidence to indicate that any one group is being impacted more by housing options work than any other. However, what is evident is that there is marked variation among Local Authorities in the frequency and delivery of this work. Scottish Government policy has been for Local Authorities to define for themselves how Housing Options is implemented. Further statistics on Housing Options are collected through the PREVENT1 return and are available at http://www.gov.scot/homelessstats.

The proportion of homelessness applications that have been through the Housing Options route first in 2018/19 varies considerably by local authority. This reflects the locally defined nature of Housing Options.

As Local Authorities make their own decision as to how and when to record Housing Options approaches, there is wide variation of the proportion making an approach prior to (or on the same day as) a homeless application across local authorities. This varied from none in East Dunbartonshire and Eilean Siar, to 99% in Inverclyde, Falkirk, South Ayrshire and Glasgow City (Chart 2).

Chart 2: Proportion of homelessness (HL1) applications where a Housing Options Approach (PREVENT1) was made first , 2018 19 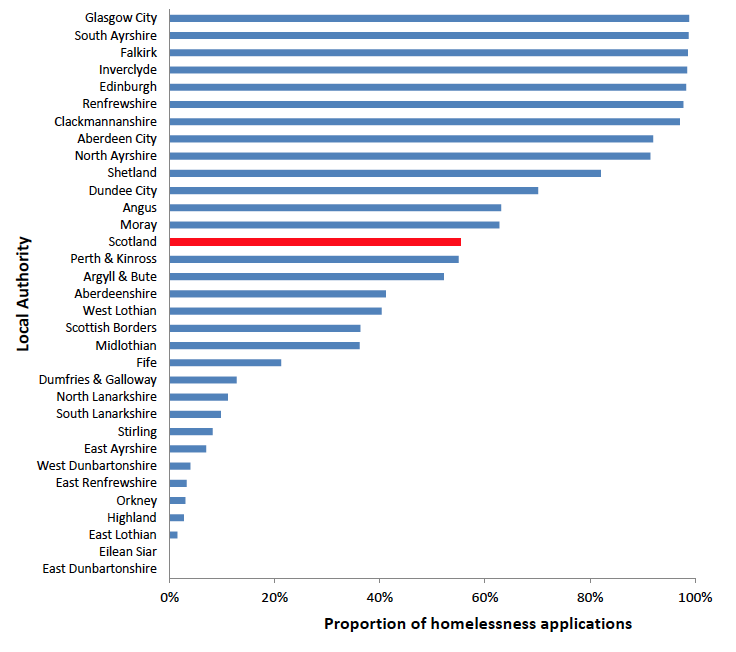 Rough sleeping (Tables 2a and 2b)

The proportion of applications where a household member reported sleeping rough at least once during the last 3 months prior to application has reduced since 2002/03, from 13% of all applications in 2002/03, to 7% in 2014/15, after which the figure has since increased slightly to 8% in 2018/19.

Chart 3: Percentage of homelessness applicants in 2018/19 who slept rough the night before applying 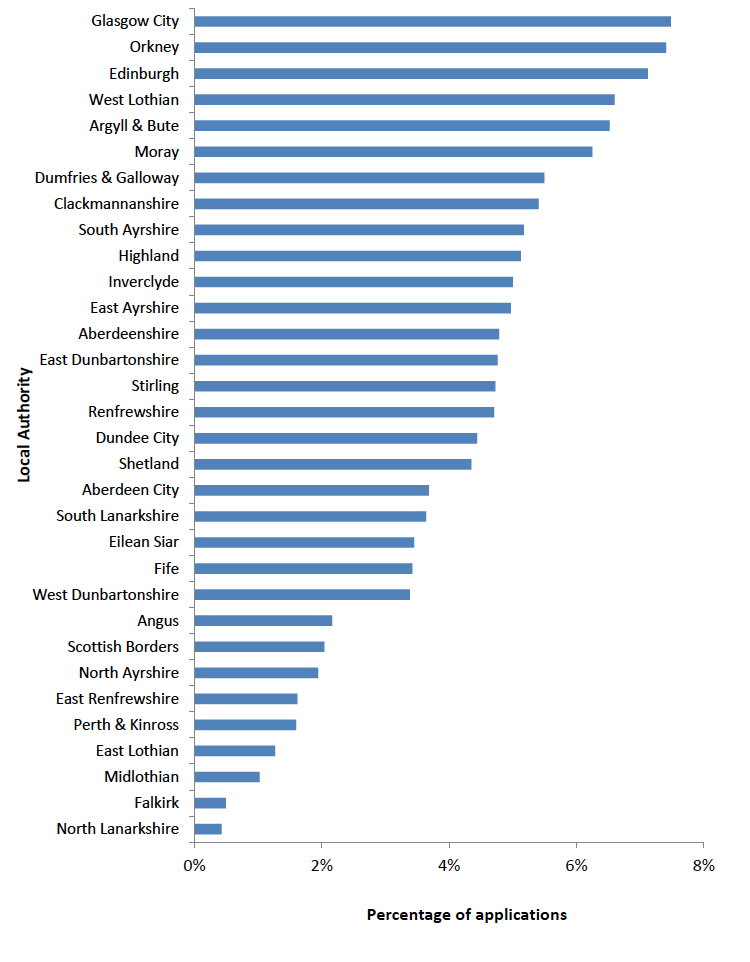 Prior circumstances of applicants

Chart 4: Prior housing circumstances of applicants 2018-19 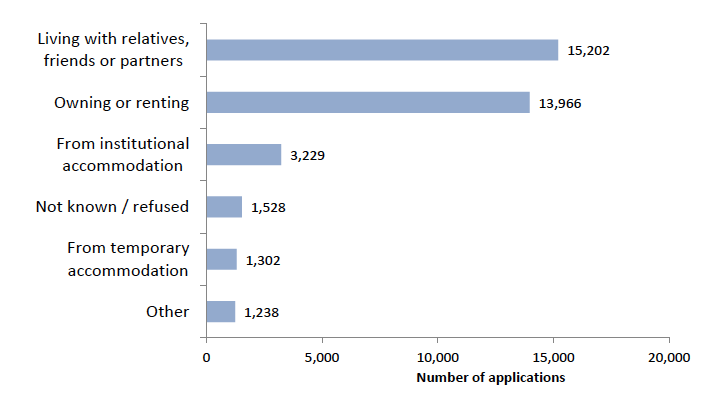 Over the past decade the characteristics of applicants have not changed much, fluctuating at most by only a few percentage points. The majority of applicants tend to be single, younger males, of White Scottish ethnicity.

A third of applications were from those aged 25 to 34 years (33% for both male and female). The proportion of total applicants for those aged 34 and under for males was 54%, and 61% for females. This has decreased over time by several percentage points (from 63% males and 69% for females in 2002/03 for example).

88% of applicants were of White ethnicity (76% were of White Scottish ethnicity). The proportion of those identifying themselves as in Other ethnic group has increased over time, from about 1% in 2002/03 to about 4% in 2018/19.

About 3% were previously a member of the Armed Services (Table 4). Around 7% were formerly looked after by a Local Authority in Scotland (Table 5). Proportions of applications from these groups have largely remained the same in the past decade, although the actual numbers have reduced overall in line with overall reductions in applications.

Some applicants (4% of all homelessness applications in 2018/19) reported that their accommodation was no longer available due to such things as rent arrears or mortgage defaults. Meanwhile, 6% of applications are from those leaving prison/ hospital/ care or some other institution. 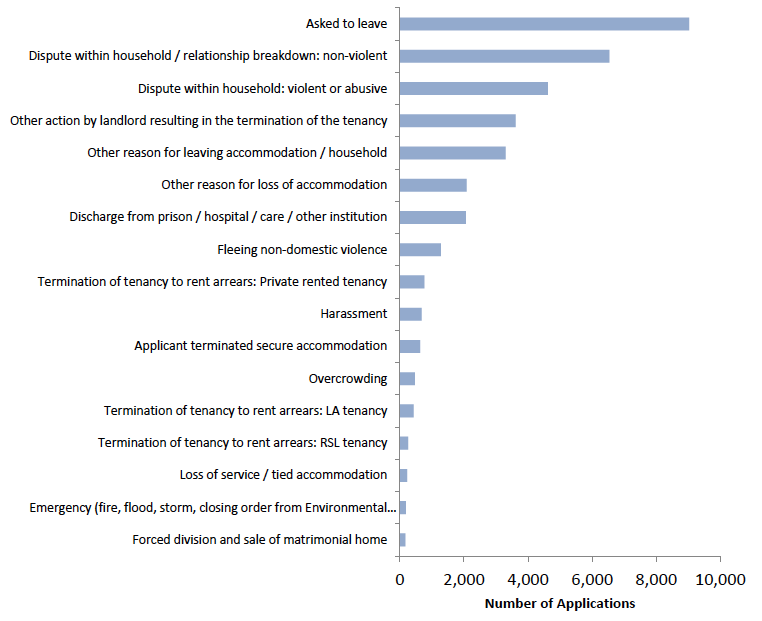 As the causes of homelessness can be complex and not the result of a single incident or event, 67% of applications cited additional reasons (See Chart 6 and Table 10). 44% of those completing the question cited that their reason for homelessness was 'not to do with the applicant household'. This includes reasons such as the landlord selling the property, fire, circumstances of other persons sharing the property or harassment by others. Other cited factors to note include 'mental health reasons' (25%), lack of support from friends/family (23%) and 'financial difficulties, debt or unemployment' (20%). 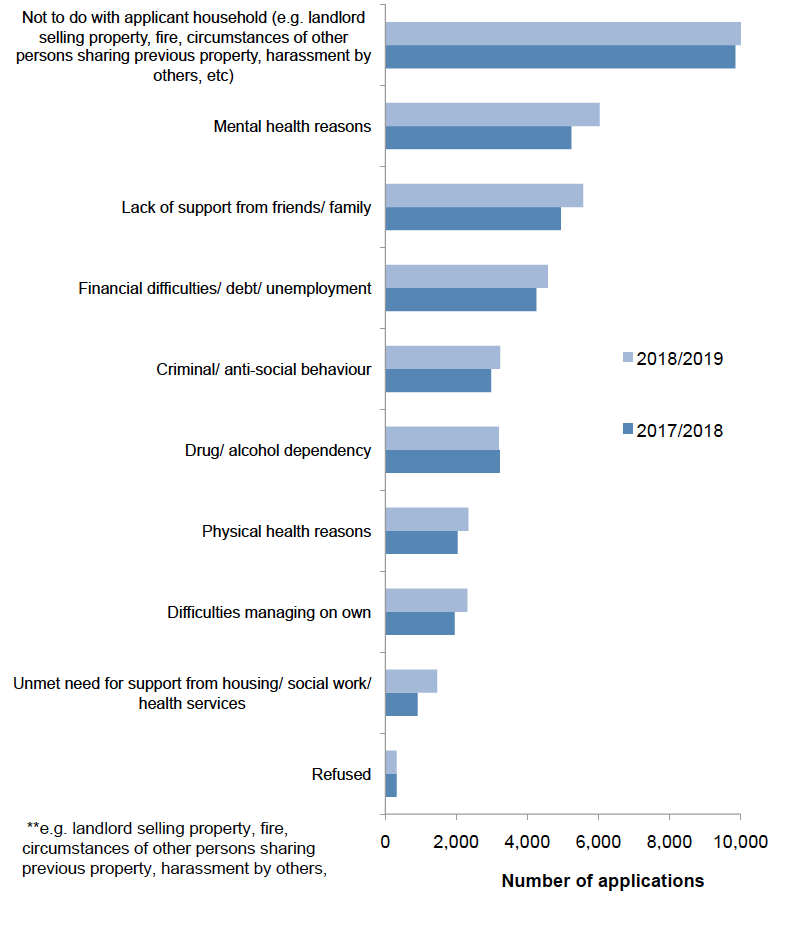