3. Withdrawing a child from school

3.1 Why parents choose to home educate

It may be helpful for the local authority to know if the reason is dissatisfaction with the school, or problems, such as bullying, being faced by the child at school.

Under Section 35 of the Education (Scotland) Act 1980, parents of a child who has been attending a public school 4 must seek the local authority's consent before withdrawing their child from that school, and the authority must not unreasonably withhold consent. It should be noted that while consent is needed for withdrawal from school, consent is not needed to home educate in itself.

Consent is not needed in the following situations:

Although there is no statutory duty upon parents to inform the local authority that they are home educating if they do not require consent, many authorities would prefer home educators in their area, or moving into their area, to contact them.

3.3 Withdrawing the child from school - the process

Procedures for considering a parent's request to withdraw a child from school should be fair, clear, consistent and without delay. Local authorities should remember that home education is a key aspect of parental choice, and that consent to withdraw a child from school should not be unreasonably withheld. On the other hand, sufficient time must be allowed for local authorities to take an informed decision on an important matter which will have an effect on the child's future learning.

The following checklists are suggested as good practice:

Is there anything in the child's record to cause concern?

Is there evidence of the intention to provide efficient and suitable education?

Points to bear in mind

3.4 Appeals by parents against a local authority's decision

There is no statutory right to appeal against an authority's decision to withhold consent to withdraw a child from school. However, all decisions should be reviewed internally by local authorities on request. Local authorities should provide parents with details about their complaints procedure. Decisions made by authorities under their statutory powers are also generally subject to external review by the Court of Session through the judicial review process. Some local authorities have mediation services and the existence of these should be made known to home educating families. Parents may also choose to pursue the matter with the Scottish Public Services Commissioner (Ombudsman).

Some families may have lifestyles which mean they move or travel, sometimes seasonally, between local authority areas, sometimes for work or cultural reasons, for example Gypsies and Travellers. The same considerations for consent to withdraw from school, and for ongoing contact, apply to these families. Some Traveller families have arrangements in place whereby children are on a school roll and attend for part of the year, using means other than home education to maintain continuity in learning while travelling. Only where children do not attend any school, and where the education is provided predominantly by the parents, should the arrangement be considered to be home education.

Local authorities may occasionally receive a request to withdraw a child part time from school, e.g. for the child to attend school only on certain days, or for certain subjects. The feasibility of each request should be considered on its own merit, while taking into consideration that under Section 28 of the Education (Scotland) Act 1980 ' so far as is compatible with the provision of suitable instruction and training and the avoidance of unreasonable public expenditure, pupils are to be educated in accordance with the wishes of their parents' . Ultimately, however, it is a decision for each local authority and school as to whether they can support such an arrangement. 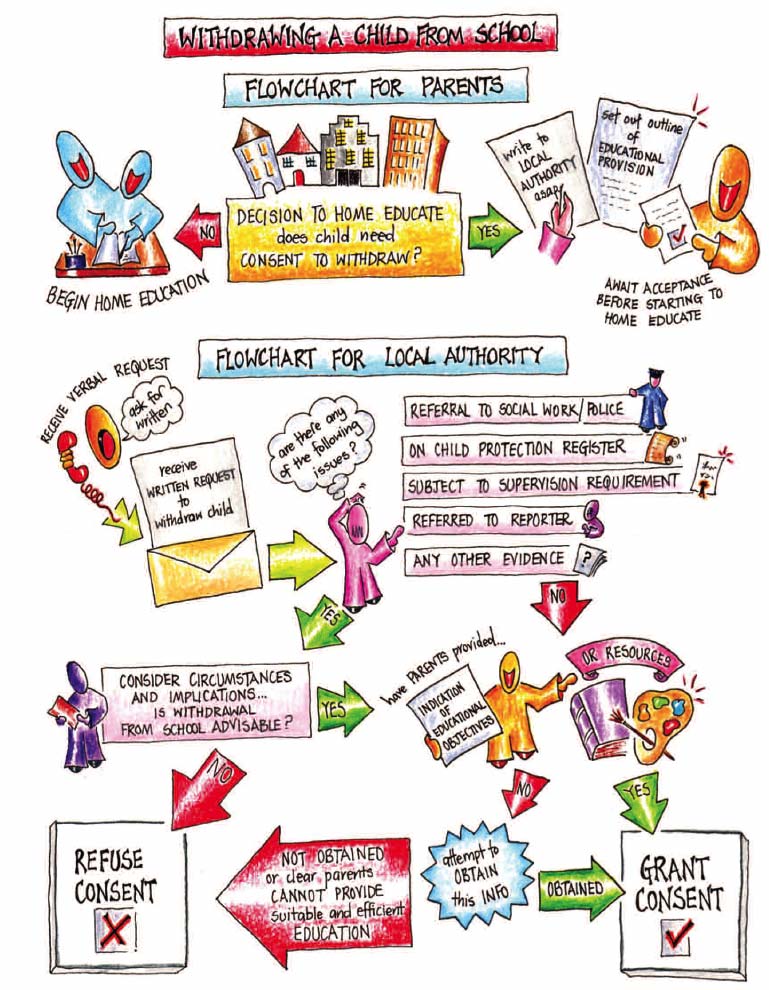