The Committee of Advertising Practice ( CAP) is the sister organisation of and is administered by the Advertising Standards Authority ( ASA). The CAP is responsible for creating and maintaining the UK code of non-broadcast advertising, sales, promotion and direct marketing which regulates non-broadcast marketing communications.

Projects or programmes tackling locally identified barriers to a healthy diet, for example a community-run café in a low income neighbourhood or a community garden run with people who are homeless.

In its report, The Scottish Diet - It needs to change 2018 update, FSS describe discretionary foods and drinks as high in calories, low in nutritional value and not necessary for our health. They tend to be heavily promoted and represent an unhealthy proportion of our overall diet. In the report FSS include: confectionery, cakes, biscuits, pastries, savoury snacks and sugary drinks. They are a subset of HFSS foods.

A collective term used in this report for food and drink.

The food environment comprises the foods available to people in their surroundings – and includes the nutritional quality, safety, price, convenience, labelling and marketing of these foods. This includes supermarkets, convenience stores, cafés, restaurants, takeaways, work and school canteens, and all other venues where people procure and eat food.

The unfair and unavoidable differences in people's health across social groups and between different population groups.

The pathway presents a core home visiting programme to be offered to all families by health visitors as a minimum standard. Along with these core home visits health visitors exercising the function of a Named Person on behalf of their Health Board will be required to be available and responsive to parents to promote support and safeguard the wellbeing of children by providing information, advice, support and help to access other services.

Healthy Start Vouchers are being devolved as part of the Welfare Foods provisions of the Scotland Act (2016). They are currently administered by Department of Health and provide low income pregnant women and children under the age of four with vouchers worth £3.10 per week to purchase fruit, vegetables and milk (one for pregnant women and those with a baby under the age of one; and one for each child in the family under four-years old). It will be integrated with the Best Start Grant (Scottish replacement for the Sure Start Maternity Grant) following commencement.

Foods which are high in fat, sugar or salt.

Body Mass Index ( BMI) is the most commonly accepted measure of overweight and obesity.

Weight in kg divided by the square of height in metres. Adults (aged 16 and over) can be classified into the following BMI groups:

FSS will consult on an Out of Home Strategy. It will cover all food consumed outside the home, including food eaten "on the go". Takeaway food consumed in the home will also be included.

Population health is an approach to health that aims to improve the health of the entire population and to reduce health inequities among population groups. In order to reach these objectives, it looks at, and acts upon the broad range of factors and conditions that have a strong influence on our health. This broader notion of health recognizes the range of social, economic and physical environmental factors that contribute to health.

Promotion is advertising a product or brand, generating sales, and creating brand loyalty.

PHE Reformulation Programme – A UK Government policy, launched in their Childhood Obesity Action Plan (2016) and administered by PHE, that sets a target for manufacturers to achieve a 20% sugar reduction by 2020 with a (5% in the first year) across the top nine categories of food that contribute most to intakes of children up to the age of 18 years.

The Goals describe, in nutritional terms, the diet that will improve and support the health of the Scottish population. They are set at the Scottish population level. They indicate the direction of travel, and assist policy development to reduce the burden of obesity and diet-related disease in Scotland. They will continue to underpin diet and health policy in Scotland and will be used for scientific monitoring purposes.

The Soft Drinks Industry Levy is a UK Government policy proposal featured in the 2016 Childhood Obesity Action Plan. The proposed levy will apply to the production and importation of soft drinks containing added sugar. The levy took effect from April 2018. 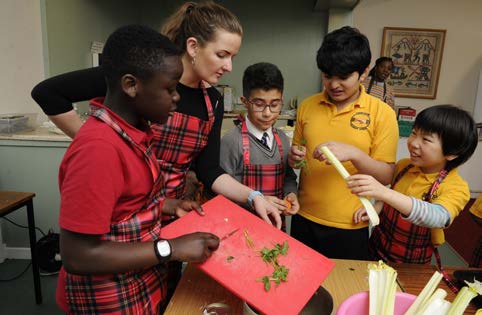 Traffic light labelling is a front-of-pack nutrition labelling scheme to help consumers see, at a glance, what is in their food. The label is colour-coded red, amber and green, and highlights 'percentage reference intakes' (formerly known as guideline daily amounts), to show how much fat, saturated fat, salt, sugar and energy is in a product.

Red colour coding means the food or drink is high in this nutrient and we should try to have these foods less often or eat them in small amounts.

Amber means medium, and if a food contains mostly amber you can eat it most of the time.

Green means low, and the more green lights a label displays the healthier the choice.

Type 2 diabetes occurs when the body doesn't produce enough insulin to function properly, or the body's cells don't react to insulin. This means glucose stays in the blood and isn't used as fuel for energy. Type 2 diabetes is often associated with obesity and tends to be diagnosed in older people. It's far more common than type 1 diabetes.