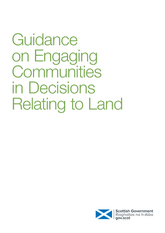 Annex A: Fairness, Rights and Equalities

1. In terms of engagement, fairness means everyone involved in an engagement process having an equal opportunity to be heard or to participate in the process, if they have an interest in doing so. It means recognising that all participants not only have the right to air their views and participate, but that everyone involved should be actively welcomed, recognising that they can bring something positive to the process.

2. Anyone involved in an engagement process, whether as land owner, tenant or land manager, community member or any other person involved, should expect to be treated with dignity and respect. This includes welcoming minority viewpoints, even where they are unpopular.

3. It should always be remembered that community engagement about issues relating to land is an opportunity to develop practical results which can improve outcomes for some or all of the participants and support the wider public good. Even where some negative outcomes are unavoidable, such as temporary disruption, engagement should provide a fair opportunity to find ways of mitigating these.

5. While community engagement can sometimes involve difficult discussions, no person can reasonably be expected to take part in an engagement process they find intimidating. Every effort should be made to ensure that the engagement process provides a safe and supportive opportunity for everyone to discuss the issues at hand and make their views known.

7. Everyone involved should have the opportunity to express their views without prejudice to any aspect of their person, such as their socio-economic status, gender, sexuality, race, age, religion or ethnic background, political views, dwelling place or lifestyle.

8. All of us have human rights and they apply equally to all of us, regardless of who we are.

10. Land is a resource which enables the fulfilment of a range of rights, such as the rights to employment, sustained improvement in living conditions, housing, food and clothing, and ensuring that women benefit equally with men from any land related measures.

12. Article 1 Protocol 1 (A1P1) of the ECHR provides protection against the unlawful taking of a person’s property by the state.

13. Article 14 of the ECHR prevents discrimination in the enjoyment of the other rights under the Convention. Article 14 is not a standalone right, and must be read in conjunction with another right under ECHR. For example, in pursuing a policy of allowing community rights to buy land, which engages the A1P1 rights of individual landowners, while that policy may be justifiable, it is not permitted to apply the policy in a discriminatory way (for example by granting or refusing applications on the basis of a person’s nationality).

14. The International Covenant on Economic, Social and Cultural Rights ( ICESCR), the Convention on the Elimination of All Forms of Discrimination against Women ( CEDAW), and other internationally agreed conventions outlining economic, social and cultural rights to which the UK is a signatory, are binding on the UK state in international law. The term “state” in this context includes all emanations of the state such as devolved administrations, which includes the Scottish Government, local authorities and other public authorities.

16. For instance Article 14 of CEDAW requires that women benefit equally with men from rural development programmes, and have equal access to credit as men do. This links with requirements for gender equality under the Equality Act 2010, and the Scottish Government would like to see all those taking significant decisions about land consider if their decisions are an opportunity to address the gender imbalances within society.

17. As an example, this can be achieved by ensuring that decisions about land contribute to women having equality with men in terms of ownership of land, income derived from land, and decision making powers over land. It is vital that in any community engagement process, women and men are able to participate and benefit equally from the process.

18. Of particular importance for this guidance are Article 6 and Article 11 of ICESCR. These Articles provide for the right to work and the right to an adequate standard of living, including the right to adequate food and housing and the right to a continuous improvement in living conditions. The Scottish Government expects community engagement where decisions about land, or a lack thereof, are likely to lead to a significant impact in terms of these articles.

19. This guidance does not affect existing land owning or land management rights, such as those under property law, tenure law, and A1P1 of the ECHR, which protects the right of persons to enjoy their property peacefully. These rights apply equally to all people regardless of how much property they own, and such rights are protected by the courts.

20. It should be remembered that a person’s property rights are not absolute under A1P1. In certain exceptional circumstances a person’s property may be transferred, even against their will, where it can be shown to be in the public interest. An example of this is where government or local authorities use compulsory purchase powers, for instance in order to build a road or railway, or to promote socio-economic development.

21. All compulsory transfers of land must be in accordance with legislation that is in force, must be in the public interest, and must be proportionate to the aims being pursued. The way in which such transfers are made is subject to supervision by the courts.

22. The interaction between property rights and economic, social and cultural rights are complex. Applying them to decisions about how land is used may also be complex.

23. A decision about land is usually ultimately one for the land owner or their delegate. However, where a number of land related interests are involved, a consideration of what is reasonable, proportionate and necessary may be helpful. Finding solutions which benefit all parties involved is the ideal to which this guidance expects both land owners and local communities to work towards. Even if this is not always achievable it may help to establish working relationships which could create opportunities or help in tackling other issues which may arise.

Voluntary Guidelines on the Responsible Governance of Tenure ( VGGTs)

24. In terms of internationally accepted principles and standards for responsible practices in relation to land, the Land Reform (Scotland) Act 2016 states that these are to include the principles and standards contained in the VGGTs. The goal of the VGGTs is to support the progressive realisation of the right to adequate food and national food security. They promote secure tenure rights and equitable access to land, fisheries and forests, as a means of eradicating hunger and poverty, supporting sustainable development and enhancing the environment. They state that responsible investments “should do no harm”. Community engagement should support the goal of VGGTs by allowing a wider range of perspectives to be taken into account prior to any major investment decisions relating to land.

25. Community engagement is for all of Scotland, but it is particularly important that those living within areas of poverty and deprivation are engaged in decisions about land that affect them. This is because it offers communities in those areas opportunities to improve the natural and built environment in which they live and work, influence how local services are provided, find opportunities for growing the local economy, and it opens up opportunities for participation and community empowerment.

26. In relation to poverty and social inequality, Articles 6 and 11 of ICESCR, which have been discussed above, are very relevant. As discussed, these Articles provide for the right to work and the right to an adequate standard of living, including the right to adequate food and housing and the right to a continuous improvement in living conditions. It is particularly important that people living in areas of poverty and social deprivation, in both urban and rural Scotland, are given the opportunity to engage with decisions about land that can help them improve their conditions in line with Articles 6 and 11 of ICESCR.

27. Areas of poverty exist in both rural and urban Scotland. The Scottish Index of Multiple Deprivation [10] is one tool sometimes used to show these.

28. Actions, or lack of actions, when taking or considering decisions about land can impact on other people. This not only relates to planning and implementing decisions, but also consulting and engaging with others, including local communities. The Equality Act 2010 prohibits discrimination against anyone who shares one or more of the protected characteristics listed [11] and we advise anybody taking decisions relating to land to make themselves aware of the requirements of the 2010 Act.

29. The protected characteristics in the Equality Act [12] are:

30. The Equality Act 2010 provides the legislative framework which protects people who are recognised as a distinct ethnic group from being discriminated against on the grounds of ethnicity.

31. It is important to ensure that ethnic groups are included in any community engagement.

32. For example Scottish Gypsy/Travellers are a group which can be defined by reference to their ethnic origins and can therefore be afforded legal protection under the Equality Act 2010.

33. Members of the public also have rights under the Aarhus Convention [13] , including the right to participate in environmental decision making. Under the terms of the Convention, arrangements are to be made by public authorities to enable the affected public and environmental non-governmental organisations to comment on certain proposals. This includes proposals for projects affecting the environment, or plans and programmes relating to the environment. These comments are to be taken into due account in decision making, and information is to be provided on the final decisions and the reasons for those decisions.

References
Diagram B: How to Engage