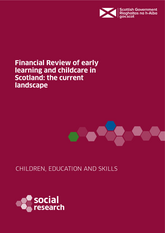 The landscape of early learning and childcare in Scotland is undergoing transformative change. Through the 2014 Children & Young People (Scotland) Act the annual entitlement to free Early Learning and Childcare provision increased from 475 hours (12 hours a week over 38 weeks) to 600 hours (or 16 hours a week over 38 weeks) for all three and four year olds, and for those two year olds who stand to benefit most. This was accompanied by increased flexibility of provision to meet the needs of parents.

The sector is now starting to move rapidly towards almost doubling the level of entitlement to ELC provision to 1,140 hours per year by the end of the current parliamentary session.

A solid evidence base is required to support Scottish Government, local government and partner organisations in planning and preparing for the changes ahead. The Scottish Government announced in February 2016 that it would conduct a Financial Review of the provision of the free entitlement to early learning and childcare as a major contribution to building that evidence base.

The key elements of the Financial Review are:

This Report details the findings of the Financial Review and captures a snapshot of the whole ELC system as change is introduced and further change is being planned for. It contributes to the available evidence to inform the planning and development of delivery options for the expansion of the funded entitlement.

Provision of the funded entitlement

We estimate that around 136,000 children are eligible to receive the free entitlement to ELC each year. Around 7 per cent of the population of two year olds and close to 100 per cent for three and four year olds have been recorded to take up funded ELC at the start of the last academic year. Overall this means that around 125,000 children and their families benefit from free ELC each year.

In the first three years after implementation of the CYP Act, 2014/15 to 2016/17, the Scottish Government has provided local authorities with an additional £329 million to cover the additional revenue costs of the ELC elements of the CYP during those three years.

During the same period, final net expenditure figures from 2014/15, provisional outturn figures for 2015/16 and budget estimates for 2016/17 indicate that local authorities spent or plan to spend an additional £189 million on pre-primary education over the three years compared to continuing spend at 2013/14 levels.

Expenditure on provision of ELC in local authority settings is dominated by staff costs which account for over 80 per cent of the total.

The unit costs above, combined with the number of children registered and the average hours of the entitlement within financial year 2014/15 gives an expenditure estimate of around £249 million on funded ELC in local authority settings.

Given the number of places procured from partner providers and the average hours of the entitlement by age group, the amount spent by local authorities on procured ELC is estimated at around £78 million in financial year 2014/15. This gives an overall estimate of expenditure on the funded entitlement of £327 million.

Ipsos MORI Scotland was commissioned by the Scottish Government to survey private and not-for-profit ELC providers of the funded entitlement across Scotland about their costs for delivering ELC. [2] An online survey of 965 partner providers collected detailed information about costs, income, capacity and occupancy. Responses were obtained for 222 settings (22 per cent of all partner providers) across the range of provider types, size, area of Scotland and level of deprivation.

The research showed that the average cost for one hour of ELC for 0-5 year olds at partner providers is estimated at £3.70. (£3.69 in private settings, £3.72 in voluntary settings). Given different staff ratios by age, we estimate that costs for three and four year olds could be up to 15 per cent lower than this and costs for 2 year olds up to 20 per cent higher.

As in local authority settings, costs are dominated by the staff component which comprises 70 per cent of the total.

The large difference between costs in partner provider and local authority settings can be explained by the gap in staff costs. On average, for an early years practitioner, the public sector spends two thirds more than the voluntary and 80 per cent more than the private sector on staff-related costs (wages, pensions etc). If partner providers were to pay public sector wages, they would have to charge at least at the cost level of public provision.