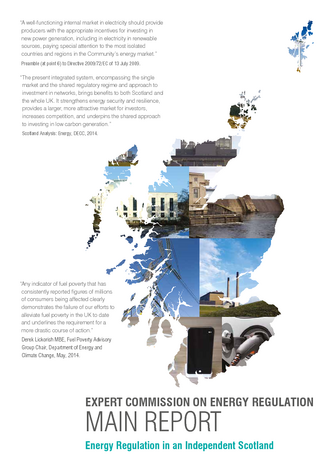 Energy is an essential part of our modern world. Its ready availability underpins most aspects of our daily lives at home, at work and in our leisure time. Providing the heat and power we need on tap comes at an economic and environmental cost, and its efficient supply depends on a complex infrastructure that creates natural monopolies.

As a result, all Governments face the challenge - the energy trilemma - of providing their citizens with secure, affordable, and low carbon power. To deliver that, the electricity and gas industries require regulation to drive competition, safeguard the environment, protect consumers and the public and create the predictable market conditions that encourage necessary investment.

Historically, the UK's power industry has delivered reliable and competitive supplies. In recent years, the challenge of decarbonising the sector, incentivising innovation and new investment and addressing affordability has required new approaches.

The major political parties all support the proposals for Electricity Market Reform ( EMR) being introduced to encourage investment. Where the parties differ tends to be in the areas of consumer protection and price regulation, the generation mix required to meet environmental and economic objectives and the level of intervention required to optimise market outcomes.

Those differences matter because they create uncertainty in a sector that requires circa £200 billion of investment across the UK in the coming decade to 'keep the lights on' [1] . Worryingly, against a background of UK capacity margins declining to the lowest levels for decades, markets are failing to offer price signals that will justify new investment, while consumer trust in the industry and its regulators to deliver just and affordable outcomes is at an all-time low [2] .

At the same time, the impact of the recent recession and climbing consumer prices has heightened the need to tackle energy efficiency and address fuel poverty effectively. The Commission has spent much of its time on this area, recognising the current imperative of affordability. However, concerns on security of supply both internationally and in terms of tightening capacity margins - and the need to mitigate climate change - are also clear priorities.

The Commission has primarily focused on the electricity sector given the complexity of the issues faced there. However, the question of the regulation and operation of gas networks and markets is important and raises a number of points - some are specific to gas, whilst others are germane to both electricity and gas markets.

Gas is a globally traded and storable commodity. Scotland's access to gas supplies, some of which lands at St Fergus, should not be unduly affected in the event of independence. Continued regulation of the high pressure gas transmission network, currently owned and operated across the whole of the UK by National Grid, will come under scrutiny and may require some restructuring. However, in principle, this should be relatively straightforward if there is sensible cooperation between the Scottish Regulators and their counterparts. Northern Ireland's gas originates from a supply point in Scotland. Other areas, such as regulation of low pressure distribution network costs, storage and safety should be capable of being dealt with at a national level, albeit that cooperation amongst regulators to set common standards and arrangements would be beneficial.

Oversight of gas quality and composition is also important for consumer protection. Retail market arrangements for gas in Scotland, like the electricity retail market, is an area that would need to be governed by the combined economic regulator along with oversight from the proposed Scottish competition authority to ensure retail competition and fair pricing.

Our Interim Report issued in October 2013 set out key assumptions which we took as givens in addressing the questions posed. These assumptions included Scottish independence, the implementation of EMR, a multi-utility approach to regulation and continuing integrated transmission networks and wholesale markets for gas and electricity. We also assumed that Scotland and the rest of the UK remain in the EU, bringing with it the current economic, social, environmental and structural requirements the EU places on independent regulators or Member States as it drives greater market integration across Europe.

The EU provides a framework and indeed some protection for smaller Member States, but it is not a straightjacket. The current devolved arrangements in the UK already allow for different energy related policies, principally in the areas of energy efficiency, fuel poverty and renewables. Each jurisdiction will inevitably have different policy priorities, and over time they may change.

A multi-utility regulatory model makes sense for smaller nations. An independent regulator that is credible and able to respond to periods of stress while providing a consistent regulatory approach to underpin a stable investment climate is important for any nation and particularly so given the prominence of energy in the Scottish economy.

Any regulatory system has to be designed to remain robust and effective through changes of administration and policy. In Scotland's case the administration in 20 years' time may have a quite different outlook on energy than that we see today. The power system it oversees will have radically changed as we move to decentralised generation and empowered consumers in a low carbon world.

In addressing the questions we took a longer-term view, beyond the necessary period of grandfathering existing arrangements through a managed transition, to consider the needs of a Scottish Government facing a markedly different energy system in the 2020s and beyond.

The issues we are considering will be important whatever the outcome of the referendum. Under any political scenario, markets, regulation and policy will change over time.

That means setting our sights above the current political debate. The Scottish Government set out one vision of a new world in Scotland's Future in November 2013. The UK Government published its Scotland Analysis: Energy in April 2014. Both positions can be expected to adjust in the negotiation that would follow from a vote for independence. We have tried to address the questions posed to us rationally and without bias on the basis of sensible cooperation and mutual interest between the administrations that share our common island. This has been assisted by the cosmopolitan composition of the Commission, drawn from across the UK.

I would like to record my thanks to the members of the Commission who have voluntarily, diligently and generously committed their time and talents to the task we were set. Similarly, I would also like to thank Rebecca Whyte, Neal Rafferty and particularly Chris Bronsdon, our secretary, for their support, forbearance and insight over the last nine months.