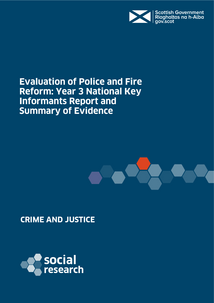 In the journey to transformation respondents felt that both services face a range of challenges but are also creating opportunities in how to address these. These challenges include having an approriately skilled workforce and leadership to undertake transformation; changes to organisational culture; the impact the changes are having on the workforce; effectively consulting and communicating internally and externally; and achieving efficiencies.

A skilled workforce and leadership

Starting to move into the transformative phase and ask questions of where the services should be, are identified as significant challenges and one that requires appropriate skills and expertise to undertake it. The Year One evaluation report recommended undertaking regular reviews of skill requirements needed for transformational change, with a need for a wide range of expertise as the services enter ‘transformation’.

A challenge identified by the service is having the skills and knowledge in place to not only continue to carry out the roles and responsibilities as emergency services but also create and deliver a vision for transformation. For several interviewees, the focus should be on the skills and knowledge required for the leaders of the services, including abilities in programme and change management, high levles of adaptability and flexibility and strong communication skills.

SFRS interviewees highlighted the importance of strong support from the leadership for change. Due to the diversifying of the firefighter role, having softer skills to develop the prevention role was also seen to be a key skill for the leadership teams. Effective communication and engagement was valued by SFRS, with an acknowledgement that there was a need to improve this when going into the next stages of reform. As such, the management team are in the process of visiting stations across Scotland to communicate the vision for the future of the service. It is also suggested that SFRS have taken professional help in engagement and analysis to prepare them for transformation and ensure they are taking a structured approach.

In Police Scotland there was an acknowledgement that in the early stages of reform many in the leadership lacked the skills and knowledge for transformaitonal change. However, they have now invested in professional programme managers and change managers from outside the service with the required expertise for the next stages of reform to deliver Policing 2026 [16] .

As has been identified, having clear strategies, leadership and skills in place, are essential as the services move into transformation. However, another critical element is changes to the organisational culture which existed under legacy arrangements. Year one of evaluation highlighted how reform involves cultural as well as structural change and that there may be tension between ‘old’ and ‘new’ ways of working.

In relation to the journey to transformation, SFRS interviewees had differing views on the impact of the changes on the culture of the service. One view was that there had been a shift in the last couple of years, with firefighters now viewing themselves as part of a national service rather than legacy arrangements while others felt that culture change will take a generation:

‘Culture change will take at least a generation…Its myth and legacy and all of that bit that's all wrapped up in it and to change that is debatable, it's part of your history, you can't change history. You can try and change people's attitude towards it but some people will always live in history’ (5 partner interviewee)

For Police Scotland, there was a view that there has been a significant change in culture through a move away from a focus on performance to empowerment and greater localism. It was however, identified that it is necessary to build a culture of trust, confidence and learning from mistakes. As in SFRS, there was also recognition that the emotional attachment that officers had to legacy arrangements will take years to work through.

Impact on the workforce [18]

The next stages of transformation will have a major impact on the workforce of both organisations. For SFRS there will be much more of a focus on creating a preventative service, requiring a culture shift for firefighters who have traditionally seen their role as more reactive and senior management recognise that the workforce will require support and to be listened to through this transition:

‘A lot of fire-fighters joined the Fire Service because that...they want...they're intelligent, they're articulate, but they're action focused. They want to do that type of activity so the shift that we've made from an emergency response to a preventative service has been a big...don't underestimate the culture and the psychological shift that we've made to do that. And to extend the role it will also involve a cultural and a psychological shift for our workforce and we need to focus on that, and we need to support that change’ (12 SFRS interviewee)

Prevention has been a key part of the fire fighter role for several years. However, to try to acknowledge the impact on the workforce due to the widening of the prevention role, SFRS have conducted a cultural audit of the organisation, which resulted in an action plan being produced and they are monitoring progress in this area on a regular basis.

It is generally felt that local police officers have experienced a lot of changes already in the reform process due to the cumulative effects of reductions in police staff, redeployments to specilaist units and the restructuring of beat areas. This has led to some concern that the workforce are experiencing ‘change fatigue’ (3 Police Scotland interviewee) although other interviewees emphasised that officers are also frustrated about not being involved in shaping the change that is occurring. As such, a key success factor for transformation identified by several interviewees is the ability to meaningfully engage the workforce:

‘I think that varies in different areas and different departments or staff groups, but I think, broadly speaking, people are actually not fatigued by change. I think they're fatigued potentially by not being involved or not being able to shape the change that, quite rightly…I think the appetite to see the type of change that we've described, if it truly supports people in their role and allows them to do their job better in a more effective way, is something that broadly people would welcome, and have welcomed in the consultation and engagement that we've done’ (10 Police Scotland interviewee)

‘I think that the transformation journey, if you go back a bit, and is true all the time, is the thing we didn’t do well was actually communicate’ (8 Police Scotland interviewee)

There were however, different views about how the process was undertaken. Partners expressed concern as to how meaningful and representative the consultation was, while interviewees from Police Scotland suggested that the approach was not just about quantity of responses but also about interacting with different members of the community [20] .

‘So we got a huge level of kind of responses. It's not all about quantity, but I think the quality of how we designed the interactions as well, that the public consultation exercise wasn’t about just receiving replies from people who chose to interact with us. We went out to people that we thought had a stake in policing, and found different ways through a kinda themed approach’ (10 Police Scotland interviewee)

Police Scotland interviewees recognised that during the first few years of reform they have not effectively communicated about the changes. However, in the development of Policing 2026, communication is now a priority both internally and externally. Despite this, some of the partners still felt that there had been a lack of communication from Police Scotland about how they intend to take transformation forward (4, 16).

One of the biggest challenges facing the services is achieving. SFRS interviewees indicated that the organisation is on track in making sustainable savings and this is even described as having been the ‘easy part’ (1 SFRS interviewee). This has been achieved through shutting the headquarters, merging control rooms, reducing the number of strategic managers and reducing duplication. Despite these savings, the predominant belief is that fires are still reducing and the public have not experienced any changes in the service they receive. However, it is identified that there is still more to be done and that a challenge will be the continuous impact on the budget. Concerns were also raised about where the fire service will sit as priority in terms of public spending in the future. As such, suggestions were made about how the service can manage these uncertainties, including, building flexibility into the transformation programme in how they design and deliver the service, focusing on prevention, looking at different crewing models and distribution of resources and creating national terms and conditions for the workforce:

‘Both prevention and flexibility, that’s what allows us to, we think, deal with whatever financial scenarios come our way’ (7 SFRS interviewee)

Police Scotland interviewees highlighted the challenges in realising efficiencies. Several respondents suggested that the savings required were unsustainable. Partners also stated that savings that had been made had led to inefficiencies; for example, police officers are backfilling support staff roles, leading to officers being less available to support communities.

Partner organisations also suggest that Police Scotland will struggles to achieve a balanced budget in the next 3 years but that better joint working between the emergency services could help. Police Scotland interviewees also highlighted that though they would like to move to a co-production model with other organisations, this is challenging as they work with yearly budgets and they are therefore unable to commit to long-term strategies with partners. Public finances are identified are being an ongoing challenge but that potentially more efficiencies could be gained in the corporate services [21] .

Some wider implications of reform
Journey to transformation