Different types of owners have acquired Scottish estates and land, including corporate bodies, overseas owners, and environmental organisations[2] (Fig. 1 below). Eight of these environmental organisations own a combined total of 202,391 ha or the equivalent of 2.6% of Scotland's total land area. Non-Governmental Organisations (NGOs') owned and managed land is relatively widely distributed, with particularly large areas evident in the Cairngorms, the Flow Country and the West Highlands.

Direct purchase of land has been motivated by a number of reasons, including: protecting and restoring wildlife, habitats, and outstanding scenery; responding to threats from inappropriate development; ensuring access to nature for the public[3]. NGOs continue to buy land, however their objectives and target areas tend to evolve. For example, with the Land Reform Act 2003 and the right to roam, purchasing land to ensure public access to nature became less of priority. Instead, attention of some of the NGOs has now shifted to other targets, such as unprotected and unlisted heritage. For other NGOs, the strategic priorities now focus on connecting and expanding their existing estates.

On their estates, NGOs have to work together with tenants and residents living within or nearby the protected areas. Evidence shows that landowning NGOs in Scotland engage in a range of activities relating to community engagement and partnership working. Among others, Scottish Wildlife Trust engages in collaborative working and conducts large-scale partnership initiatives, including Cumbernauld Living Landscape initiative. John Muir Trust advises communities and supports communities that recently came into community land ownership, including for example Knoydart Foundation. In Loch Arkaig, Woodland Trust joined up with Arkaig Community Forest in a collaborative ownership of woodlands. 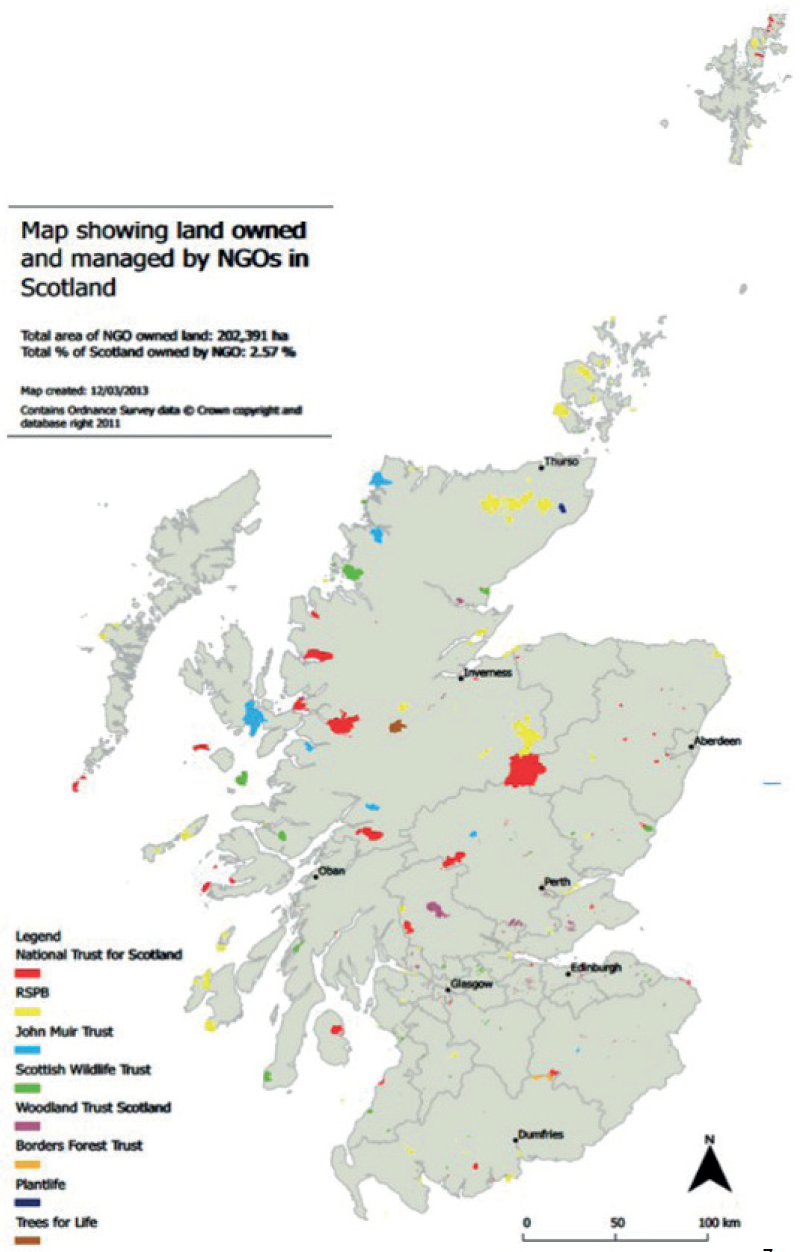 Moreover, the majority of NGOs in Scotland employ local community engagement officers and/or rangers and establish local and regional working groups. Some environmental NGOs also engage in direct partnership working with communities, including supporting the purchase and management of community land and supporting the development of unique community-based ecosystem restoration initiatives[4].

Despite these engagements, environmental NGOs have been subject to criticisms regarding: the lack of formal definition of their roles; a lack of accountability; a lack of awareness and understanding of local knowledge in the places they work; and overlooking local existing capacities and responsibilities[5].

As contemporary research on conservation demonstrates, biodiversity thrives when local people have legally recognised rights to manage and protect their land. The previous model, favoured by large organisations, that ecosystems needed to function in isolation, devoid of people, ignores the growing evidence of the contrary[6].

There is now a push in many environmental protection studies to move away from the idea of a 'preserved wilderness' towards one of the 'working wild' where active engagement with, and sustainable consumption of, the environment play key roles in local development[7]. In Scotland, the cases of North Harris and Gigha demonstrate that when local communities are given rights to their land, they can rework the concepts of nature and sustainability by both protecting the environment and supporting livelihoods[8].

This project was developed in this policy context, in line with contemporary conservation studies approaches, and in relation to the current policy developments. The overall aim of the project was:

(ii) and to provide recommendations on how more effective communication and cooperation between the stakeholders can be fostered to facilitate productive current and future collaborations for the benefit of all.

To achieve that, the project relied on qualitative methodology, prioritising in-depth interviews with key stakeholders in environmental NGOs and community groups. The report is structured around the key themes relating to the perceptions of possible divergence of purpose between NGOs and community groups but also perceived common purpose where the two groups may conceivably work together.

The analysis of the stakeholder's interviews revealed main themes, which will be discussed in the analytical section of the report. In the last section, examples of progressive collaborations and engagements between NGOs and communities will be presented. The report argues that despite major challenges, collaborative partnerships between NGOs and local communities open a wide range of opportunities for progressive models of land ownership and management.