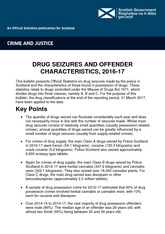 This bulletin presents Official Statistics on the number and type of drug seizures made by Police Scotland during 2016-17. It does not include information on drugs seized by the UK Border Force or British Transport Police, or as a result of Police Scotland activity which led to drugs being seized out-with Scotland.

The data collection process for this bulletin is split into two parts, looking at seizures relating to drug supply and drug possession crimes separately. Police Scotland manually check drug supply-based crimes each year, with these records accounting for the clear majority of drugs seized in terms of quantity. This is supplemented by a sample led by Scottish Government statisticians of the remaining and far more numerous crimes of drug possession. The sample consists of a random selection of 400 crime records per year, stratified by police division to reflect the distribution of drug possession crimes across Scotland. This sample-based approach avoids the need to manually extract data for every crime record relating to a drugs possession crime, which would be a very resource intensive process. The information from the sample is then used to estimate the number of seizures and quantities seized in relation to possession crimes for the most commonly identified drug types for Scotland as a whole. This is done by multiplying the average quantity seized per crime by the estimated total number of seizures for that drug type.

As well as using the sample to record information on the drugs seized from crimes of possession, information about the offender and the circumstances of the crime has also been recorded so that additional analysis on offender characteristics can be presented. As this is the second bulletin which has included this information, data from 2014-15 to 2016-17 has been combined to give a more accurate account of offender and crime characteristics.

It should be noted that care must always be taken when making comparisons on this topic as there can be very large fluctuations in the quantity of drugs seized from one year to the next. Data on the quantities of drugs seized prior to 2014-15 can be found in the 2013-14 publication.

There are two statutory requirements for the UK to provide data on drug seizures, which are managed by the UK Focal Point on Drugs, based at Public Health England. The UK Focal Point on Drugs collate drug seizures statistics from England and Wales, Scotland and Northern Ireland for the UK Focal Point's annual report. This is then submitted to the European Monitoring Centre on Drugs and Drug Addiction ( EMCDDA) and the United Nations Office on Drugs and Crime ( UNODC). These data inform the EMCDDA's annual report and the UNODC's annual World Drugs Report.

The minimum data requirements to satisfy these two obligations are to submit data on the number of drug seizures and the quantity of drugs seized for each of the following types of drugs: cocaine, crack, ecstasy-type substances, heroin, LSD, methylamphetamine, amphetamines, herbal cannabis, cannabis resin and cannabis plants. In addition to these ten drugs, this bulletin contains seizures data on methadone, morphine, barbiturates, ketamine, mephedrone, anabolic steroids, diazepam, GHB, temazepam and other benzodiazepines.

The statistics on drug seizures are used to inform National Outcome 9 - 'we live our lives safe from crime, disorder and danger' as well as the Scottish Government's Justice Vision and Priorities. These statistics are also used by a wide range of stakeholders to monitor trends, for policy research and development, and for research purposes.

The 'Drug Seizures and Offender Characteristics' annual statistical bulletin series forms part of a series of bulletins produced by the Scottish Government on the criminal justice system which can be found at: http://www.gov.scot/Topics/Statistics/Browse/Crime-Justice/Publications.

Number of seizures and quantities of drugs seized
Drug Seizures And Offender Characteristics, 2016-17