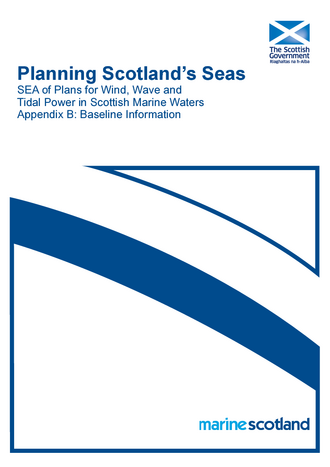 1.5.1 In the context of the marine environment, climate change has been predicted to lead to an increase in water temperatures, rise in sea levels, changes in wave heights and changes to our coastlines. Since 1961, average temperatures in all parts of Scotland have risen for every season [155] and over the last three decades, sea-surface temperatures around the UK coast have also risen by approximately 0.7ºC [156] . At the same time, the seas are becoming more acidic, particularly those to the north and west of Scotland, as increasing amounts of atmospheric carbon dioxide are absorbed at the sea surface. This change in acidity is a concern for marine ecosystems and many organisms that share it [157] .

1.5.2 Sea levels around the UK rose by about 1 mm/year in the 20th century (corrected for land movement) although it is estimated that recent increases have been higher than this [158] . Under projections from the UK Climate Impacts Programme 2009 ( UKCIP09) model, further rises of between 12 and 76 cm are projected by 2095, with lower probability scenarios suggesting this rise could be even greater with the potential for further adverse impacts on coastal areas and transitional waters [159] .

1.5.3 The UK Climate Change Risk Assessment states that there will be more frequent flooding arising from more frequent and intense rainfall, an increase in drought incidents during drier summers, and increases in the frequency of extreme weather events ( i.e. storms and flooding) [160] . Associated changes to sea levels, increased wave height and storm surges could have serious repercussions for marine and coastal environments, and many industries operating in them. There is clear indication that the effects of climate change are already impacting on the marine environment [161] , and this is likely to increase the vulnerability of some habitats and species to future changes in the marine environment [162] .

1.5.4 The Climate Change (Scotland) Act 2009 set out a number of provisions for movement to a low carbon economy, and sets legally binding targets of at least a 42% in greenhouse gas emissions by 2020 and of at least 80% by 2050, compared to the 1990 baseline [163] . Increased use of renewable energy is expected to play a key role in reaching these targets and reducing reliance on fossil fuel combustion.

1.5.5 A number of renewable energy targets have been set in Scotland. The most relevant target is for renewable sources of energy to generate the equivalent of 100% of Scotland's gross annual electricity consumption by 2020, with interim targets of 31% by 2011 having now been met and a new interim target of 50% by 2015. At present, renewables provide approximately 36.3% of the gross annual consumption of electricity in Scotland [164] .

1.5.6 The Scottish Government is committed to adapting to the impacts of climate change that Scotland is already expecting. The natural marine environment is expected to change, and adaptation will be required to minimise impacts and potential loss of species and habitats.

1.5.7 The Scottish Governments Climate Change Adaption Framework highlights trends for sea level rise, air and sea temperature and atmospheric Carbon dioxide (CO2) concentrations which will need to be factored into marine policy development [165] . Data for waves, salinity, turbidity, suspended particulate matter and circulation were said to not currently show significant trends above their long-term daily and inter-annual variations. The Marine and Fisheries Climate Change Adaptation Plan states that marine planning will need to be responsive to climate change to ensure that decision making can take account of a changing marine environment [166] . During consultation on the Sector Marine Plans the Scottish Government will release a new Climate Change Adaptation Programme which will set out more information on adaptation in the marine environment.

1.5.8 A number of organisations have undertaken modelling and research into the potential impacts of climate change. For example, SEPA has mapped coastal flood risk for Scotland, providing a broad indication of potential flood risk [167] . This work identifies the main areas of flood risk from the sea include land adjacent to river estuaries, the heads of sea lochs and the low lying land adjacent to firths.

1.5.9 The Scotland and Northern Ireland Forum for Environmental Research (Sniffer) examined coastal flooding issues in Scotland in 2008, and identified the highest threat of surges being the head of estuaries, most notably the Solway Firth, the inner Moray Firth, the Clyde estuary, the Forth and Tay Firths and Loch Linnhe [168] . The report also mapped potential sea level rise, indicating that sea level rise to the 2080s is likely to be highest in Shetland, Orkney, the Eilean Siar and north coast [169] .