Winter-planted crops increased over the past year. Just under 197,000 hectares were planted in 2018, the highest area since 2014.

Cattle and pig numbers continued to decline, however there were slight increases in the number of poultry with sheep numbers remaining steady.

Agricultural rents rose to an average £40 per hectare.

Hectares (ha): the official measurement of agricultural land. One hectare is 10,000m2 or roughly the same size as a full-size rugby pitch.

Ten-year average: This publication compares current values to the average value over the past ten years. This provides a valuable comparison to previous years and helps set the latest figures in a wider context.

Winter-planted crops increase due to weather 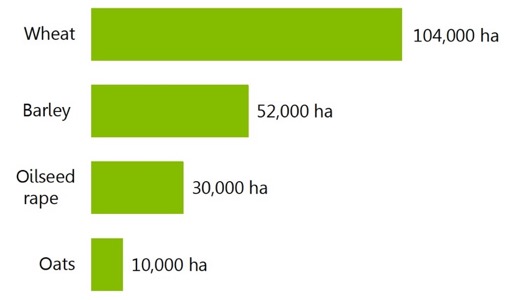 Crops planted in the autumn and grown over the winter period are known as winter planted crops. The area planted is heavily dependent on the weather, with the remaining area then generally planted in the spring.

Improved weather conditions led to an increase in the total amount of winter-planted crops in Scotland compared to the previous year and slightly above the ten year average. There were 197,000 hectares of land used to grow winter crops, two percent higher than the ten-year average of 192,000 hectares. This was a 13 per cent increase from 174,000 hectares last year. 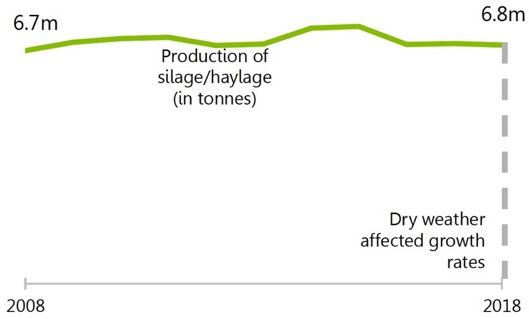 Dry summer weather resulted in an increase in hay production, but a slight drop in silage/haylage production. Overall production fell slightly by one per cent to 6.8 million tonnes over the past year. There was a 17 per cent increase in the area of grass sown. This drop has led to some farmers reporting a shortage of animal feed and increasing costs. Production in 2018 was slightly lower than the ten-year average. Hay and arable silage both saw increases in production over the past year. There was a large increase in the area of land cut for hay. 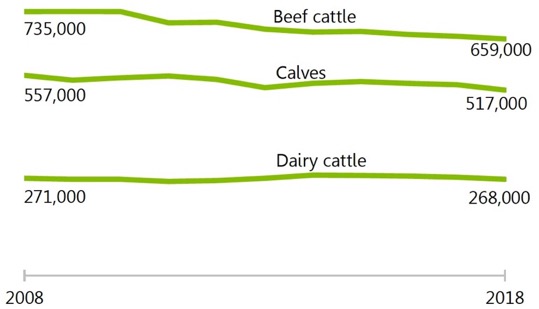 Number of cattle in Scotland in December 2018 1.66 million

Cattle numbers in Scotland continue to fall. In December 2018, there were 1.66 million cattle in Scotland. This is five percent lower than the ten-year average and a drop of two per cent on 1.69 million from the previous year.

Poor weather may have impacted cattle numbers over the past year. The long period of warm weather reduced the amount of grass grown for feed.

The shortage of feed during the warm summer has led to higher costs. Farmers may have slaughtered cattle earlier or in higher numbers to save on costs.

Sheep have lambs once per year, during springtime. The number of lambs on farms falls from spring to winter time as lambs are sold for slaughter. This means that lamb numbers are lower than reported in the June Agricultural Census.

Number of sheep in Scotland as at December 2018 4.95 million

Sheep numbers have remained steady despite challenging conditions. In December 2018, there were 4.95 million sheep in Scotland, an increase of one per cent on 2017. The total sheep numbers are one percent lower than the ten-year average.

Poor weather at lambing followed by a dry summer may have resulted in a delay in getting lambs up to weight for slaughter. The delay means a higher number of lambs are still on farm at the start of December.

Number of poultry in Scotland in December 2018: 14.7 million

Despite an increase in the number of poultry birds for meat production (six per cent over the past year) the number of egg-laying birds outnumbered them for the second consecutive year.

Agricultural rents increase over past year 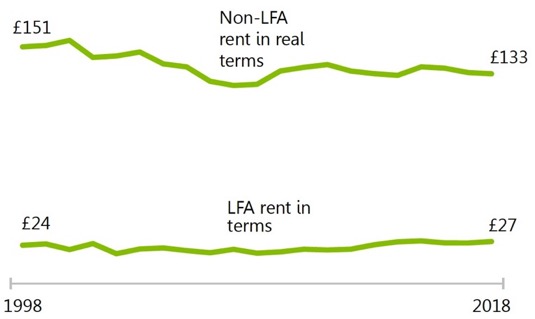 “Less Favoured Area” (LFA) is land which has a natural disadvantage that makes agricultural production difficult. Over 5.73 million hectares of Scottish farmland (85%) is LFA land.

A “real terms” value is a value that has been adjusted for inflation. Inflation is the rate of increase in prices for goods and services from one year to the next.

Average rent increased slightly to £40 per hectare. Better quality land has a higher rent and the average for non-LFA agricultural land was £133 per hectare in 2018. This is a one per cent fall from 2017. Rents for poorer quality LFA land increased by four per cent over the past year, rising from £26 per hectare to £27.

Farm types which can operate on LFA land, such as cattle and sheep farms, generally have smaller rents. Cereal farms which require good quality land generally have larger rents.

East of Scotland has the highest agricultural rents 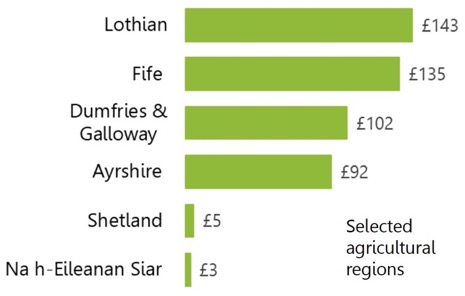 Median rents in Lothian £143 per ha

Median rents vary across the country. Rents in the North East and South East are generally higher. Lothian and Fife have the highest rents in Scotland due to their high quality land and central location.

Na h-Eileanan Siar and Shetland have the lowest rents, due to the poor quality land and remote location.

Ayrshire and Dumfries & Galloway have relatively higher rents considering the amount of less-favoured area land. These areas hold most of Scotland’s dairy herd which may be driving higher rents.

Information on machinery is only collected for larger farms. We collect data on categories of tractors by brake horse-power (bhp) ranging from under 35 bhp to 201 bhp or over.

In recent years it is likely that an increase in the use of contract farming has led to a decrease in the number of machines on farms, as a growing number of farms hire machinery and workers instead of purchasing their own.

Data source
This data is collected via an annual December Survey run by the Rural and Environmental Science & Analytical Services Division of the Scottish Government. The December Survey collects various data from agricultural holdings across Scotland. Sheep data are also collected during the annual sheep and goat inventory.

A full quality assurance and methodology report can be found accompanying this report.

Data tables
A full set of data tables for this publication is available online in the accompanying spreadsheet.

Crown Copyright
You may use or re-use this information (not including logos) free of charge in any format or medium, under the terms of the Open Government Licence. See: www.nationalarchives.gov.uk/doc/open-government-licence/

Comparisons
Similar surveys take place each year in England, Wales and Northern Ireland. Full results for the United Kingdom are available via the link below: