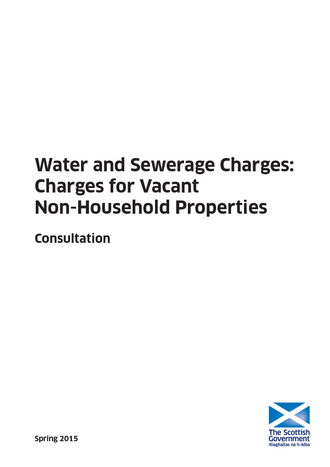 The Government proposes to introduce water, sewerage and drainage charges for vacant non-household properties. This will eliminate the cross-subsidy between occupied and vacant non-household properties and ensure that owners of vacant properties pay for the water and sewerage services provided. The additional revenue raised will benefit business customers by being used to restrict increases in the charges they pay.

The Final Determination published by the Water Industry Commission for Scotland on 20 November 2014 [2] set out a maximum level of charges offered to non-household customers for a particular level of service (the Default Tariffs). This has confirmed that a nominal freeze in the Default Tariffs is possible throughout the 2015-21 regulatory period provided the current exemption for vacant properties is removed in 2017.

The Government wishes to consult on the details of the removal of this exemption including the nature of the charges that should be introduced and the date upon which the current exemption should be removed. Should the exemption be retained or the removal delayed until later in the 2015-21 regulatory period, the additional cost will need to be recovered through increased non-household wholesale charges as determined by the Water Industry Commission for Scotland.

Question 1 - Do you agree, in principle, that vacant non-household properties should be charged for water, sewerage and drainage services?

The Government understands that properties can become vacant on either a temporary or permanent basis for a variety of reasons including change of occupant, refurbishment etc. On the basis that these premises remain connected to services, it proposes that no distinction should be made in the charging regime to recognise the cause or nature of the vacant status.

Question 2 - Do you agree that water and sewerage charges for vacant properties should be the same as those for occupied properties regardless of the reason for the vacant status?

Although a property is vacant, it has on-going drainage service needs and will require continued access to water and sewerage services for the new owner and/or occupier. For properties that are likely to remain vacant on a long-term basis, for example because it is no longer suitable for occupation, then arrangements should encourage the disconnection of services to minimise any risk to public health from these disused connections.

To reflect the continuous availability of water and sewerage services and to incentivise disconnection [3] , where appropriate, it is proposed that full charges - both standing and metered charges - should apply, thus removing the current cross-subsidy in its entirety.

Drainage charges reflect the costs of collecting and treating surface water from roofs, paved surfaces and public roads and are calculated according the Rateable Value of the property. Owners of vacant non-household properties do not currently pay drainage charges even though they are reliant on these services to ensure that surface water is removed from their property. It is proposed that owners of vacant properties should pay the full charge unless alternative treatment and discharge arrangements are made for the rainwater collected from roofs and car parks. Alternative arrangements should conform with current pollution control guidance ( http://www.sepa.org.uk/water/water_regulation.aspx) and may need to be agreed with SEPA.

Question 3 - Do you agree that drainage charges should be the same as those for occupied properties?

The additional revenue raised by the introduction of water, sewerage and drainage charges for vacant properties will be used to restrict increases in the charges payable by non-household customers. These measures are expected to raise some £15 million.

The costs incurred by the owner of a vacant property will vary according to the size of the water meter. For the smallest water meter size, the fixed (also known as standing) charge for water and sewerage services is some £300 per year. Drainage charges are additional and are calculated by reference to the Rateable Value of the property.

No primary or secondary legislation is required to implement the charging of vacant properties. The Water Services etc. (Scotland) Act 2005 already provides for the charging of all "eligible premises", that is, all non-household properties. Furthermore, occupiers and owners of properties will be required under the Water Resources (Scotland) Act 2013 to notify Licensed Water Suppliers of changes of occupier and occupancy status of a property. The introduction of charges, whether at full or partial rate, would help to ensure that owners and occupiers have a financial incentive to comply with the requirements of Section 33 of this Act.

The objective of this policy - charging of vacant non-household premises - is to deliver on the Government's stated commitment to cost reflective charging. The policy is not expected to have an Equality Impact.

Scottish Water's current six year charging period (also known as regulatory period) started on 1 April 2015. For this period, the Water Industry Commission for Scotland's Final Determination of wholesale charges has assumed, in line with the policy intentions set out by Ministers, that charges will be introduced for vacant premises on 1 April 2017.

Question 4 - Do you agree that the current exemption should be removed from 1 April 2017?