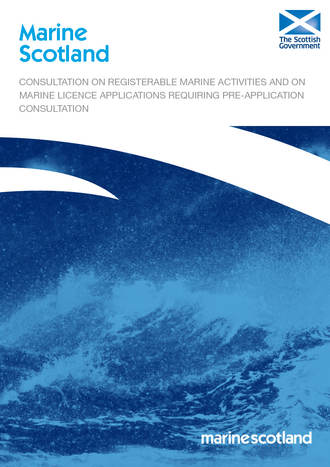 The new regime streamlines previous consents issued under the Food and Environment Protection Act 1985 1 , the Coast Protection Act 1949 and various other legislation which previously regulated marine activity in Scotland's seas, into a single 'marine licence'. The marine licence is issued by the Marine Scotland Licensing Operations Team ( MS LOT) who perform the role of a 'one stop shop' for all marine licences in Scotland's seas. These licences are either issued under the Marine (Scotland) Act 2010, which covers the zone from 0 - 12 nm, or the Marine and Coastal Access Act 2009, which covers the zone from 12 - 200 nm.

This consultation deals only with activity in the Scottish inshore zone from 0 - 12 nm, covered by the Marine (Scotland) Act 2010. The Marine and Coastal Access Act 2009 does not contain similar provision for the designation of registerable and pre-application consultation activities.

Section 21 of the Marine (Scotland) Act 2010 lists 'licensable marine activities' for which it is necessary to obtain a licence before carrying them out. These are activities that are considered to have the potential for adverse effects on the environment, human health or other legitimate uses of the sea. Licensable activities include (but are not limited to) the deposit of substances or objects from a vessel or marine structure, the construction, alteration or improvement of works, dredging and the deposit or use of explosives.

However, there are certain activities which are covered by this list but which nevertheless are exempt from the scheme where licensing is not appropriate or where the risk to the environment, human health or legitimate uses of the sea is so small as to be negligible. In such circumstances, the requirement for a marine licence is deemed unnecessary and these activities have been exempted from marine licensing under the Marine Licensing (Exempted Activities) (Scottish Inshore Region) Order 2011 (as amended). Such activities include most harbour maintenance dredging, fire fighting and the deposit of scientific instruments.

Registerable activities - their place in the licensing regime

There are a number of activities in Scotland's seas which are of low impact, but which currently require a licence to carry on. However, while the impact of these activities is low, it may not be appropriate to simply exempt them from the licensing regime.

It is proposed that a form of registration is introduced that would enable applicants to go ahead with their activity without having to go through the application process for a marine licence, yet enables Marine Scotland to maintain a record of the type, frequency and location of these activities.

Registration would apply to named activities which fall below a specified threshold of environmental impact. Once the activity had been reported to MS LOT, it could then go ahead without the need for a marine licence.

The introduction of registration would provide an extra tier in the regulation of marine activity and would allow a more flexible approach to licensing. It would allow MS LOT to reduce the regulatory burden on small scale developments and provide a more efficient, streamlined service.

Activities that will be subject to pre-application consultation

Section 22 of the Marine (Scotland) Act 2010 allows Scottish Ministers to prescribe certain applications for marine licensable activities as being subject to pre-application consultation. This approach will be particularly relevant for large marine developments such as wave and tidal projects or off-shore wind farms. Effective pre-application consultation will allow communities with concerns about such projects to become fully engaged in the decision making process at an early stage in the application process.

Consultation with communities and stakeholders will add to the quality of applications by allowing applicants the opportunity to amend their emerging proposals to accommodate community opinion. Discussions with MS LOT should then lead to a more refined application which can be processed in the most efficient manner.

The fishing industry has expressed particular interest in these proposals and it is hoped that the requirement for pre-application consultation will help tackle concerns over the displacement of fishing activity by large scale developments, especially renewable energy developments.

Regulations will be required to prescribe the classes or descriptions of licensable marine activities that should be registerable instead of licensable and for those activities that will be subject to pre-application consultation. This secondary legislation will be empowered by the Marine (Scotland) Act 2010.

The secondary legislation will be informed by this consultation and drafted once an analysis of responses has been made.

Current guidance on marine licensing, available from MS LOT (or on the Scottish Government website at http://www.scotland.gov.uk/Topics/marine/Licensing/marine) will be updated to reflect any changes brought about by the introduction of these proposals.

The Scottish Government is committed to consulting with all parties potentially affected by proposals for new legislation. Given the potential for these proposals to impact upon business or the third sector, Partial Business Regulatory Impact Assessments ( BRIA) have been prepared and are attached.

We would welcome comments on whether there are any costs and benefits that are not captured in the analysis; please provide supporting evidence.

Q1. What are your views on the overall costs and savings identified in the impact assessments?

4. REGISTRATION OF ACTIVITIES BELOW A SPECIFIED THRESHOLD OF ENVIRONMENTAL IMPACT
2. PURPOSE OF DOCUMENT