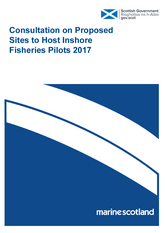 The Arbroath and Montrose Static Gear Association submitted a proposal for consideration that was aimed at protecting a locally-important creel fishery.

The proposal, as originally submitted, did not meet the criteria for inclusion in the consultation. However, after receiving further clarification on the details of the proposal, an interesting and innovative concept emerged which Marine Scotland believes warrants further investigation.

This concept involves the establishing of ‘zonal boxes’. These would be areas/zones of the sea where either static or mobile gear fishing activity would be permitted for a limited period of time, in reaction to local events.

For example, a seasonally-important squid fishery on the east coast can result in conflict between mobile and static gear fishermen (and similarly for vessels targeting scallops by dredge and creel fishermen in the area). This is due to the two sectors operating in the same area at the same time, but fishing for different species. It is envisaged that under the zonal box concept, access arrangements to portions of a particular area for each sector could be discussed and decided upon by fishermen through a local management group, for example a RIFG working group, and brought into effect. The restrictions would be time-limited and put in place as and where necessary.

Marine Scotland seeks views on selecting a location where the zonal box concept could be tested, either in the area of the sea identified by the Arbroath and Montrose Static Gear Association (see diagram below) or, indeed, elsewhere around the coast.

17. Do you support Marine Scotland exploring the concept of zonal boxes, where either static or mobile gear fishing activity would be permitted for a limited period of time?

18. Should this concept be explored in the Arbroath area as described?

19. Is there any other area of the coast you would recommend for exploring zonal arrangements?