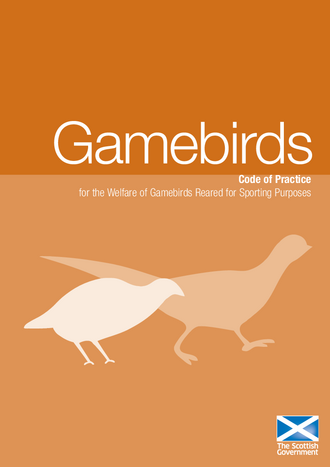 This does not represent an exhaustive list. The Law, as quoted, is that in force on the date of publication of the Code and, as amendments may be made to the law, the current legislation should be referred to and reviewed.

The Avian Influenza (Preventive Measures) (Scotland) Order 2007 - those keeping 50 birds or more must provide details of species of bird, husbandry system in which they are kept, the number of species usually kept, number with access to open air, details on seasonal stocking variations and nearby open water. Any changes in stocking rate by an increase or decrease of 20% or more require notification.

The Animal By-Products (Scotland) Regulations 2003 - require various records to be kept on the disposal of animal by-products such as fallen stock and hatchery waste. In addition game and hatchery waste in the form of surplus chicks, live unhatched chicks or embryos must be disposed of in accordance with the Welfare of Animals (Slaughter or Killing) Regulations 1995 and the Animal By-Products Regulation ( EC) No. 1774/2002. The code of practice issued by the Humane Slaughter Association also provides helpful guidance.

The Welfare of Animals (Transport) (Scotland) Regulations 2006 - See Council Regulation ( EC) No 1/2005 on the protection of animals during transport and related operations.

Guidance on the Transport Regulations

The Veterinary Medicines Regulations 2009 - require records to be kept on medicine usage, administration and disposal of unused medicines. Records must be kept for at least 5 years. Medicines and veterinary treatments must be stored and used in accordance with current legislation and codes of practice, and manufacturers' instructions should be followed. Records of all medicinal products must be maintained, and all withdrawal periods must be strictly adhered to so that any residues are eliminated.