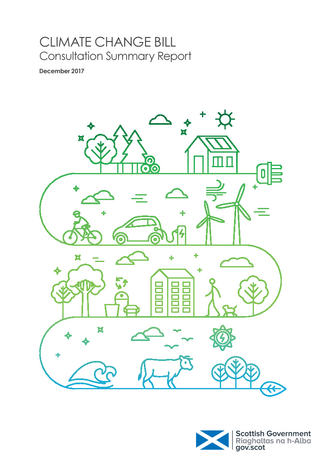 For brevity, most campaigns are referred to using their acronyms, which are given in Table 4 below.

7.1. General points made by campaigns

All the campaigns express a strong desire for urgent action from the Scottish Government to reduce GHG emissions, with most of the campaigns specifically referencing their desire to limit global temperature rises to a maximum of 1.5°C as specified in the Paris Agreement.

‘Please make sure the new Climate Change Act commits Scotland to doing its fair share to tackle climate change and limiting global temperature rises to 1.5 degrees C, so we can ensure a better future for Scotland and for people around the world.’ Christian Aid campaign

The FOE campaigns express a general disappointment regarding what they see as a lack of ambition in the Bill proposals by setting insufficient targets.

‘The proposed new 2020 target is the equivalent of the current 2020 goal under a new accounting system and the proposed 2030 figure is only the slightest of increases on the target already agreed by the Scottish Parliament last year.’ Friends of the Earth Scotland campaign

However, the FOE campaign does praise past progress on targets, commenting that the original 2020 target is likely to be delivered ahead of schedule.

7.2. Specific points made by campaigns

In addition to the points described above, the 11 sets of campaigns responses to the consultation all make a series of specific requests and comments regarding the proposals as well as some which are outside the scope of the Bill proposals. These requests and comments are summarised below. For clarity, Table 5 shows which of the campaigns make each of several main points, with further details on these and other points made by campaigns below.

The FOE Scotland campaign amended its campaign text following the publication of the Scottish Government’s Programme for Government in September 2017, while the consultation was still open. The amended text is referred to below as ‘ FOE Updated’. Because the campaign text is different to the original FOE campaign (set up in July 2017), it is considered separately in Table 5, but they are counted as a single campaign in all other respects.

All of the campaigns ask for the targets to reduce GHG emission to be higher and achieved sooner, as shown in Table 5.

‘Create a strong Scottish Climate Change Act and a prosperous, healthy Scotland by doing the following: Set a target of zero greenhouse gas emissions by 2050 at the latest, and a reduction of 77% by 2030.’ 38 Degrees campaign

Table 5: Specific points made in each campaign

* Please see below for full details

All the campaigns request that Scottish financial budgets are set in such a way as to support the ambitions in the Bill proposals.

‘Ensure that future finance budgets are consistent with our climate targets: The annual Scottish Budget must allocate funding in a way that is consistent with delivering the required greenhouse gas emissions reductions targets.’ World Wildlife Fund campaign

All the campaigns request that all homes in Scotland be brought up to an EPC rating of C by 2025. Some of them argue that this will not only reduce GHG emissions but create jobs and reduce fuel poverty.

‘Ensure that all homes have at least Energy Performance Rating C by 2025. Heating our homes and buildings is responsible for 50% of our climate emissions. Bringing all homes up to EPC C by 2025 would not only reduce our greenhouse gas emissions, but would help tackle fuel poverty and create jobs all across Scotland.’ Stop Climate Chaos Scotland campaign

All the campaigns request that a nitrogen budget be set by 2020. They argue that this would promote more efficient use of fertilisers, which in turn would support carbon emission reduction measures.

‘Set a nitrogen budget for Scotland by 2020 Farming is responsible for almost a quarter of Scotland's climate pollution, and lots of this comes from the manufacture and use of nitrogen-based fertilisers.’ Scottish Catholic International Aid Fund campaign

All the campaigns except ‘ FOE updated’ request that the sale of new fossil fuel cars be phased out by 2030. They argue that this will not only reduce GHG emissions, but would also clean up the air and consequently help improve the nation’s health.

‘Phase out the sale of new fossil fuel cars by 2030. Our emissions from transport have hardly gone down since 1990. Phasing out fossil fuel vehicles would reduce emissions, clean up air pollution and improve the nation's health.’ Oxfam campaign

Three of the campaigns comment that action taken to reduce climate change will result in positive outcomes for the people of Scotland, such as improved health and equality. Further details on the predicted positive impacts on people of reducing GHG emissions can be found in section 5.1.

‘Effective action to tackle climate change will help build a fairer and more equal Scotland, improve people’s daily lives and drive the transition to a low-carbon economy.’ Friends of the Earth Scotland campaign

Three of the campaigns request that the government set up a ‘Just Transition Commission’, made up of groups which would advise the government on how to transition to a low-carbon economy. Further details of this suggestion and others related to transitioning the economy can be found in section 5.2.

‘Establish a Just Transition Commission that includes union, community and environmental representatives, to advise the government on the transition from high-carbon industries and jobs to a low-carbon economy.’ Global Justice Now campaign

Appendix A: List of consultation documents
Chapter 6: Other issues regarding the new Climate Change Bill