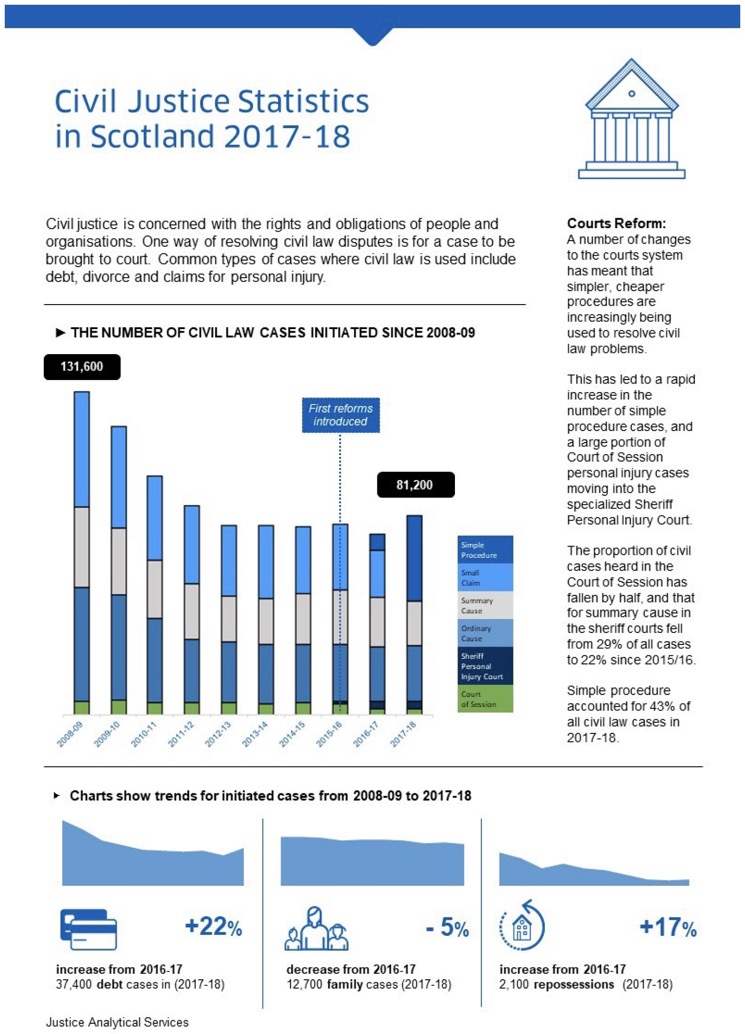 Civil justice is concerned with the rights and obligations of people and organisations. One way of resolving civil law disputes is for a case to be brought to court. Common types of cases where civil law is used include debt, divorce and claims for personal injury.

A number of changes to the courts system has meant that simpler, cheaper procedures are increasingly being used to resolve civil law problems.

This has led to a rapid increase in the number of simple procedure cases, and a large portion of Court of Session personal injury cases moving into the specialized Sheriff Personal Injury Court.

The proportion of civil cases heard in the Court of Session has fallen by half, and that for summary cause in the sheriff courts fell from 29% of all cases to 22% since 2015/16.

There were 81,200 civil law cases initiated across the Court of Session and sheriff courts in 2017-18 (excluding summary applications[1]). This represents an increase of 10% from 2016-17, and is only the second increase in court business levels over the last ten years.

This change has occurred in the context of far-reaching reforms to the conduct of court business. These reforms are intended to make the resolution of civil disputes simpler and cheaper.

In general, civil justice problems being dealt with in sheriff courts by simpler procedures means that the time and costs associated with resolving these problems are reduced.

The types of civil justice problems encountered by people in Scotland and resolved in the courts has not changed much over the past ten years. Debt actions remain the most common, constituting 46% of primary craves. Eviction and Family actions were second and third most common, at 18% and 16% respectively.

In the context of rising levels of business overall, most case types have increased in parallel. The largest increases were recorded for Debt (+22%), Repossession (+17%) and Personal Injury (+13%). However, family cases have decreased by 5%. Three quarters of family type cases had divorce as the primary crave.

All sheriffdoms in Scotland experienced an increase in business levels from 2016-17. Between 2016-17 and 2017-18, Tayside, Central and Fife saw the largest increase in initiated cases (15%), while Grampian, Highlands and Islands saw the smallest (4%).

The 2017-18 Scottish Crime and Justice Survey shows that nearly three in ten adults were estimated to have experienced at least one civil law problem during the previous three years. The most common type of issues were disputes with neighbours (15%), followed by problems with faulty goods or services (5%), and money and debt issues (4%).

Figure 1: Long term downward trend in initiated cases, but a rise in the latest year 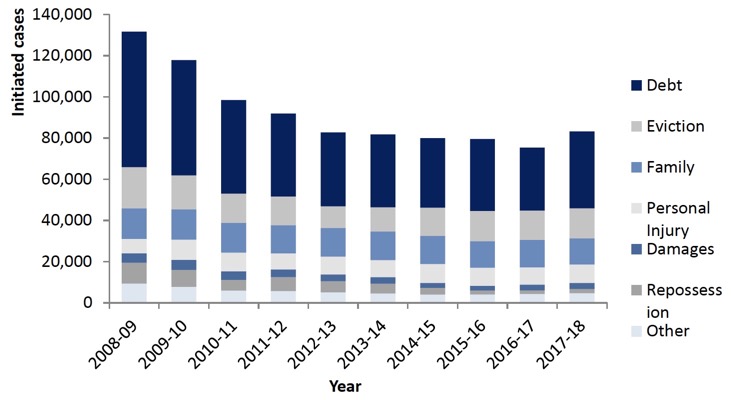