3. Quality of the statistics

The large variety of case types and procedural outcomes that can be pursued in civil law mean that recording and reporting civil law court cases accurately and reliably is a challenge. The Scottish Government and the Scottish Courts and Tribunals Service (SCTS) have invested time over several years to identify key case data and how best to capture and record it.

The publication of civil law court statistics was suspended after Civil Judicial Statistics Scotland 2002 because of a lack of precision in the definition of data items, which caused inconsistencies in the way courts captured and recorded civil data. The statistics published until then were deemed unreliable and potentially misleading. Extensive work has since been conducted to identify and rectify instances of inconsistent recording of data. Following improvements to data quality, publication of civil law statistics resumed in 2008-09. Users of civil law statistics were consulted to identify which data is most useful to them.

To assist with the on-going improvement of civil law statistics, a dedicated ScotStat group has been created. The objectives of this group are to:

The group has membership across the civil law community and normally meets once or twice a year. If you are interested in joining the group, please contact us using the details provided at the end of this document. Links to the civil justice group are available within the ScotStat web pages.

The statistics produced since 2008-09 have been assessed by the Scottish Government as being of sufficient quality to be published as Official Statistics. However, when using the statistics, the following points should be considered.

Because of how the data is recorded, if a case is appealed or reclaimed during the same month that it was disposed of, then the original disposal will not be counted. However, as there are very few appeals and reclaiming motions each month, this is not expected to have a significant impact on the statistics.

The civil justice statistics for 2017-18 can be compared with statistics for 2008-09 onwards. Due to inconsistencies in the data prior to April 2008 and changes in recording methods and definitions, the current series of statistics should not be directly compared with earlier data, which may be shown in this bulletin for illustrative purposes only.

Prior to the introduction of iCMS for Sheriff Court cases in October 2016, the number of ordinary cause cases disposed of were underestimated. Analysis of data suspected to be inaccurate and collected between April 2008 and February 2010 found that about a fifth of the active ordinary cause cases may have been disposed of but were not marked as such in the electronic case management system. However, it could not be determined conclusively whether all the excess cases were in fact disposed of, as the analysed data was not representative of all data collected by the SCTS. The number of ordinary cases marked incorrectly is hence likely to be smaller than a fifth.

A number of cases initiated do not proceed beyond having the initial writ or summons registered with the court. These cases cannot be classed as disposed of as they can be resumed under certain circumstances. The analysis found that up to around a tenth of the ordinary cause cases studied had no further action after initiation.

A number of cases are sisted (suspended), either for a defined period or until the occurrence of a particular event. Again, these cases are not disposed of as they may be resumed in the future but the SCTS has investigated whether cases which have been sisted can be identified within the statistics. The analysis found that around a fifth of the ordinary cause cases studied were currently sisted.

Since iCMS went live, disposals data is captured using the date of decree which is more reliable than disposal markings. Analysis will be carried out in due course to determine the level of accuracy in this methodology.

The number of cases disposed of by the sheriff courts as recorded under the CMS system is very likely to be an underestimate, but the extent of the undercount is not known and it would be either too resource-intensive or, for some case types, impossible to estimate. Further work will be carried out by the SCTS to determine if this problem still prevails with the iCMS system.

Personal injury cases within the Court of Session are raised under a specific court procedure. However, either party can request permission from the court to opt out of this procedure and use the standard ordinary procedure. When this happens, cases are transferred out and re-registered under the ordinary procedure where they are eventually disposed of.

The divorce and dissolution statistics presented in Table 9 and Table 10 are derived from a different data source to the other statistics in this bulletin. Both data sources are based on information recorded by the SCTS but there are differences in the timing and processing of the two extracts.

These differences are small, as demonstrated by the comparison in Figure 15 of the total number of divorces and dissolutions from each source. The statistics in Table 9 and Table 10 and the Divorces & Dissolutions Supplementary Tables are based on individual records that are updated on an on-going basis. The detail contained in this data enables the breakdown of cases granted by grounds, age, duration, marital status, method of celebration and gender. Note that at the time of publication, we do not have the complete data set to enable us to produce the divorces and dissolutions supplementary tables.

Figure 15: Total number of divorces and dissolutions from individual-level and aggregate data 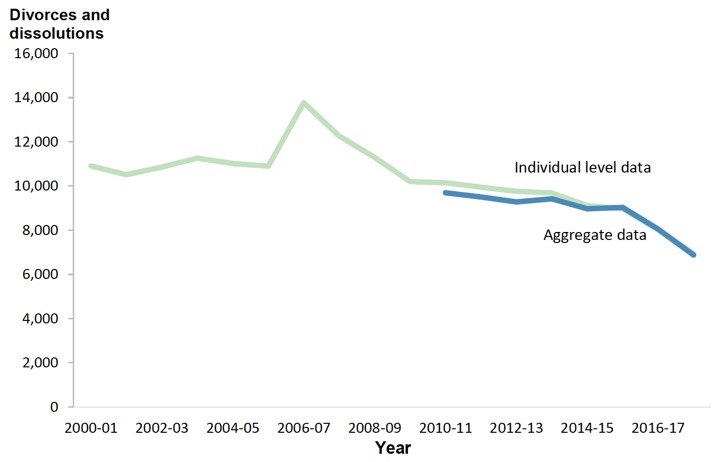