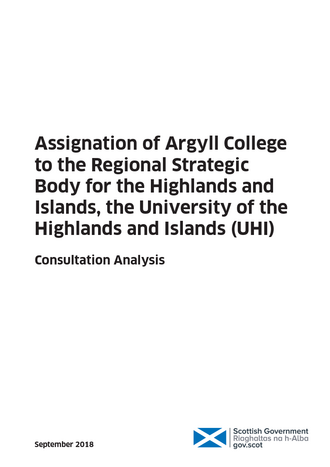 3. The consultation consisted of 3 questions, 1 of which was a closed question. The Scottish Government received 7 responses to the consultation. All respondents identified themselves as organisations. A full list of respondents is in Annex 1.

4. The majority of responses were from colleges. Other respondents included Unions and the Office of the Scottish Charity Regulator.

5. 100% of the respondents supported the proposal to assign Argyll College to the University of Highlands and Islands.

6. The Regional Strategic Body strongly supports the plans and that it is long overdue.

7. Argyll College hopes to grow their student numbers at both FE and HE levels, believing there is scope for modest but sustained growth from many parts of Argyll and Bute and Arran. As part of this growth the college do not wish to see student numbers constrained with the other UHI partners but believe we should be addressing historic trends which has seen students from Argyll leaving the area.

8. The structure of the region continues to be federal in nature with shared services and decision making being out-sourced and distributed amongst the partner colleges and institutions. Argyll College observes that there is a need to retain focus on successes and weaknesses of individual partners rather than seeing Regional statistics masking good or bad outcomes.

9. North Highland College ( NHC) believe the close working relationship between Argyll College and NHC staff should and will continue in the future regardless of any changes in governance through assignation to UHI. NHC are confident that Argyll is in a good position to take full responsibility for the quality of its own provision after devolving many aspects of quality management over a number of years.

11. Based on this, West Highland College hold themselves ready for closer operational and strategic collaboration in future, willing to examine any strategic options that may arise in this context.

12. EIS-FELA expressed that non incorporated colleges are not public bodies and do not have the same level of accountability enshrined in statute as incorporated bodies. This does not provide the security of regulatory provision which would appear to have been envisaged by Scottish Ministers at the time of reclassification.

13. The EIS-FELA believes that the delivery of FE in the Highlands and Islands region deserves the same level of public accountability, security and Parliamentary oversight as is applicable to the incorporated bodies throughout the rest of Scotland. It sees no reason why only Highlands and Islands students and staff should have FE provision delivered by private companies limited by guarantee whilst other regions have incorporated bodies which are wholly and directly accountable to Scottish Ministers.

14. Whilst a number of teaching staff at Argyll college are EIS members, at present there is no formal Recognition and Procedures Agreement ( RPA) at a local level, or do any staff receive remission for trade union facility time.

15. Argyll College is not a signatory to the National Recognition and Procedure Agreement ( NRPA) and is current only 'shadowing' the agreements of the National Joint Negotiation Committee ( NJNC).

16. EIS-FELA has concerns about how these shadowing arrangements are being implemented in practice in absence of a formal recognition agreement, particularly with regard to the lack of local engagement on changes to terms and conditions. In moving to assigned status, EIS-FELA believes that Argyll college should become a signatory of the NRPA and engage fully with the national bargaining process.

17. EIS-FELA states that effective management should include investment in staff. If the qualitative standards of teaching and learning are to be maintained then staff must have security of employment and time to engage in professional development and dialogue.