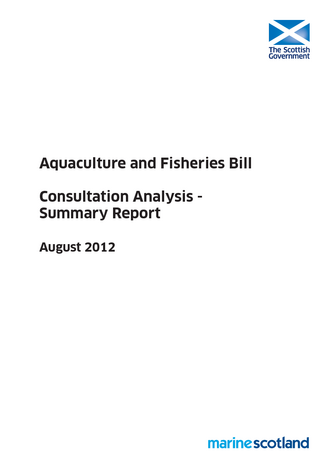 Question 37. Do you agree that strict liability criteria should apply - where they capable of being applied - for offences related to Marine Licensing requirements insofar as they apply to aquaculture operations and, potentially, in other situations?

8.2 Several respondents suggested circumstances where the proposal could be usefully applied, e.g. escapes of farmed fish from aquaculture facilities.

8.3 There were, however, strong views from opponents that this proposal was disproportionate to the perceived problem, may be unfair and ineffective, and could have damaging impacts on the aquaculture industry. They also questioned the need for this measure.

8.4 One respondent requested further information on statutory defences that may also be introduced by the Bill.

Question 38. Do you agree that we should extend the use of fixed financial penalties as alternatives to prosecution in relation to marine, aquaculture and other regulatory issues for which Marine Scotland has responsibility?

8.5 Less than half of consultees answered this question, and there were mixed views on the use of fixed penalties amongst those that did answer.

8.6 Some of those in favour of the proposal felt that it could be widened beyond the aquaculture industry and suggested public disclosure of offences.

8.7 Some expressed concerns about this becoming a normal business cost or a means of reducing the administrative burden.

8.8 There was strong opposition from the aquaculture industry to the proposal. These respondents felt that it would be disproportionate and also questioned the evidence base to justify it.

Question 39. Do you agree that we should increase the maximum sum that can be levied through a fixed penalty notice to £10,000?

8.9 Less than half of the consultees answered this question. There were mixed views on increasing the maximum sum for fixed penalty notices amongst those who did respond.

8.10 Aquaculture and marine fisheries industry respondents were strongly opposed, questioning what evidence there was to support the proposal. Several respondents considered that the maximum limit would be disproportionate to any non-compliance, and felt that a modern risk-assessed regulatory approach is needed.

8.11 There was a range of views on the penalty value, with some supporting a higher figure, and others questioning the potential impact of the proposed amount on smaller businesses. A proportionate approach was again suggested.

Question 40. Are there particular regulatory areas that merit a higher or lower maximum sum?

8.12 Over half of respondents elected not to answer this question.

8.13 There was no consensus amongst respondents on whether there was a case for higher fixed penalty sums in certain regulatory circumstances. Many referred to their responses to Question 39.

8.14 Several consultees suggested circumstances where higher penalties could be merited, including those relating to environmentally sensitive areas, escapes and persistent breaches of regulations.

8.15 Those who responded to this question (around a third of all respondents) largely supported the proposed amendment.

8.16 Some felt that this would bring Scottish provisions into line with the requirements of the Marine and Coastal Access Act 2009 in England and Wales.

8.17 Some respondents suggested that the Fisheries Act 1981 could be further amended to place an emphasis on an ecosystem-based approach to sustainable fisheries management in some sections.

Question 42. Do you agree that sea fisheries enforcement officers should be given specific power to allow vessels to be detained in port for the purposes of court proceedings?

8.18 While almost two-thirds of consultees declined to answer this question, there was strong support for the proposal from those who did.

8.19 While few additional comments were received on this proposal, support for it was based on the closure of a loophole for foreign vessels, and bringing powers into line with those in England and Wales.

8.20 One respondent felt that it was imperative that enforcement officers are given sufficient resources for this.

8.21 One respondent who opposed the proposal stated that vessels should be allowed to return to sea.

Question 43. Do you agree that sea fisheries enforcement officers should be able to dispose of property seized as evidence when it is no longer required, or forfeit items which would be illegal to use?

8.22 While almost two-thirds of consultees declined to answer this question, there was strong support for the proposal from those who did. The marine fisheries sector was the only group with mixed views.

8.23 Several respondents felt that there should be regulation of gill netting, that illegal netting should be targeted, and that it should be illegal to sell equipment that is not legal in the UK (specifically monofilament gill nets).

Question 44. Do you agree that sea fisheries enforcement officers should have the powers to inspect object in the sea and elsewhere that are not obviously associated with a vessel, vehicle or relevant premises?

8.24 While almost two-thirds of consultees declined to answer this question, there was strong support for the proposal from those who did.

8.25 A respondent discussed procedures for undertaking these inspections, requesting that officers have reasonable cause for an inspection and that those parties responsible be given an opportunity to be involved.

Question 45. Do you have any views on the proposals to amend the Sea Fisheries (Shellfish) Act 1967 to help make its application clearer?

8.26 While over two-thirds of respondents declined to answer this question, there was general support across most stakeholder groups who did respond. The marine fisheries sector were largely opposed.

8.27 One shellfish industry respondent felt that the Act was sufficiently defined and opposed any amendment on the grounds that it would incur unnecessary costs.

8.28 Some respondents felt that the Act should be made 'fit for purpose', with several suggesting the definition of shellfish be made consistent across regulatory regimes, and that any amendments should support regulating orders to implement regional management systems within inshore waters.