Contents
Together we can, together we will: analysis of consultation responses
2. Rural Economic Strategy 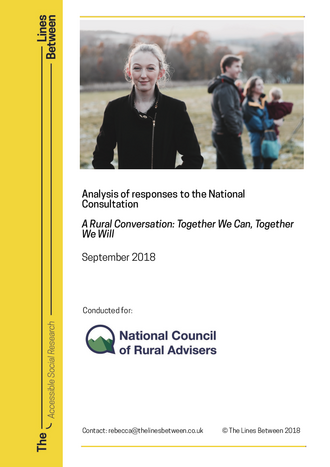 2.1 In the consultation document the NCRA highlighted its clear goal to create an ambitious Rural Economic Strategy. To support the shaping of the strategy, the NCRA asked questions about how policy makers in Government should make sure that the economic needs of rural Scotland are taken into account.

The findings in this chapter are largely drawn from analysis of responses to the following consultation question:

Question 1: The development of relevant Scottish Government mainstream policies should consider the effect upon the Rural Economic Strategy and its consequent policies.

2.2 The majority of respondents (102 out of 130) answered the question “Should there be an ability to call to account Scottish Government and their Agencies to ensure collaboration and actions to meet the objectives of the Rural Economic Strategy?”. Of these, most answered yes (90%), a minority (3%) said no, and 7% said they don’t know.

2.3 Most respondents identified a need for accountability when implementing the strategy and many went on to describe how they felt this could be achieved, expressing a demand for leadership, greater scrutiny, measurement and allocation of responsibility (see Appendix 1 for more detail). Some identified priorities for the Rural Economic Strategy, however a few questioned the approach. There were several suggestions about ways to ensure the Strategy accurately reflects rural needs, with an emphasis on consultation and some creative ideas about changes to policy development processes.

Illustrative international examples that the NCRA were asked to take note of:

There is a real need to call to account Scottish Government and their agencies to ensure collaboration and actions to meet the objectives of the Rural Economic Strategy.
Association of Scotland’s Self-Caterers

By allocating actions from the Rural Economic Strategy to public agencies and the private sector, lead organisations can be called upon to outline outcomes and impact as well as any differences in targets reached.
East Lothian Council

It is to be expected that the development of any national strategy would be a collaborative and consultative process between central government, local authorities, community planning partners, other key agencies, and so on. That is a minimum requirement and necessity in terms of developing a Rural Economic Strategy which meets the disparate needs of regional and islands' economies.
Outer Hebrides Community Planning Partnership

Many people in rural areas operate more than one unregistered micro business, frequently tourism-related… growing the numbers of businesses across a variety of sectors should be a strategic priority for the rural economic strategy.
Federation of Small Businesses

Addressing the challenge of retaining and attracting young people and young families to rural Scotland should be a high priority for the Rural Economic Strategy.
BT