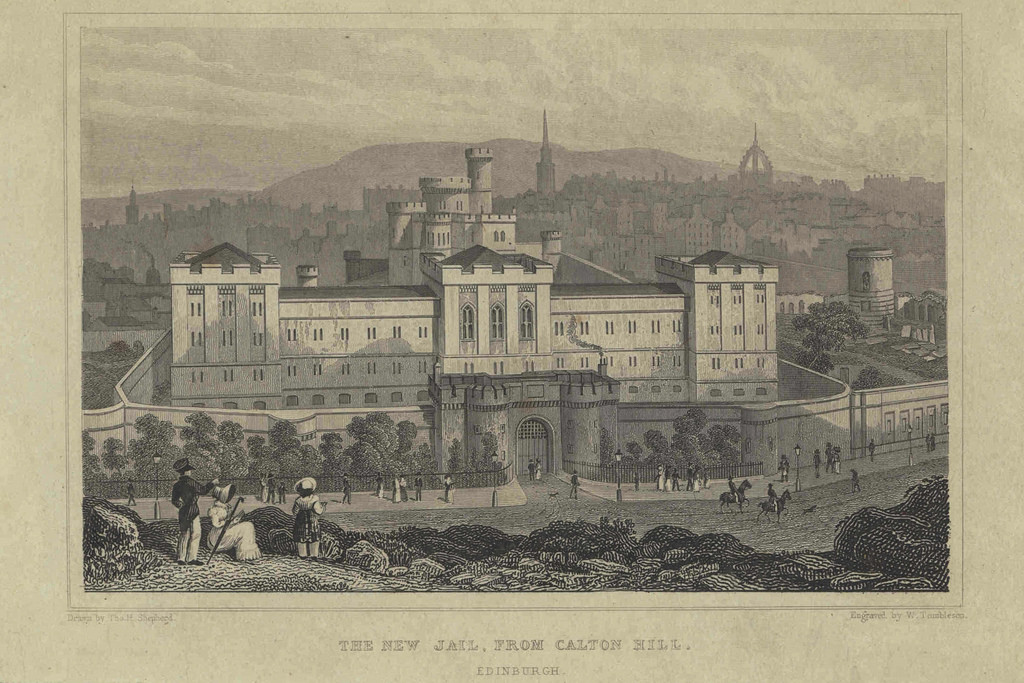 The site of St Andrew's House has a history as gruesome as any in Edinburgh.

Calton Jail was also the setting for executions, which often attracted crowds outside.

Calton opened in 1817, built on the site of other prisons. Why a jail of all things was chosen for this site vexed many including Lord Cockburn who remarked:

'It had been a piece of undoubted bad taste to give so glorious an eminence to a prison.'

Jules Verne who visited Edinburgh in 1859 described the jail as resembling a small-scale version of a medieval town.

The inmates' perspective was less prosaic. Willie Gallacher, imprisoned in Calton for sedition during World War One, wrote:

'It was by far the worst prison in Scotland; cold, silent and repellent. Its discipline was extremely harsh, and the diet atrocious.

His fellow anti-war inmates included James Maxton and Arthur Woodburn who described it as 'the poorhouse of all prisons with the cold chill of a grim fortress.

Few then grieved when demolition work started in 1930, by which time prisoners had been moved to Saughton. Ironically, Woodburn was to come back in 1947 as Secretary of State and, in a wry twist, used some of the old paving stones from the jail to lay a garden path at his house.

Most of the rubble was reused to build the Hopes Reservoir Dam in the Lammermuir Hills. The door to the Death Cell can be found in the Beehive Inn in the Grassmarket.

The cells survived for some years as part of the basement of St Andrew's House.

The only other remnants are Governor's House and some of the original jail walls.

The bodies of ten convicted murderers were buried on the site after execution and remain there - underneath the concrete of the west car park of St Andrew's House. They include:

Eugene Marie Chantrelle hanged on May 31 1878, for murdering his wife by gas poisoning

Jessie King, was the last woman to be hanged in Edinburgh - on March 11 1889. She was a 'baby farmer' who cared for unwanted children but murdered several of them

Patrick Higgins, a labourer from Linlithgow who murdered his two sons and threw them into a quarry, October 2 1913

John Henry Savage who had quarrelled with a woman in a house in Bridge Street, Leith and cut her throat, June 11 1923

Philip Murray was the last person to face the hangman's drop on October 30 1923. Arriving home in Jamaica Street, he found a man in his wife's bedroom and pushed him through a top floor window to his death.