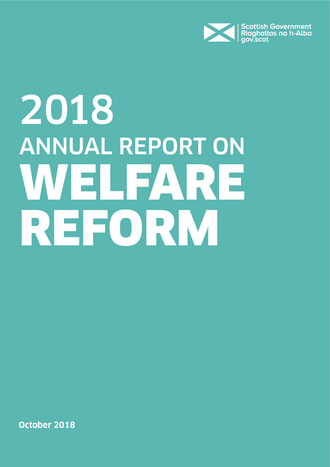 The Welfare Reform Act 2012 was enacted by the UK Parliament on 8 March 2012. [35] The Department for Work and Pensions ( DWP) stated that these reforms were aiming to:

Scottish Ministers were required to introduce regulations to enable devolved legislation to take account of these changes. Amongst other provisions, the Welfare Reform (Further Provision) (Scotland) Act 2012 required Scottish Ministers to report annually until 2017 to the Scottish Parliament on the impact of the Act on the people of Scotland.

2.2 Purpose of the report

Although this report is no longer a statutory requirement, the impacts of welfare reforms made by successive UK governments continue to affect the living standards of Scottish households. This report brings together important new evidence on how the social security system, and people’s experience of it, is changing.

2.3 Key features of the report

The first chapter of this report discusses the key changes in UK Government policy since the publication of the previous report in June 2017 and provides a focused update on welfare reform. It includes updated evidence about four notable welfare reforms: the Benefit Cap, the Two Child Limit ( 2CL), Personal Independence Payment ( PIP) and Employment and Support Allowance ( ESA). The report then looks at the scale and composition of the welfare spending reductions imposed by UK governments since 2010. With this context, it then discusses the effect these will have on child poverty, particularly for the priority groups identified in the Scottish Government’s Child Poverty Delivery Plan, and the action taken by the Scottish Government to mitigate the impacts of welfare reform.

The second chapter of this report provides a detailed update of Universal Credit ( UC), how people experience it, how claims are calculated and how it is different from the benefits system that it replaces. In the last year, a variety of new evidence has become available on how moving onto UC from the legacy system can negatively affect claimants. Despite concerns raised by the Scottish Government, the National Audit Office, third sector and other civic organisations, the DWP have confirmed that it intends to continue with the UC roll out. It now appears inevitable that almost all working-age benefit claimants will eventually be affected.

3. How is the social security system changing?
1. Executive Summary