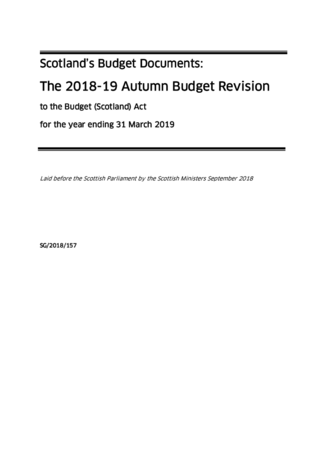 1. This booklet provides information for the Parliament and others in support of the 'Budget (Scotland) Act 2018 (Amendment) Regulations 2018' – the Autumn Budget Revision. The Order is a Scottish Statutory Instrument laid before the Scottish Parliament by the Scottish Government in September 2018. The booklet itself has no statutory force – it is produced as an aid to understanding the Order.

2. The purpose of the Autumn Budget Revision is to amend the Budget (Scotland) Act 2018, which authorises the Scottish Government's spending plans for the financial year 2018-19.

3. The main changes to the Scottish Government's spending plans, as set out in the supporting document to the Budget Bill, are explained below:

i) funding changes to reflect deployment of available resources to portfolios (total net increase to the budget of £32.1 million);
ii) technical adjustments mainly in respect of removal of borrowing from budgets (net decrease to the budget of -£31.2 million);
iii) Whitehall Transfers and HM Treasury allocations to the Scottish Government (£6.5 million); and
iv) the transfer of resources between Scottish Government portfolios (-£0.1m due to roundings).

4. The purpose of the Autumn Budget Revision is to seek Parliamentary approval for these changes.

5. The First Minister announced on 26 June 2018 the restructuring of the Scottish administration. The budgets shown in this document reflect the new portfolio structure. Table 1.1 provides a reconciliation between the former Scottish Government portfolios and the new Scottish Government structure. This provides an explicit link with table 1.4 of the Supporting Document to the 2018-19 Budget Bill.

6. Three changes have been made in this Revision, the first is to allocate £27m to various portfolios and bodies in respect of the allocation of EU Exit consequentials, the second is to allocate £4m to the Education & Skills portfolio for Raising Attainment and a final transfer of £1.1m is allocated to the Scottish Futures Trust for Scotland's Schools for the Future programme, giving net additional funding of £32.1m.

7. How we manage the interest and repayments on Scottish Government borrowing is set out in legislation. Section 66 of Scotland Act 1998 (as amended through SA 2012 and SA 2016) enables Scottish Ministers to borrow from the Secretary of State. Subsection 66(2) explicitly states that amounts required for the repayment of principal and payment of interest on sums borrowed under this section are to be charged on the Scottish Consolidated Fund. This means that they are a prior call on the funding before the drawdown to fund Scottish Government expenditure set out in the Budget Act, as authorised by the Scottish Parliament. This budget should therefore be removed from Scottish Budgets and administered centrally. The application of these funds will be reported through the Consolidated Fund Accounts and the Budget supporting document will show the detail of the centrally managed budget for this going forward. The build-up of annual payments and associated ageing of the debt stock will also be published each year in the Scottish Government's annual accounts. We recognise this is a notable change in the way the budget for borrowing costs is presented and will ensure that documentation transparently reports this budget going forward (-£31m). In addition a minor adjustment has been made to allow the Risk Management Authority to access cash reserves (£-0.2m).

8. There are four minor Whitehall Transfers recognised as part of the Autumn Budget Revision. Consequentials of £4.8 million from HM Treasury in respect of Research and Development passed onto the Scottish Funding Council and a £0.1m transfer from HM Treasury for the Edinburgh Cultural Summit.

10. The Scottish Government continues to discuss with the Finance and Constitution Committee and others how it can improve the presentation and usefulness of supporting information.

11. The summary tables on pages 4 to 10 set out the changes sought in the Order at portfolio level, and the effect of the proposed changes on the overall cash authorisations. There is a clear read across from the numbers shown on the face of the Budget Act to those in these tables, and to the revised numbers shown in the Autumn Budget Revision Order itself. Tables 1.6 and 1.7 provide a reconciliation between the resource budgets and the cash authorisations. Tables 1.8 (a) and (b) show the sources of funding that support the changes applied and the movement of available resources. Table 1.9 shows the voted Capital Spending and Net Investment for each portfolio following the ABR adjustments. It should be noted that for the remainder of the document, only spending that scores as capital in the Scottish Government's or Direct Funded Bodies' annual accounts is shown as capital.

12. The main body of the document then provides a more detailed analysis of the proposed changes on a portfolio by portfolio basis. For each portfolio and direct-funded body, it shows:

13. The Scottish Government's spending proposals are in the main presented to Parliament in resource terms. But to meet the requirements of the "Public Finance and Accountability (Scotland) Act 2000", Budget Bills and Revisions seek authority for the budgets of NDPBs in cash, and NDPB numbers in this supporting document are also given in cash terms. In order to allow comparison with NDPB budgets presented in other Scottish Government publications, the following table compares cash and resource budgets.

Table A – Revised NDPB Cash and Resource Budgets by Portfolio, 2018-19

Process for the Budget Revision

14. Following detailed consideration by the Subordinate Legislation and Finance Committees, the Scottish Parliament has an opportunity to vote on the Autumn Budget Revision order subject to a recommendation by the Finance and Constitution Committee.