Scotland has some of the most beautiful and diverse marine ecosystems in the world. Marine Scotland is committed to protecting and enhancing these amazing ecosystems to ensure they are safeguarded for future generations to enjoy. Protected areas are used to ensure protection of some of the most vulnerable species and habitats. 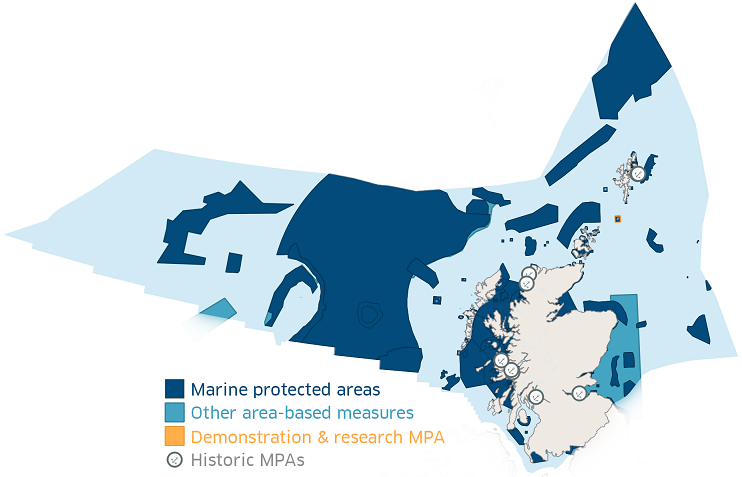 The Scottish MPA network includes sites for nature conservation, protection of biodiversity, demonstrating sustainable management, and protecting our heritage. In total the network covers approximately 37% of our seas and comprises:

In December 2018 Scottish Ministers laid a report in the Scottish Parliament describing progress with implementing the MPA network. 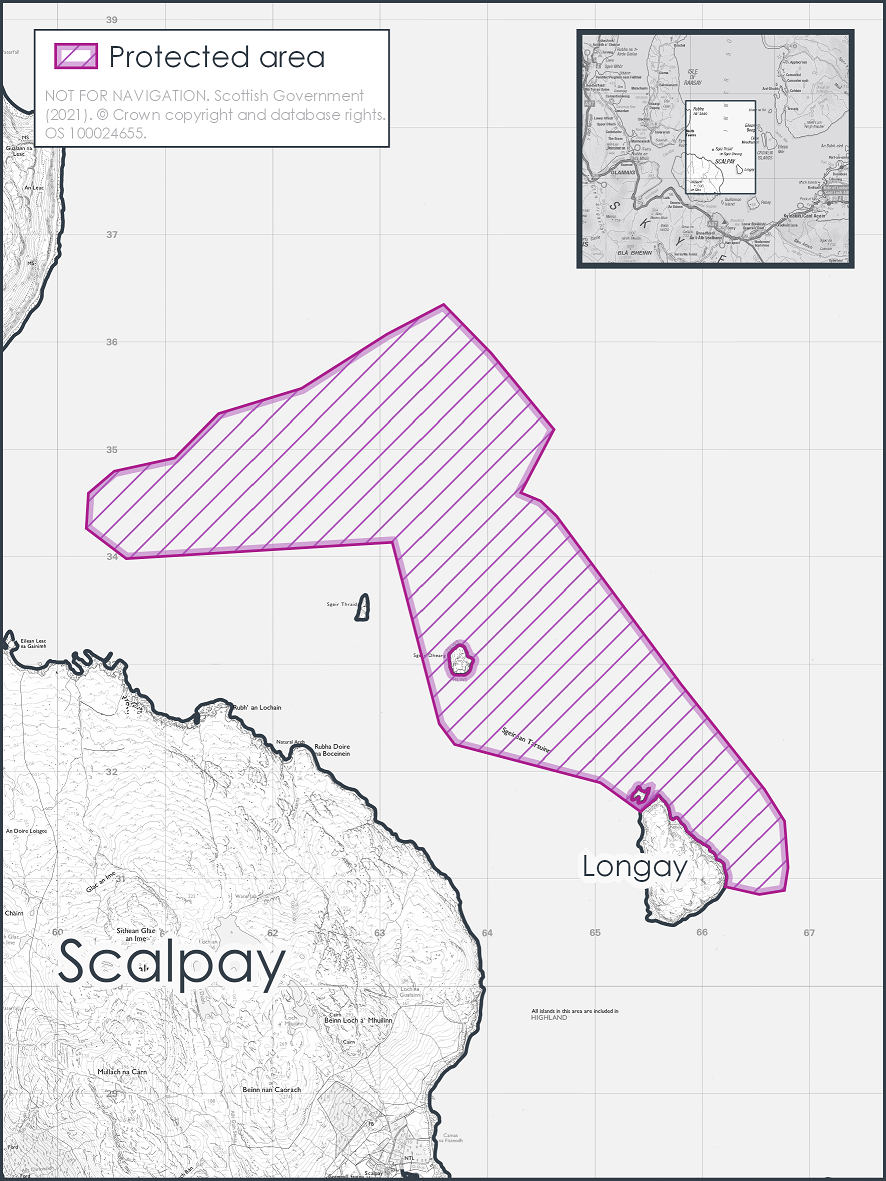 The Scottish Government was initially notified of the presence of flapper skate eggs in the Inner Sound of Skye in late 2019 and have awaited scientific advice from NatureScot on this matter. We received this advice in October 2020 following additional surveys, and protection of the site has since been considered as a priority. We have sought to fully understand the national context and potential threats to the nursery area, as well as views of key stakeholders.

Further engagement was undertaken with key stakeholders in November and December 2021 on extending the MPA. This has enabled us to develop an urgent MPA to provide appropriate interim protection for this flapper skate nursery area.

Flapper skate (Dipturus intermedius) are a critically endangered species. They were historically abundant in the North-east Atlantic and widely distributed in the seas surrounding the British Isles, however its range has reduced significantly and catch rates declined throughout the 20th century. The flapper skate now only occurs in the northern North Sea and off Scotland’s north-west coast.

Little is known about flapper skate breeding grounds and breeding habits due to their rarity. Their eggs take around 18 months to hatch and are sensitive to disturbance from a number of marine activities during that time.

The MPA was developed using advice from NatureScot to understand the conservation requirements of the flapper skate eggs, and input from stakeholders to understand areas of economic importance and views about the extent of the site boundary. The final boundary was felt to provide an optimal balance between protecting the known skate egg records and minimising adverse impacts arising from the site designation.

Social and economic assessments are not required for urgently designated Marine Protected Areas. Due to the need for urgent protection, social and economic impacts have not been fully assessed for the temporary designation. Scottish Government officials discussed proposals with impacted stakeholders in order to minimise adverse socioeconomic impacts arising from the urgent MPA, whilst supporting the conservation of this critically endangered species.

Following surveys to gather evidence for the permanent site, a significant number of flapper skate eggs have been discovered north of the original site. Scottish Ministers determined there was a need to urgently include this egg laying habitat in the protection given by the MPA by extending the Red Rocks and Longay MPA in the interim. Scottish Ministers revoked the original site and urgently re-designated the extended site which came into force on the 16 December 2021.

Why we need to do this

There has been no damage to this site that we know of, however NatureScot have advised that flapper skate eggs are highly sensitive to disturbance and as a nationally important site, these should be protected urgently. An MPA can designated under section 77 of the Marine (Scotland) Act when Ministers consider there to be an urgent need to do so. An urgent MPA can only remain in place for a maximum of 2 years, after which time the site would need to be made permanent, following full assessment and public consultation.

Interim management measures came into force on 17 March 2021 and initially are in place for a period of 12 months. NatureScot has advised that the site is of national importance to the conservation of this critically endangered species, and recommended that a precautionary approach is taken when developing interim protection. Scottish Ministers have therefore chosen to prohibit all activities with the potential to adversely impact the egg nursery area whilst permanent protection measures are developed.

In line with urgently re-designating the site, Scottish Ministers revoked the original urgent Marine Conservation Order (MCO). A new urgent MCO was made and came into force on 16 December 2021 and will continue to restrict activities which may adversely affect the area in the same manner as the original urgent MCO across the extended site.

Full stakeholder engagement, impact assessment and public consultation will be undertaken during the development of permanent protection proposals. A full list of interim management measure are available in the Marine Conservation Order and include:

Public notification: Proposal to designate Red Rocks and Longay as a Marine Protected Area with an associated Marine Conservation Order, and the making of an Urgent Continuation Order

The Red Rocks and Longay (MPA) was urgently designated in March 2021 for protection of critically endangered flapper skate within the Inner Sound of Skye and was re-designated in December 2021 to extend the boundaries of the MPA. An urgent Marine Conservation Order was put in place at the same time on each occasion prohibiting certain activities in the Red Rocks and Longay MPA.

In accordance with sections 75, 87(6) and (7) and 88 (7) of the Marine (Scotland) Act 2010, we hereby give notice that Scottish Ministers propose to designate Red Rocks and Longay as a nature conservation Marine Protected Area (MPA) on a permanent basis and to make an associated Marine Conservation Order (MCO) to further the stated conservation objectives for the proposed Red Rocks and Longay MPA.

A consultation on the proposals to designate Red Rocks and Longay as a permanent MPA with an associated MCO was launched on 01 February 2022. You can access and respond to the consultation online using the Scottish Government’s consultation hub, Citizen Space. Responses are due by 26 April 2022.

In accordance with section sections 75 (2) and 87(7)(b) of the Marine (Scotland) Act 2010, the draft orders and a map identifying the area's boundaries are available for inspection on the consultation hub. Alternatively, a copy of the draft Orders and map can also be requested by writing to:

Full details of the proposals and all supporting documentation are available via the consultation hub.

Making of an Urgent Continuation Order

In order to continue protection within the site whilst public consultation is undertaken, in line with the Marine (Scotland) Act 2010, an Urgent Continuation Order (The Red Rocks and Longay Urgent Marine Conservation (No. 2) Order 2021 (Urgent Continuation) Order 2022) will be laid in parliament on 03 February 2022 and come into effect on 16 March 2022.

Supporting documentation and information relating to these orders is available above.

Copies of the Urgent Continuation Order may also be requested by writing to:

Alternatively, the order is available for inspection at the above address. You can email marine_conservation@gov.scot to request a copy or to make arrangements if you would like to inspect the Order in person.

The Red Rocks and Longay Urgent Marine Conservation (No 2) Order 2021 can be viewed on legislation.gov.uk. Supporting documentation and information relating to these orders are available on this page.

Copies of the designation order and Marine Conservation Order may also be requested by writing to:

You can also email marine_conservation@gov.scot. Alternatively, the orders are available for inspection at the above address.

Scottish ministers have power to revoke the designation order and the Marine Conservation Order and any person affected by the making of the orders may make representations to them.

Fishing vessel licence conditions have been amended to incorporate restrictions within the MPA. A fishing vessel must not be present within the MPA other than when travelling at a speed of greater than six knots (except in the case of force majeure, adverse weather conditions or fishing for pelagic species with trawl or encircling nets).

In the case of either you must get in touch and give details of the vessel's intentions:

A permit can be acquired from Marine Scotland Licencing Operations Team to allow particular activities which would otherwise be prohibited within the MPA, so long as they are for the purpose of scientific research and there is no significant risk of the particular activities hindering the achievement of the stated conservation objectives. A full list of these are available in the Marine Conservation Order.

Future plans for the site

hese sites contribute to Scotland’s international commitments to protect the marine environment in the North-East Atlantic, as required under the Oslo and Paris Conventions (OSPAR Convention).

Following advice from NatureScot, Scottish Ministers consulted on the four inshore MPAs in summer 2019. These sites protect a range of features including mobile species (such as minke whales, basking sharks and Risso’s dolphins) as well as seabed habitats. Read the consultation analysis report. These sites are:

Final advice from NatureScot, including management advice and conservation objectives, and site information, is available on the NatureScot website. In addition, Marine Scotland has prepared recommendations for management in light of the NatureScot advice.

The West of Scotland MPA is the biggest MPA located in national waters in the entire North-East Atlantic and underpinned by the powers in the Marine and Coastal Access Act 2009.

Featuring the deepest parts of Scotland’s seas at over 2,500 metres, the site safeguards some of the most vulnerable habitats and species on the planet, including deep sea sharks, coral gardens and a variety of other fauna.

It provides protection to 14 vulnerable habitats and species, including the Leafscale gulper shark, Orange roughy and Portuguese dogfish. Ten of these habitats and species have been declared as being in decline and under threat in the North-east Atlantic under the OSPAR Convention.

Scottish Ministers completed a Strategic Environmental Assessment (SEA) post-adoption statement and a final Business and Regulatory Impact Assessment in regard to the West of Scotland MPA.

Final advice from the Joint Nature Conservation Committee (JNCC), including conservation and management advice, is available from the JNCC website.

Following original proposals in 2016, twelve marine SPAs were classified on 3 December 2020. These sites are:

Final advice from NatureScot and the Joint Nature Conservation Committee, including management advice and conservation objectives, and site information, is available on their websites.