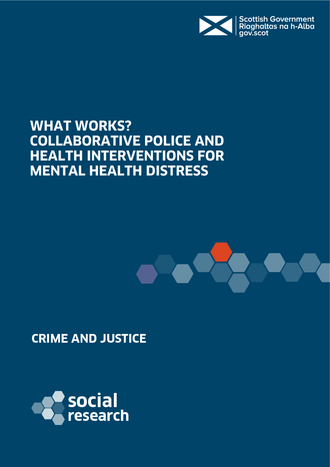 There are two collaborative interventions currently being piloted in Scotland which seek to address mental health distress. Firstly, Community Triage ( CT) is a Police Scotland led intervention which was initially piloted in the Greater Glasgow and Clyde area in 2015 and has since been piloted in Edinburgh and Dundee. CT has been advocated by the Justice Vision and Priorities (Scottish Government, 2017) and by SAMH (2017). Police Scotland and health services continue to work together to develop these local partnerships.

Distress Brief Interventions ( DBI) were developed in response to the Scottish Government's Suicide Prevention (2013) and Mental Health (2012) strategies. The programme is set up as a two tiered, collaborative service working towards a common goal of providing a compassionate and effective response to those in distress. The first tier is delivered by front-line staff (primary care, police, ambulance and A&E) to ensure they provide a compassionate response with accurate referrals onto tier two. Tier two is provided by third sector organisations who are appointed at the local level as appropriate to provide community based support within 24 hours and for up to 14 days ( DBI, 2017a). This intervention is difficult to categorise within the three identified categories. Generally, it aligns with an increased training model but it focuses more on the increased liaison, particularly onward referrals and care. The DBI pilot covers four areas in Scotland: Aberdeen, Inverness, Scottish Borders and North and South Lanarkshire and is co-ordinated by a programme board that reports into the Scottish Government. The pilot is set to last 53 months and a full evaluation is being carried out.

Other types of promising interventions
Types of Interventions and What Works