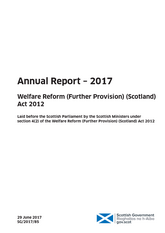 Financial Impact of Welfare Reforms at a Local Authority Level

Impact of Welfare Reform on Income Inequality and Poverty

Sections 8 -10 of this report provide a detailed summary of the background, latest developments and impacts of each welfare measure related to the Act and other significant welfare measures. Key points to note are: