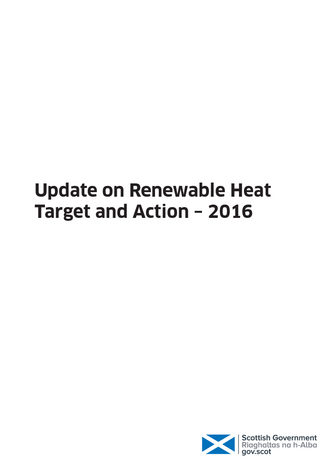 In June 2015 the Scottish Government published its Heat Policy Statement Towards Decarbonising Heat: Maximising the Opportunities for Scotland. This sets out how Scotland might use less energy for heat, and how low carbon heat can reach more householders, business and communities and a clear framework for investment in the future of affordable low carbon heat in Scotland in order to largely decarbonise the heat system by 2050.

The Heat Policy Statement [1] and the 2020 Routemap for Renewable Energy in Scotland replaces the Renewable Heat Action Plan, (which was updated in 2010, refreshed in 2011 and subsequently subsumed into the 2020 Routemap). An update on the Routemap was provided in September 2015.

The Climate Change (Scotland) Act 2009 ( CCA) requires Scottish Ministers to report regularly on the progress towards meeting the target to deliver 11% of non-electrical heat demand from renewable sources by 2020. This complements the energy efficiency target to reduce the total final energy consumption in Scotland by 12% (against a base line of the average energy consumption in 2005-07), and underpins our ambitious climate change targets including an 80% minimum reduction in greenhouse gas emissions by 2050 and a world leading 42% reduction by 2020.

This report fulfils the requirement in the Climate Change (Scotland) Act 2009 to report on the Renewable Heat Action Plan.

Progress Towards the Renewable Heat Target

The Heat Policy Statement reiterated our heat hierarchy: reducing the need for heat through energy efficient buildings; supplying heat more efficiently and at least cost to consumers, such as development of district heating and the use of unused excess heat through heat recovery; and then using low carbon and renewable heat. All three aspects of the hierarchy have relevance to the renewable heat target. Both reducing the demand for heat and increasing the useful heat provided increase the percentage of renewable heat provided. Efficient supply systems such as well-designed and operated district heating can help to deliver renewable heat produced to more users.

The Policy Statement retains our ambition to achieve 1.5 TWh of Scotland's heat demand to be delivered by district or communal heating.

New and emerging initiatives include designating energy efficiency as a National Infrastructure Priority; the Low Carbon Infrastructure Transition Programme ( LCITP) launched in March 2015, with £76 million over the first 3 years; and a support programme for local authorities to develop a strategic approach to district heating, managed by the Heat Network Partnership ( HNP).