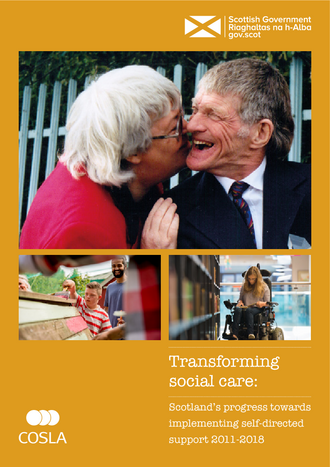 Since 2010, Scotland has been on a journey to embed self-directed support as Scotland’s mainstream approach to social care. The Social Care (Self-directed Support) (Scotland) Act 2013 was passed to ensure that social care is controlled by the supported person to the extent that they wish; is personalised to their own outcomes (including where they receive services commissioned or delivered by the public sector); and respects the person’s right to participate in society.

Implementation of this approach has formed three phases to date.

The Scottish Government, working in partnership with COSLA, has taken a collaborative approach throughout. Extensive engagement has taken place with supported people, carers, providers from the independent and third sectors, disabled people’s organisations, local authorities and, more recently, integration authorities and national partners.

Audit Scotland produced a progress report in 2017, following an audit of self-directed support implementation in 2014. One of the recommendations was that “the Scottish Government should report publicly on the outcomes … achieved from the almost £70 million funding it has committed to support implementation of SDS.” This transformation funding to support change in the system (£70 million over a seven year period) was in addition to local government gross expenditure of £4.2 billion on social care in
2016-2017 alone.

"Social care is changing. To get the care that we as a nation need and want, self-directed approaches must be at the heart of current practice and future thinking." Minister for Public Health, Sport and Wellbeing

The purpose of this report is to meet that recommendation, identifying the progress made between 2011 and 2018 towards delivery of this transformational change in social care. In producing the report, we have worked closely with our partners (principally Social Work Scotland, who carried out primary research in 14 local authority areas, NHS Education Scotland and Scottish Social Services Council) around the outcomes and learning gained during this period.

The report is set out in four chapters, one for each of the destination outcomes the Self-directed Support Implementation Plan 2016-2018 aims to progress towards. Section headings describe the intermediate outcomes achieved at this point in the journey and short sets of evidence are provided to demonstrate how progress has been delivered. A breakdown of the £70 million Scottish Government transformation funding is provided on page 22.

While this report is a brief high-level overview, it will be supplemented by additional work to share both the good practice and the 250+ operational tools developed as a result of this funding.

COSLA welcomes this report. Councils and Integration Authorities are implementing major transformational reform to support personalised outcomes for people experiencing care. All the while, they face the challenge of delivering these reforms against a backdrop of increasing demand and increasing complexity of need.
Councillor Peter Johnston, COSLA

Self-directed support is part of a suite of Scottish policies which form a coherent and inter-related whole sometimes known as the Scottish Approach. During the period under discussion, a significant and ambitious programme of work was undertaken to integrate health and social care structures and move to greater emphasis on anticipatory and preventative care. Local/integration authorities also experienced the continuing combined pressures of financial constraint and increasing demand for services, driven in part by changing demographics.

As our understanding of working to shared outcomes across the public sector matures, we increasingly work in ways that break down silo approaches. The approach taken in this report is to describe the changes identified across the system, many of which can be directly attributed to Scottish Government funding for the transformation to self-directed support (see page 22) or were strongly influenced by work done under that funding (such as changes to procurement legislation). Other changes described may have been resourced through other routes in whole or in part, drawing on resources from local authorities, integration authorities or other Scottish Government/public funding.

"We set up an SDS programme board, which was chaired by our Director of Health and Social Care and on that was all of our Heads of Service from across Social Work, Finance, Legal, Contracts and Commissioning, operational Social Work, some Health folk, Internal Audit. Recognising the scale of transformational change wasn’t just about social work practice it was everything … We had HR there, we had the unions…

At every programme board, somebody who used services or a family carer came and told their story. And what that did was bring a lot of the policy and systems stuff to life. Particularly for people who didn’t work in social work, the senior managers. So if you were an Audit Manager, a Finance Manager, you were hearing what it actually meant for people."
Social Work Scotland research participant

A supported person should be involved in developing their support plan (as described in Section 9 of the Statutory Guidance to accompany the Social Care (Self-directed Support) (Scotland) Act 2013), understand the four options available to them, and know the budget available for their social care. Choosing services that are provided, procured or directed by the Authority (known as Option 3 under the legislation) is included within self-directed support where these conditions are in place.