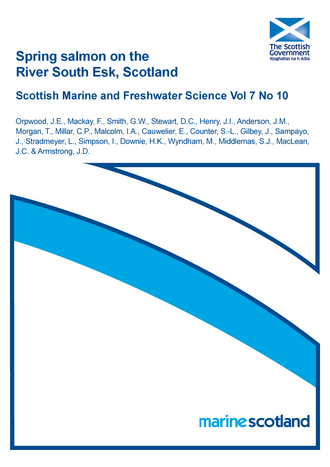 Effort data relating to the spring salmon rod fishery was scarce. However, effort data relating to an 11-year period (2002 to 2012 inclusive) were sourced from one of the six rod fisheries contributing most to the overall spring salmon rod catch on the River South Esk. These data provided evidence of a reduction in rod effort over the period for which data are available, notably a step-change in the percentage of beat days let from 2005 onwards. Catch per unit of effort ( CPUE) tended to be relatively stable across the time series as a whole, although there was evidence of a decline in later years (2007 to 2012). Examination of the high definition data revealed a significant decline in effort over the period 2007 to 2012, and this coincided with a significant decline in CPUE over the same period. Further evidence for a reduction in rod fishing effort came from a subset of "high definition" data available for the period 2007 to 2012 inclusive, which also showed a tendency for the number of rods booked per beat day let to decline, despite the number of beat days let remaining relatively constant over this period. Translating these results to the River South Esk as a whole requires a degree of caution, since these effort data were sourced from just one fishery. Nonetheless, the fishery providing the data is among those contributing most to the overall spring rod catch on the river. If the effort data available from this fishery are typical of other spring salmon rod fisheries up and down the river, then there is the possibility that declining rod catches of spring salmon on the River South Esk reflect a decline in rod fishing effort.

It was not possible to use genetic tools ( SNPs) to identify geographic origins within the South Esk catchment because there was not sufficient spatial genetic differentiation between areas within the system. Similarly, SNPs could not be used to determine the representation of different rivers stocks in the nets because there is not enough differentiation detectable among the large Scottish east coast rivers using the techniques employed.

In conclusion, considering the early running component of the River South Esk salmon stock, the majority of fish spawn in the upper catchment, and it is encouraging that densities of salmon fry in this area are generally as good as or better than expected. The limited available rod fishing effort data suggest a decline in angling effort for spring fish coinciding with a reduction in CPUE in recent years. Between 8 % and 29 % of the spring salmon catch from the coastal net fishery adjacent to the River South Esk was estimated to be destined to spawn in the River South Esk.