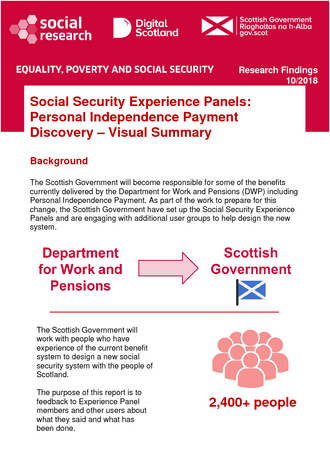 The Scottish Government will become responsible for some of the benefits currently delivered by the Department for Work and Pensions ( DWP) including Personal Independence Payment. As part of the work to prepare for this change, the Scottish Government have set up the Social Security Experience Panels and are engaging with additional user groups to help design the new system.

The Scottish Government will work with people who have experience of the current benefit system to design a new social security system with the people of Scotland.

The purpose of this report is to feedback to Experience Panel members and other users about what they said and what has been done.

This report summarises the results of the Personal Independence Payment research which took place in late 2017 and early 2018.

All Experience Panel members who told us they had previous experience claiming Personal Independence Payment were invited to take part. 52 people with experience of PIP were recruited through other channels.

In one to one interviews, we spoke to Experience Panel members and others:

Events were held in:

How you found out about PIP

Experience Panel members told us they found out about PIP from many different sources.

There is no one way in which most people found out about PIP.

How you applied for PIP

Lots of Experience Panel members told us that they found the initial phone call difficult.

Experience Panel members also found the form unclear and felt it made them repeat themselves.

Nothing on the application form mentions pain, safety or tiredness.

"I was quite overwhelmed with the number of questions they were asking and how the questions were worded."
Experience Panel member

Scottish Government is redesigning how we gather the information we need to deal with your claim to make it easier for you.

Some Experience Panel members liked the idea of filling the form in online, but others didn’t like computers or didn’t want to put personal details on the internet.

Scottish Government will make sure people can complete the application form online, by paper or by talking to someone face to face.

How much time you are given to fill in the form varies, depending on when the form is sent out and how long the post takes.

Many people wanted help to fill it in, but Citizen’s Advice and other organisations have long waiting lists which meant they could not meet the deadlines set by DWP. Gathering and posting off additional evidence (for example, from your consultant) was time consuming and many participants told us they did not have enough time to do this.

Feeling rushed mean it was easier to make mistakes or to forget about things you wanted to say. Some people stayed up all night to get the form finished and had no time to check it before it had to be posted.

Deadlines also make it hard to apply for Mandatory Reconsiderations or an Appeal.

"The time factor is the worst thing…"
Experience Panel member

Scottish Government are looking at how to make sure you have enough time to fill in the form.

Scottish Government are also trying to find ways to help you find the evidence you need to support your application.

For most Experience Panel members who took part, the face to face assessment is the most negative part of applying for PIP.

Participants told us that they were asked to go to assessment centres that they could not travel to, at times they couldn’t manage. They were only allowed to change the appointment once, but this did not take into account that someone could be ill on the day.

This approach does not recognise that people have conditions they cannot predict, or that they might be in hospital or have a flare-up that could prevent them from attending.

For some Experience Panel members, attending assessment centres had a severe impact on their health. Some told us they were driven to suicidal thoughts and self-harm by the stress of face-to- face assessments.

"The face-to-face assessment for PIP was honestly one of the most traumatic experiences of my adult life."
Experience Panel member

Scottish Government are looking at how we can make this better so that everyone gets an assessment appointment that works for them.

Once Experience Panel members were at an assessment, they told us that they felt assessors didn’t know anything about their condition, didn’t listen to what they said and wrote things in their report that were not true.

When some turned up to their assessment, they felt assessors used that against them however if they didn’t turn up they lost their claim.

Many participants told us it was not clear when the assessment begins. Assessors often take the first answer and don’t give you the chance to explain.

Most Experience Panel members found the actual assessment better than they had expected, but for many this changed when they saw the report. People felt assessors had not written down important information, or had twisted the things they said to make them mean something different.

"…because I had actually turned up and I was there, she said in my assessment that she didn’t believe my anxiety was so bad."
Experience Panel member

Scottish Government are looking at how we can make sure assessments are accurate and fair.

Beyond the Experience Panels

We also spoke to people who weren’t on the Experience Panels. This allowed us to talk to a broader range of people who had experience of PIP.

We had five workshops with autism, mental health, deafness and arthritis charities. We also interviewed a further 27 people who were not Experience Panel members. This included those who had recently been through an appeal and people who had just moved from DLA to PIP.

For some of these people, PIP had worked well. One lady told us her son, aged 17, had been suddenly diagnosed with leukaemia. In the midst of all the fear and aggressive medical treatment, support from the children’s cancer charities and a sympathetic assessor who visited them at home meant the family got the money they needed.

"…my assessor was really lovely. She was awesome. […] She prompted me because my memory is bad. It’s like when I get my words mixed up."
Interview participant

One young woman told us about an assessor who understood her condition because she had the same condition herself.

"I was saying my skin hurts and I can’t get showers; some days I have to get a baby wipe wash because my skin is so sensitive; it feels like pins coming out of the shower head, its so horrible. And whilst I was explaining that, she was like "yeah, I completely understand this. This is what I have. I struggle with this as well.""
Interview participant

However other people found assessments to be a tick-box exercise, with assessors sticking rigidly to the questions on the form and refusing to write down anything they decided was unimportant.

"He said "I’d appreciate if you just answered the questions I was asking, because that’s not on the form." I’m a person, I’m a human and I don’t necessarily fit into the boxes on the form."
Interview participant

Doctors told us that they prescribed more anxiety and depression medication – and at higher doses – because applying for PIP was so difficult.

Some people we spoke to received their award after a phone call to request a mandatory reconsideration:

"[On the phone] she drew that information out of me in amongst my sort of rambling where I was like 'But I can’t do this'. She would say 'Oh now hold on, what did you say about that'. She picked and teased out information."
Interview participant

Teenagers were upset when assessment reports called them overweight; young people who were deaf or had autism were told they made "good eye contact" during the assessment, when actually they were reading lips or focusing their eyes on the assessor’s forehead.

Young people moving from Disability Living Allowance ( DLA) to PIP talked about having to "appear" disabled so that assessors would understand their conditions genuinely existed.

A sixteen-year-old with arthritis told us her mother had trained her for two weeks before her face-to-face assessment to break her of the habit of saying "I’m fine" because they worried the assessor would take that as her final answer.

Both Experience Panel members and other users said…

While work with different groups of people gave us a wider range of PIP experiences, most people we spoke to told us that trust had broken down.

It is clear the new system must be transparent, accessible, flexible and kind. It must work for the people who use it.

Now, we will be working on what we need to do to make that a reality.

The Experience Panels project will continue throughout the coming years, informing the continued development of social security in Scotland.

The Scottish Government will continue to work with Experience Panel members and others users who have direct experience of claiming benefits to create a social security system that works for the people of Scotland.

This will include further work in the future to help us design the application process for disability benefits.

The data collected for this social research publication:

☐ are available in more detail through Scottish Neighbourhood Statistics

☐ are available via an alternative route

☒ may be made available on request, subject to consideration of legal and ethical factors. Please contact James.Miller@gov.scot for further information.