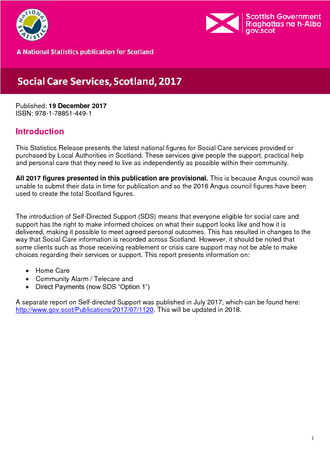 This Statistics Release presents the latest national figures for Social Care services provided or purchased by Local Authorities in Scotland. These services give people the support, practical help and personal care that they need to live as independently as possible within their community.

All 2017 figures presented in this publication are provisional. This is because Angus council was unable to submit their data in time for publication and so the 2016 Angus council figures have been used to create the total Scotland figures.

The introduction of Self-Directed Support ( SDS) means that everyone eligible for social care and support has the right to make informed choices on what their support looks like and how it is delivered, making it possible to meet agreed personal outcomes. This has resulted in changes to the way that Social Care information is recorded across Scotland. However, it should be noted that some clients such as those receiving reablement or crisis care support may not be able to make choices regarding their services or support. This report presents information on: