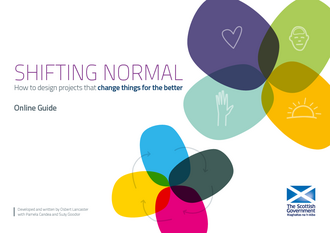 Following their initial research (see What mattered for Sometown Cycle Group) the group developed a range of projects to make walking, cycling and using public transport feel right, make sense, and easy to do everyday. Most of the projects carried out activities that address all four zones: I, We, They and It. The numbers after each activity show which of aspects of four questions and four zones it addresses - see the table below. People, groups and organisations that supported, or grew out of, the projects are asterixed*.

Many people had bikes already and would have liked to use them more, but either they lacked confidence or their bikes needed maintenance. Cycling felt right and made sense but wasn't do-able, so Sustaining Dunbar offered:

Their What's Stopping You Pledge encouraged people to make a commitment to cycle more (5) and provided a £20 voucher to spend at a local bike shop*, not only providing tools and equipment (6), but, just as importantly, encouraging a relationship with a local business they can trust to help them (7).

The Dunbar Cycling Group*, which grew out of the project, ran family friendly social rides, not only increasing skills and confidence (8), but also making cycling more visible and widespread among people's social groups (9). Look after your bike sessions gave people confidence to carry out basic maintenance and road-side repairs (10), so they could venture further afield by bike without fear of being stranded (11).

The Cycle Friendly Dunbar project increased cycle parking, provided public bike pumps around town and 'bike first aid kits' at 'cycle friendly' cafes* and other local businesses* (12) with support from Cycling Scotland* (13). This not only made tools and equipment easily available (13) but also made cycling visibly a normal way to travel travel around town (14).

The group's work with children and schools aimed to develop the cycling habit early (15) and to make cycling a normal way for children to get around (16). Working with teachers and parent volunteers (17), the national Bikeability scheme (18) was embedded in the curriculum (19) at Dunbar Primary to provide on-road cycle training for pupils. At Dunbar Grammar School Bikeability training (18) is run for S2s and mountain biking is now a school activity (20), making cycling fun and sociable (21). Development of an annual second hand bike market makes it easy and affordable for pupils and parents to buy and sell bikes as the children grow (22). The group works with Sustrans to support the annual Big Pedal (23) at Dunbar schools.

While these activities helped increase cycling in the town, Sustaining Dunbar recognised bigger changes were needed if active travel (cycling and walking) and public transport were to become the first choice for more people when they needed to get about.

Technical note: How the Four Questions and Four Zones framework relates to ISM

This guide is based on the key principles from the Individual Social and Material ( ISM) Tool developed for the Scottish Government. The ISM tool is intended to be a practical device for policy makers and other practitioners who want to influence people's behaviours and bring about social change. The ISM tool draws on a wide range of research from different academic disciplines including behavioural economics, social psychology and sociology. It identifies a number of factors that influence behaviour, and groups these into three contexts: the individual, the social and the material.

The Four Questions and Four Zones framework takes the insights from the ISM tool and re-presents these in a way that is designed to be intuitive and accessible for use in a community setting. It is not necessary to understand the ISM tool to use the Four Questions and Four Zones framework effectively. However, for people interested in the academic roots of the framework or interested in how the it 'maps' to ISM, the design process is outlined below.

From contexts to zones

ISM is based on theory and evidence which shows that three different context influence people's behaviour: the Individual, Social and Material. We found people can be confused by the Material context which includes physical factors such as objects and infrastructure as well as intangible factors such as regulations, time and schedule. We therefore created a new

'zone' of "It" for physical factors. We also split the Social Context into "We" and "They" to make more explicit the distinction between people's social groups (which are especially relevant in a community context) and wider society. Some intangible Material factors were included in "They" as they can be considered expressions of wider society. This is summarised in the table below.

From factors to questions

As far as possible we wanted people to be able to use the framework without needing to learn new terms or concepts. We found that creating questions for people to ask about why someone might or might not do something - undertake a new behaviour - was an effective way of doing this. In previous work we have found people easily grasp the familiar concepts of heart, head and hand, and that these easily translate into the questions: does it feel right, does it make sense, and can I do it? The fourth question, does it fit into my day, was added to capture habits, time and schedules.

Putting the four zones and four questions together

The 16 cell matrix of the framework shows how each of the four zones can influence each of the four questions that determine whether a person does or does not do something. While the ISM factors can be mapped to one or more of the cells in the matrix, our experience suggested that expecting people to understand a potentially complex factor and to relate it to their project would be a barrier to adoption. We therefore created a series of detailed questions that are designed to lead the reader to the same result as considering the relevance of a particular factor to their situation. Most of the factors are addressed by one or more questions; some questions can be related to more than one factor. While additional questions could be devised we aimed for no more than two questions per cell to prevent the framework becoming overwhelming, in a few cases we felt three questions were necessary to ensure important factors were not ignored. The questions are open-ended to prompt discussion and exploration.