There is a large variation between Local Authorities’ providing Self Directed Support:

Further Local Authority analysis can be found in the annex. 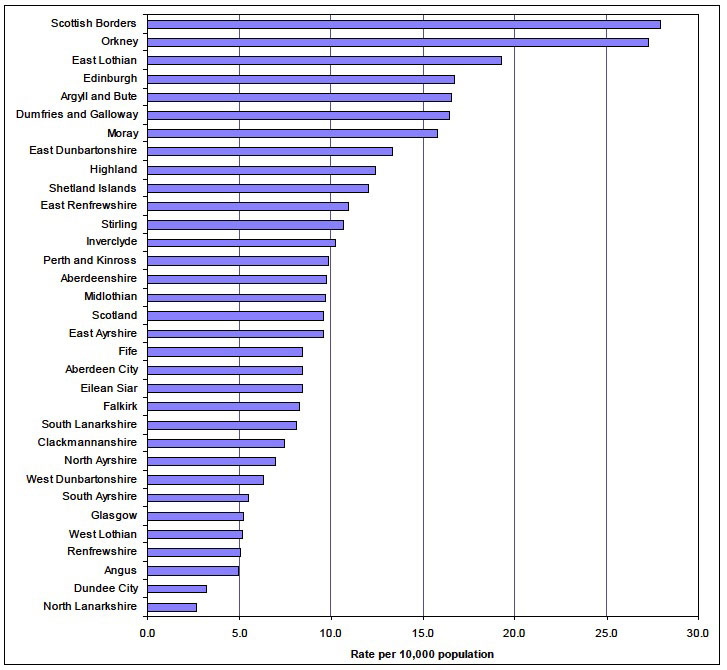 Background information on the collection of the data

The Self-directed Support (Direct Payments) survey began in 2001 and collects information on Direct Payments from all Local Authorities in Scotland.

The format of the survey was changed in 2006 to a person based return. This may have resulted in some inconsistency compared to previous years. The new survey asks for gender, date of birth, client group, value of direct payment throughout the year, weekly hours in the direct payment package, type of direct payment provision and type of care delivery along with a number of other variables.

In 2010, the data collection changed from an Excel spreadsheet to local authorities submitting the data to the Scottish Government via a secure web-based system called ProcXed. The ProcXed team in Scottish Government support and develop secure, efficient and effective electronic data exchanges between local authorities and Scottish Government. The system reduces administrative burdens and increases the speed, ease and accuracy (via inbuilt data validation checks) of information exchange. It additionally encourages best practice and improves access to benchmarking information. Moreover, the ProcXed system provides a secure method of sharing data. Further information about ProcXed can be provided on request using the contact details below.

In 2010, the client group categories were reviewed by Community Care Statistics and aligned to the 2010 home care statistical return. It may not be possible therefore, to directly compare some client group analysis over time.

In 2010, Renfrewshire were unable to provide detailed information about the packages of support. An estimated value of their packages has been included in the Scotland total based on the average value of direct payment for Scotland, multiplied by the estimated number of packages for Renfrewshire (based on the number of clients which was provided).

All 32 local authorities provided information in 2012.

Some column totals in the tables in this document may not exactly equal the sum of their component parts due to the effects of rounding.

Argyll & Bute have revised their 2010 financial figures, by £220,877 (one payment was incorrectly calculated).

To calculate the cost of respondent burden to this survey each Local Authority was asked to provide an estimate of the time taken in hours to extract the requested information and complete the survey form. The average time from 19 Local Authorities has then been used within the calculation below to calculate that the total cost of responding to this survey is £6,742.

The Self-directed Support (Direct Payments) survey has recently undergone a review by the Scottish Government with data providers and users. From 2013, the survey will be combined with the Home Care survey into a larger Social Care survey. Further details can be found at:

Information at local authority level is shown in the annex to this Statistics Release.