This Statistics Release presents the latest figures on the number of people in Scotland who use Direct Payments to purchase and manage for themselves some or all of the social care and support services they need. The latest figures apply to payments made during the period 1st April 2011 to 31st March 2012.

Self-directed support (SDS)is a term that describes the ways in which individuals and families can have informed choice about how their social care and support is provided to them. SDS gives people control over an individual budget and allows them to choose how it is spent on support which meets their agreed health and social care outcomes.

SDS includes a number of options for getting support. The person’s individual budget can be:

1) Taken as a Direct Payment (a cash payment)

2) Allocated to a provider the individual chooses.The council or funder holds the budget but the person is in charge of how it is spent (this is sometimes called an individual service fund)

The information in this Statistics Release is derived from returns made to the Scottish Government by Scottish Local Authorities and relates only to people who take SDS as a Direct Payment (option 1 above). 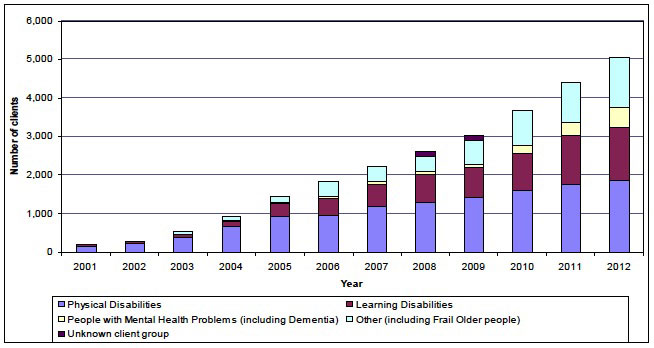 Note: Prior to 2010, the Dementia client group was not collected separately and may have been included under ‘Mental Health Problems’ or ‘Other’.