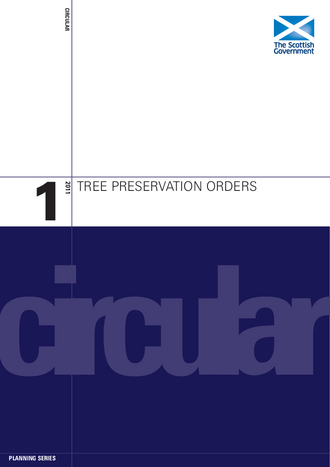 4. A planning authority may make a TPO if it appears to them to be :

5. If it appears to Scottish Ministers that it is expedient that a TPO, or a variation or revocation Order, should be made, they may make such an Order.

6. Scottish Ministers are only likely to use this power in exceptional circumstances where national issues of importance are raised.

8. The Scottish Government's preferred Model Order is contained within Annex A.

9. The Town and Country Planning (Tree Preservation Order and Trees in Conservation Areas (Scotland) Regulations 2010 make provision for the form of a TPO and the procedure to be followed when making and confirming a TPO. Regulation 3 requires that a TPO must define the position of the trees to which it relates by means of a map. The map must be to a scale which is sufficient to give a clear indication of the position of the trees. In terms of section 161 (2) a confirmed TPO must be recorded in the Register of Sasines or registered in the Land Register of Scotland. Land Register applications need to be identifiable on the Ordnance Survey Map and any deed presented for registration in either the Register of Sasines or the Land Registers should also meet this criteria.

10. A TPO will take effect on a date that is specified in the order, but will expire within a period of 6 months after this date if it has not been confirmed by the planning authority within that 6 month period. 4

11. A TPO may also be made for any trees to be planted in compliance with a condition of planning permission. The TPO will apply from the time that the trees are planted. 5

12. A planning authority must as soon as may be after making the TPO 6 -

14. The planning authority may confirm the TPO either: 8

15. As soon as a TPO is confirmed, the planning authority are required to record it in the appropriate Register of Sasines or register it in the Land Register of Scotland. 9

16. The Keeper will continue to offer a free service to consider draft TPOs prior to registration in either the Register of Sasines or the Land Register, preferably with a minimum of 10 working days to complete this service.

17. Where the TPO is confirmed, 10 it must be endorsed to that effect including an indication of whether the order was confirmed with or without modifications and the date.

18. As soon as possible after confirming the order the planning authority must give notice to:

a. An owner, lessee and occupier of the land on which the trees groups of trees or woodlands to which the TPO relates are situated

b. Any other person who to the knowledge of the planning authority, would but for the TPO be entitled -

i. to fell, top, lop, uproot or otherwise damage or destroy any tree to which the tree preservation order relates; or

ii. to work by surface working any material in, on or under such land.

Action where TPO is not confirmed

22. Where a planning authority decides not to confirm a TPO 12 it must as soon as is practicable:

23. Section 275(8) of the 1997 Act makes it clear that planning authorities may vary and revoke TPOs by making another order.

26. There is no requirement to provide a map for revocation or variation Orders where trees are being removed from the original Order, 14 however this does not prohibit the use of a map where it is thought to be of assistance.

28. Where a revocation Order is confirmed the planning authority must withdraw from public inspection the copy of the original Order. 16

29. It is an offence 17 for any person in contravention of a TPO to cut down, uproot, wilfully destroy a tree or wilfully damage, top or lop a tree in such manner as to be likely to destroy it without the consent of the planning authority.

30. A person guilty of an offence shall be liable on summary conviction to a fine not exceeding £20,000 and on conviction of indictment to a fine.

31. Section 28(2)(c) of the 2006 Act provides Scottish Ministers with powers to determine the form and manner of applications for consent under a TPO.

32. The Regulations require 18 that the application must be made to the planning authority specifying the operations for which consent is sought, the reasons for such operations and must identify by means of a map or plan (of sufficient size and scale) the protected trees that would be affected.

34. A TPO may make exemptions 19 to the prohibition of cutting down, topping, lopping, uprooting, wilful damage or wilful destruction of trees except with the consent of the planning authority.

35. The Model Order ( Annex A) provides a list of suggested exemptions.

36. Without prejudice to any other exemptions made by the TPO, nothing in the TPO shall prohibit the uprooting, felling or lopping of trees if : 20

so long as notice in writing of the proposed operations is given to the planning authority as soon as practicable after the operations become necessary.

37. Section 162 of the Act 22 sets out the exemptions for the Forestry Commission.

38. Although not a requirement of legislation, Scottish Government Policy is that consent under the order should not be required where full planning permission has been granted that involves works to trees. This is reflected in the exemptions in the Model Order contained within Annex A.