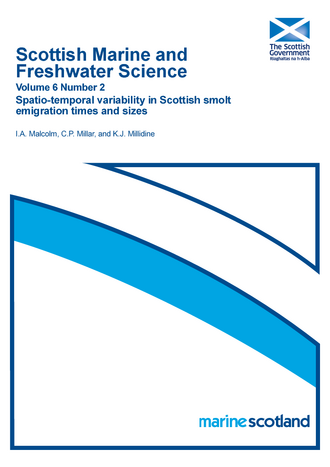 The Scottish Government has set ambitious targets for renewable power generation. Marine Renewable Energy, including wind, wave and tidal power are expected to contribute significantly to these targets. Information on the timing of Atlantic salmon smolt migrations is required for planning coastal development and the timing of particular activities. Information on smolt sizes is required to plan acoustic tagging studies aiming to improve understanding of fish movement and behaviour in the coastal zone. This report assessed pre-existing information on smolt migration timing and sizes. The commencement of migration was characterised as the day of the year (DoY) on which 25% of smolts had migrated (S25); the end of the migration period was characterised as the DoY on which 75% of smolts had emigrated (S75). The start and end of the migration period varied with elevation and over time, but not as a predictable function of geographical location (latitude and longitude). Thus, a single coastal migration DoY range (S25 to S75) was estimated for the whole of Scotland. By including uncertainty in the predictions it was possible to identify a "sensitive window" for development, where large numbers of migrating salmon smolts could be expected in the coastal zone. This window covers the period DoY 103-145. This envelope does not consider the time that smolts will spend in the coastal zone, so further work is required to adjust this window appropriately. It was not possible to model the spatio-temporal variability in smolt sizes given available data and resources. However, considerable inter-site and inter-annual variability was observed. The data presented here could be used to inform future acoustic tagging studies at existing sites, although it is suggested that pilot data should be obtained where work is to be carried out at new sites.