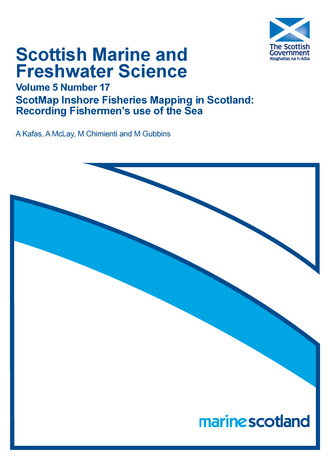 The data collected during the ScotMap project show that Scottish registered vessels under 15 m in length fish all around Scotland and in some cases more than 12 NM from the shore. From the aggregated data it is possible to distinguish areas of relatively high fishing activity and/or fisheries value. Mapped outputs from ScotMap provide information on the distribution of fishing, both in terms of where different types of fishing take place and the economic importance of different sea areas, at a much higher spatial resolution than was previously possible i.e. at the level of ICES statistical rectangles. Any use or interpretation of the outputs should, however, take account of the information on which they are based, particularly the extent to which they represent all the relevant fishing activity within an area and also the accuracy of the information provided.

Although the majority of fishermen contacted for agreed to be interviewed and many were enthusiastic about the project, a proportion of skippers declined to take part or to provide earnings information. In some areas it was not possible for interviewers to make contact with all the vessels on the initial target list. On the basis of analyses of interviewed versus non-interviewed vessels, there is appears to be some regional variation in the refusal or contact failure rate. This will affect the outputs and variation in interview coverage should be recognised by users of the data.

The representations of the vessel number and value of fishing in different sea areas are based on the spatial (the fishing polygons) and value information (the estimates of average annual gross earnings and percentage associated with each polygon) that fishermen provided. Whilst it is possible to check fishermen's estimates of earnings against those of landings as recorded on FIN, it is much more difficult to validate the accuracy of the spatial data, there being no alternative source of information at such fine spatial scales.

For validation of the spatial aspects the project relied on feedback provided at the consultation meetings, particularly that regarding the location, extent and areas of highest intensity of the different fisheries as indicated by the maps. Attendees generally had good local knowledge and, in some cases, knowledge of fisheries elsewhere and were able to offer informed comment. ScotMap also benefitted from the involvement of Marine Scotland Compliance in the data collection and validation process, Compliance staff having detailed knowledge of the fisheries and fishing practices in their locales. At most meetings there was good agreement about the main fisheries identified, their location and the foci of activity, and the feedback received provided reassurance that the aggregated data were a good, and in some cases an excellent, representation of fisheries on a regional basis. Several comments were made about the extent of certain fisheries implied by the aggregated data; the maps indicating that fishing, albeit at low intensity, takes place on grounds which are known to be unsuitable for particular species or fishing method. It is thought likely that these reflect the size of polygons and variable precision with which fishermen delineated their fishing areas. There was a lot of variation in these parameters, often related to fishing gear. Creel fishermen typically identified more small and more closely defined fishing areas than trawl or dredge fishermen, whose fishing areas were generally mapped as one or two large polygons. On finer spatial scales unrealistic extents may be an artefact, a result of the gridding process which does not take account of the extent of polygon/grid cell overlap.

Maps of the monetary value of fisheries were presented at consultation meetings, for individual fisheries and for all gear/species combined. It was recognised that spatial distribution of landings value for specific fisheries generally reflects activity (number of boats) and that value for mobile gear fisheries e.g. trawl and dredge fishing value tends to be dispersed over large areas compared to that for creel fishing. However, when data for all fisheries are combined, high value species, such as lobster and creel caught Nephrops, have a strong influence on the distribution of value. Perceptions of value, which are high and which are low value areas, can also be affected by the classification of the raster data, the breakpoints and the colours used in the maps.

Concerns most commonly expressed at consultation meetings were those regarding interview coverage, and the effects of missing earnings data and non-interviewed vessels on the value maps. Some queried whether fishermen had reliably estimated gross earnings. We have since compared the value of landings as reported on FIN with fishermen's estimates. There is no evidence of any systematic bias and if anything a slight tendency of fishermen to underestimate gross vessel earnings. The analyses of landings data for interviewed and non-interviewed vessels indicate that coverage was poorest in the Clyde and South West SMR and in some parts of the West Highland SMR, and this was borne out by comments made at some of the consultation meetings. Overall, the data are likely to under-represent the value of fishing by under 15 m vessels, particularly in regions where coverage is poor. The spatial representation of the extent of fishing will also to be less robust in regions where interview coverage is poor.

Notwithstanding the above, data outputs from the ScotMap project have already made an important contribution to marine spatial planning in Scottish waters, particularly in regional evaluations of the potential impacts of renewable energy development and marine protected areas. To date, most emphasis has been placed on absolute monetary value and because of this various ways of raising the interview data to account for non-interviewed vessels and to combine data from ScotMap with that of the VMS monitored fleet have been developed. The relatively coarse (five year) time scale of ScotMap assumes that fishing patterns are reasonably stable both in space and time. Whilst the assumption of stable spatial extent is probably reasonable for static gear fisheries, it is less so for mobile gears e.g. trawling and dredging. In both cases the value of landings and the distribution of value is likely change over time in relation to changes in the markets, stock abundance and alternative fishing opportunities. The period for which ScotMap data will remain relevant will therefore need to be assessed. VMS systems are being fitted to vessels between 12 and 15 m in length but it will be some time before data are available. In response to the need for better data upon which to better manage Scotland's inshore fisheries, various options including repeating ScotMap, data loggers systems ( e.g. Succorfish) and improving spatial resolution of landings information through fishermen's logbooks scheme are being considered. Some of these will be addressed in a series of pilot studies funded under the European Fisheries Fund ( EFF) in 2014-15.

It is important to recognise that ScotMap's main strength is in the provision of synoptic information and that there will be limits to its accuracy, particularly at fine spatial scales. The potential of the data collected to inform marine spatial planning and fisheries management has yet to be fully explored. Future analyses to map fishing effort and alternative ways of representing the relative importance of fishing grounds at the regional level are being considered. The latter is particularly relevant in remote areas where income from fishing has a relatively low absolute monetary value, but where fishing nevertheless plays a crucial role supporting small communities. The data collected as part of ScotMap interviews, could be useful in wider socio-economic analyses, when eg used in conjunction with other information on population and employment.

The ScotMap project is considered to have been successful at various levels. In many areas there was very good uptake by fishermen who welcomed the opportunity to get inshore fishing better recognised in the context of marine spatial planning. The interview approach, although labour intensive, enabled an extremely useful data set on recent fishing activity for the under 15 m fleet to be compiled over a relatively short period of time. The project brought together staff from different parts of Marine Scotland and promoted wide ranging discussion with fisheries stakeholders on the development of marine spatial planning in Scotland, the policy drivers, plans and proposals and the evidence base.

We would thank staff from Marine Scotland Compliance and other data collectors for their heroic efforts, the fishing industry representatives for their advice and support for this project and all the fishermen interviewed who gave freely of their time.