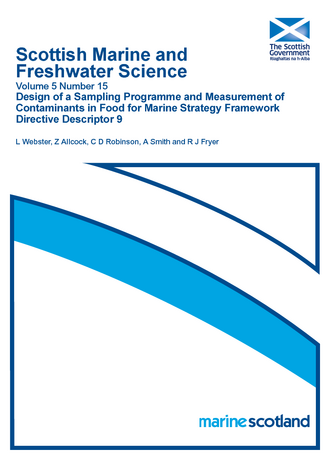 The Marine Strategy Framework Directive ( MSFD) took effect on 17 June 2008 (Directive EC/2008/56 [i] ) and was transposed into UK Law in July 2010 through the Marine Strategy Regulations 2010. The aim of the MSFD is to achieve Good Environmental Status ( GES) for European seas by 2020; the MSFD does not apply to estuaries which are considered as transitional waters under the WFD. The Directive sets out eleven qualitative descriptors against which GES should be assessed. Descriptor 9 states that 'contaminants in fish and other sea food for human consumption do not exceed levels established by Community legislation or other relevant standards '. The Directive required an Initial Assessment of status by July 2012 and the identification of any measures required to achieve GES by 2014. The UK State of the Seas report, Charting Progress 2 1, and Scotland's Marine Atlas 2 were used as the basis for the Initial Assessment, which also includes an economic assessment 3. A public consultation exercise on the UK Initial Assessment and the UK's Targets and Indicators for GES was recently undertaken by Defra; a report on the consultation exercise was produced by Defra and the Devolved Administrations and the Initial Assessment published 3. Monitoring programmes for the assessment of environmental status should be in place by 2014, with the next status assessments due in 2018. However, currently there are a limited amount of Scottish contaminant data collected for monitoring programmes that may be suitable for the assessment of GES against Descriptor 9.

'hazardous substances present in fish as a result of environmental contamination for which regulatory levels have been set for human consumption or for which the presence in fish is relevant'.

Fish and other seafood are interpreted as:

Contaminant levels in finfish farmed in marine waters within WFD limits are not of relevance for assessing GES under MSFD, as their primary exposure is via a fed diet and so does not reflect local environmental conditions.

Levels established by Community legislation are considered to be:

Contaminants found in the marine environment can be from either anthropogenic or natural sources. However, most contaminants are produced by anthropogenic activities. Direct or indirect releases to rivers, from industrial discharges and from sewage works discharges, are major sources of a range of contaminants. Furthermore, run-off from urban areas and atmospheric deposition continue to be diffuse sources of hazardous substances to the marine environment. Fish and other seafood are exposed to contaminants present in the water column and through their diet, which results in the bioaccumulation of contaminants and sometimes adverse biological effects. Substances accumulating in an organism are likely to bio-magnify up the food chain. The transfer of contaminants through marine food chains can result in bioaccumulation in commercial fishery resources and result in transfer to the human consumers of seafood.