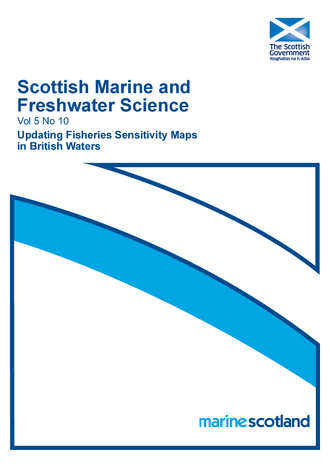 The requirement to display sensitive areas relating to the life history of commercially important fish species in British waters is well recognized and has been used by the Oil and Gas and other offshore industries for over thirty years. An update of these maps will continue to contribute accurate spatial information which will aid sustainable ecosystem-based marine management.

Sensitive areas have previously been described as spawning and nursery grounds. Here we consider only areas where there is evidence of aggregations of 0 group fish and/or larvae of key commercial species. 0 group fish are defined as fish in the first year of their lives.

These fish sensitivity maps were originally generated to provide a spatial and temporal description of where physical damage could potentially occur to fish species at sensitive stages in essential habitats of their life cycle. Sources of damage in this context referred to seismic surveying conducted by the offshore Oil and Gas industry during their site investigations. In addition to the acoustic energy that the seismic survey activities generate, we should now add other percussive impact noises from pile-driving seabed foundation pins into the seabed, such as those required for offshore renewable energy sites. These noises can carry sufficient energy to rupture internal structures in the fragile developmental stages of young fish, particularly those with swim bladders (Oestman et al., 2009). It is also known they can damage the auditory system of fish and cephalopods (McCauley, 2003; André et al., 2011) or may even produce body malformations during larval development in marine invertebrates (de Soto, 2013). These maps can be used to ascertain the requirement for mitigation against these potential damages during industrial activities offshore.

The spatial location of these fish life history events and their potential interaction with offshore industries can heavily influence the planning, costs and delivery of these offshore developments. It is imperative that these maps reflect the current extent of these areas.

Ambitious targets have been set by European nations to reduce carbon emissions by 2020 and beyond, and using low carbon energy sources is one of the approaches to meet them. Activity offshore has thus increased in quantity and diversity with renewable projects and their infrastructure being planned and built in near-shore waters (ABPmer and Marine Scotland, 2013). This increase in offshore developments has been the catalyst for the current update to the fish sensitivity maps upgrade. This report follows on from the Coull et al. (1998) layers and the upgrade of that report as done by CEFAS in 2010 and subsequently in 2012 (Ellis et al., 2010, 2012). The existing fish sensitivity maps have been used regularly in compiling Environmental Impact Assessment reports ( EIA) for offshore developments and allow offshore operators to take into account these areas of environmental concern.

The specific locations of these sites of fish sensitivity are not static and may shrink, expand or move from one site to another over time. Anthropogenic activity may, with time, impinge upon previously un-impacted areas of sensitivity, for example areas of 0 group fish aggregations.

Mean sea water temperature increase associated with climate change and its effect on the distribution of these sensitive sites will also have to be considered as a potential reason for the regular requirements for updates of these maps; scientific trawl data dating back from early 20 th century reveals trends in species composition in UK waters that may lead to changes in the range of the species harvested commercially, see Beare et al. (2004, 2005) and Genner et al. (2004).

Data on the distribution of fish species in British waters are collected yearly through the regular stock monitoring surveys as conducted by European marine research institutes in their role as fisheries data suppliers to the International Council for the Exploration of the Sea ( ICES). Data used for this update have again been taken from various of these available sources including the National and International Bottom Trawl Surveys ( BTS, IBTS), Beam Trawl Surveys ( BTS) and International Herring Larval Surveys ( IHLS). In addition to these, commercial fishing observer trips and stand-alone surveys to investigate particular issues have provided further data on the distribution of 0 group fish of relevant species.

As well as new and additional data, different data analysis techniques have been used to generate alternative outputs from the existing survey datasets. The principal analysis technique used was Species Distribution Modelling ( SDM), also known as Habitat Suitability Models or Ecological Niche Models. These models combine observations of species occurrence or abundance with environmental data. This allows us to predict the distribution of species in geographic space on the basis of a mathematical representation of their known distribution in environmental space - the ecological niche (Elith and Leathwick, 2009). This technique has been used extensively on land, as data are more plentiful and continuous, but progressively more work is being done on marine species: see Maxwell et al. (2009), Moore et al. (2010) and Reiss et al. (2011) as examples.

For this report this technique has been applied using data indicating aggregations of 0 group fish, or for some species, presence or absence of 0 group fish, used together with the most up-to-date and relevant environmental layers, to offer an evidence-based modelled estimate of the probability of presence over the entire study area. The outputs from this process can be used as a guide to the most likely locations for aggregations of fish during their first year.

It must be borne in mind that the quality and reliability of the model outputs will be dependent on the quality and resolution of the data used, the type of ecological niche of each species and the assumptions and biological threshold cut-off points made by the operator. However, with the correct controls, this is a very powerful technique. As such, prior to using these final outputs in a practical context it would be appropriate to complement the outputs by corroboration of physical presence through surveys in the predicted areas.

These processes will benefit from complementary stakeholder input; the fishing industry, in particular, will be able to add value to the final outputs by communicating their view of where and when, in their experience, the sensitive sites occur. It is envisaged that the fishing industry's views will be communicated through a small number of consultations after distributing the outputs to fishing representatives.