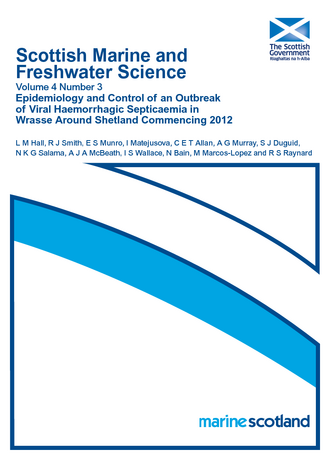 An outbreak of Viral Haemorrhagic Septicaemia ( VHS), as defined by European Community Council Directive 2006/88/ EC, was detected during December 2012 in multiple species of wrasse (Labridae) stocked onto six sea-water sites around Shetland Mainland. The wrasse were originally captured from the wild off the west coast of the Scottish mainland and were being used as a biological control of sea-lice (Caligidae) on Atlantic salmon ( Salmo salar) farms.

Inspection, diagnostic testing, contact tracing, epidemiological enquires and other relevant research were undertaken as part of an outbreak investigation, containment areas were established, and the removal of stocked wrasse was initiated. To date three of the six affected sites have been cleared with a substantial proportion (≈99%) of wrasse removed from the remaining sites.

A qualitative risk analysis suggests that the chance of this outbreak originating from the marine environment around Shetland is moderate and alternative possibilities are either low or negligible.