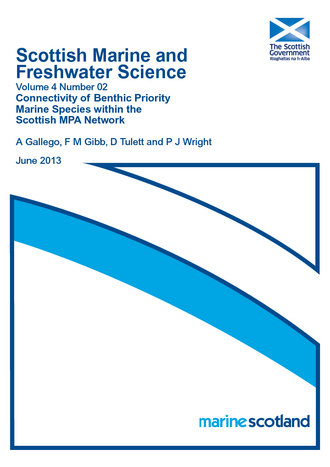 As demonstrated by the GAM fitted to mean transport distance for each species and as it would be intuitively expected, the dispersal potential of offspring of any given species was significantly related to the duration of its pelagic larval phase ( PLD). Additionally, mean transport varied regionally in relation to distance from the coast and season, although only winter spawning resulted in significantly longer transport patterns, reflecting the influence of generally stronger winds on water circulation. Distance to shore captured most of the geographically-induced variability so OSPAR region did not show a significant effect, although qualitatively it appears as if west coast (part of Region III: Celtic Seas) MPAs are more dispersive than northern North Sea (part of Region II: Greater North Sea) ones. Note that mean straight distance between start and end positions at the end of the PLD is only an approximation of actual transport, for computational expediency. The actual particle trajectories will always be longer due to tidal and random (diffusion) effects, in addition to the circulation around land masses (particularly relevant in the case of larvae of west coast origin transported into the North Sea).

The model presented here indicates that the larvae of species with a PLD ≥ 30 days that were not solely associated with sea lochs or near-shore regions could be advected from the Celtic Sea to the Greater North Sea OSPAR sub-region, depending on the proximity of the origin MPA to the sub-region boundary in the case of species on shorter PLD. These species include tall sea pen, horse mussel, native oyster, ocean quahog, burrowing sea anemone, spiny lobster and a few other species that had not been identified in Greater North Sea MPAs, such as fan mussel, flame shell and heart cockle. The export potential of these species mean that, if a sufficiently large enough component of the parental population is protected, then these areas may be able to seed unprotected sites of suitable habitat throughout these two sub-regions.

Species at Risk of Local Pressures due to Low Connectivity

The species at greater risk due to low connectivity are generally those with short PLD and/or present only in a small number of MPAs. Species like burrowing amphipod, northern feather star, pink soft coral and northern sea fan are potentially more vulnerable due to their short PLD, while heart cockle or horse mussel have only been identified in a small number of MPAs. Note that a small number of inshore MPAs were not resolved in our analysis but the species those areas seek to protect would be, due to their location, potentially more vulnerable due to their likely less dispersive environment. Further hydrodynamic model developments (see below) should allow us to quantify this and assess or revise the degree of vulnerability of these species.

As described in the Methods section, the flow fields used in the current modelling exercise were obtained by averaging a 16-year series of year-specific runs of a statistical model ( SNAC; Logemann et al., 2004) of a hydrodynamic model HAMSOM; see Backhaus, 1985), over a geographical domain between 50-65° N latitude and 15° W - 15° E longitude. This approach has a number of limitations that need to be addressed by further research:

Even though spawning time was one of the parameters considered in our simulations, we assumed single one-day spawning events for any given season. First of all, this is biologically unrealistic as species do no spawn synchronously over the whole area of interest, nor are they likely to undertake single spawning events in the middle point of any given season. Sensitivity analysis comparing single egg release events against more realistic Gaussian spawning curves carried out by Gallego (2011) on a similar model system showed an effect that, in our model, would most likely result in offspring dispersion over wider areas, thus resulting in relatively higher connectivity and broader export of larvae. However, given the scarcity of biological information available for most PMF species (in some cases, not even information about spawning season was available), it was not feasible to use more biologically realistic assumptions and we can only note that our simulations can only be a simplified representation of the actual level of biological complexity and that this may have an effect on our results, especially in the case of species where important seasonal differences have been observed in our results (e.g. northern sea fan).

Pelagic larval duration ( PLD) was identified in the results of the analysis of individual species and also by our GAM analysis as an important factor for dispersal distance and degree of connectivity. This conclusion is self-evident as larvae that spend a longer time in the pelagic phase will be transported by currents for longer distances and, therefore, have the potential to drift over a greater number of MPAs. However, there is little accurate information about PLD and settlement windows for many of the PMF species considered here, and in any case we were forced to group PLD and settlement window parameters into a limited number of groups, to keep the post-processing of the original particle tracking simulation data manageable. However, it is important to be aware of the fact that the parameterisation used here was, again, an oversimplification of what happens in nature, although the general patterns derived from our simulations are likely to capture the general transport and connectivity patterns that would take place in reality.

In the absence of detailed biological information, the "behaviour" of particles representing larval PMF species was not accounted for. Particles were kept at a constant depth for the whole duration of their PLD. This is clearly unrealistic, as planktonic larvae are known to display at the very least vertical migration patterns in the water column. The importance of particle behaviour was explored by Gallego (2011) and found to be potentially important. However, once again, there is very little information about larval behaviour for the majority of PMF species, and the environmental data that may act as behavioural cues in nature is absent from the model, so larval behaviour could not be modelled dynamically.

The estimates of connectivity assume that there is suitable habitat for advected larvae to settle in all possible MPAs that are considered. This will of course exaggerate the level of connectivity as, although most possible MPAs contain a range of habitats, they do not include all suitable types. However, too little is currently known about the habitat requirements of most of the PMF species to be able to map the precise areas of suitable habitat.

Overall, we are confident that the current modelling exercise is adequate to provide a general description of the degree of connectivity between proposed MPAs for individual PMF species. Also, it should be noted that no influx from non-protected into protected areas was assumed, while in reality it cannot be expected that PMF species are only present in MPAs. However, this effect may be partially offset by the also unrealistic assumption that PMF species are uniformly present over the whole area of MPAs where they have been identified, an assumption which is likely to result in some degree of overestimation of connectivity and dispersal. Without a comprehensive map of species distribution within and outside MPAs, it is not possible to overcome these potential shortcomings. More detailed biological information would allow us to develop more biologically realistic simulation models but it is not yet clear that a considerably more complex modelling exercise, even if feasible, would result in more realistic results, given the likely uncertainty and variability that would be associated with most biological parameters. However, there are aspects where our analysis could be improved quite feasibly, for example by making use of a more finely resolved hydrodynamic model of Scottish waters when such a model becomes available. In any case, we are confident that the present outcomes are unlikely to change significantly as a result of further developments and, as it stands, the present approach is already considerably more sophisticated than what has been used to define MPA networks in other areas.

The estimation of connectivity suggests that in general there is sufficient replication of PMF species among possible MPAs within and among biogeographic ( OSPAR) areas. Tall sea pen, burrowing anemone, spiny lobster and most bivalve molluscs have a sufficiently long PLD to ensure extensive dispersal among MPAs. Even many species with PLD ≤ 10 d that are well represented in the MPA network and inhabit areas away from the coast should have some connectivity within OSPAR regions. This means that any build-up of reproductive capacity of PMF species within protected areas could be expected to have a wider ecological benefit in providing a source of larvae for surrounding regions and adjacent MPAs. However, connectivity is clearly an issue for species that are not well represented in the network such as heart cockle and horse mussel, while burrowing amphipod, northern feather star, pink soft coral and northern sea fan may be more vulnerable to local pressures because of their low potential for dispersal.