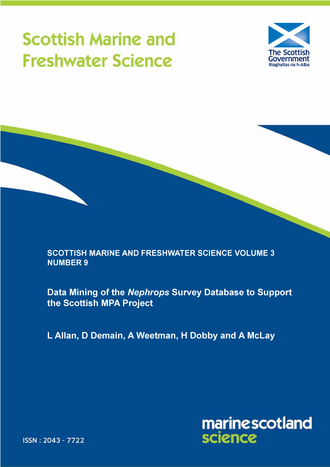 Marine Scotland Science conducts annual underwater television surveys to estimate the abundance of Nephrops norvegicus on muddy sediments in seas around Scotland. Underwater footage is recorded to DVD and reviewed by two independent observers. Nephrops burrows are counted and burrow densities over each survey tow are estimated from the average counts and viewed area. Additional data are also collected during the surveys, including sediment samples and observations on sea pen abundance, presence of fish and other benthic species and evidence of anthropogenic activities (trawl marks). All survey data are held in a purpose designed database, the ' Nephrops survey database'.

In 2010, following discussions with Scottish Natural Heritage and the Joint Nature Conservation Committee, it was agreed that data within the Nephrops survey database would be used to assist with the Scottish Marine Protected Area project, specifically the mapping of burrowed mud and offshore deep mud habitats (biotopes). This report documents work carried out, including summaries for each area surveyed and maps based on Geographic Information System layers.