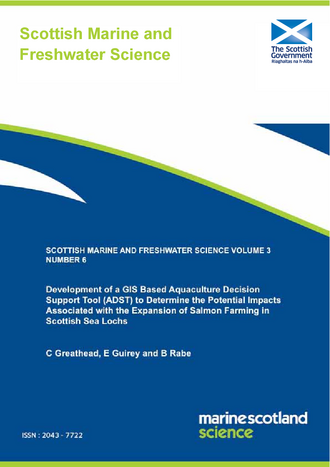 In light of increasing demands for seafood around the world and reduced productivity in the fisheries sector, there will be an increasing requirement for aquaculture to address the short fall. Also, one objective of the draft National Marine Plan ( MSS, 2012a) is to increase finfish production in Scotland by 50% on 2010 levels by 2020.

Understanding what the limiting factors are with regard to the environmental impacts of an expanding aquaculture industry will ensure that the industry is not unnecessarily restricted and that environmental impacts are managed effectively. Environmental guidelines currently place limits on allowable nutrient enrichment and benthic impact from fish farming and new European directives will set targets for the environmental status of the marine environment (Marine Strategy Framework Directive, MSFD 2012). Other limitations include the availability of raw feed materials, the capacity for used medicines and other chemicals to be assimilated and degraded in the environment and the challenges associated with an expansion into more open waters. This paper presents a GIS based aquaculture decision support tool ( ADST) to assist with planning the sustainable development of the aquaculture industry in Scotland. This tool has been developed alongside and incorporates elements of a project to develop ecological sustainability indicators for Scottish aquaculture (Greathead et al., 2012, in press). It provides advice to better understand the distribution of and the potential limitations due to the deposition of organic matter onto the seabed from fin fish aquaculture.

As part of the indicators project, new thresholds for the degree of nutrient (µmol N l -1) and benthic enrichment (% loch area degraded) were proposed. These thresholds corresponded to a theoretical maximum biomass of fish that could potentially be farmed in a specific sea loch (B TMAX(i); t yr -1).

The area required to produce the B TMAX (A REQ) was calculated using a standard value for the amount of fish that could potentially produced per km 2 (P d). The results showed that in the majority of the sea lochs (81%), due to the limited area with depths suitable for aquaculture (15-70 m), it would be extremely improbable that they could reach their maximum potential biomass, with regard to nutrient and benthic enrichment; although some increase in production would be possible.

When calculating the benthic impact of a fish farm the position of the fish farm in the sea loch is one of the key parameters. Present models predict the environmental impact from existing sites; whereas the ADST described in this paper allows the environmental impacts from any future potential sites to be predicted. This will help plan sustainable future aquaculture development within sea lochs.

The ADST visualised the number and position of potential new aquaculture sites within each sea loch and the maximum biomass suitable for each site based on benthic impact. At the heart of this tool was a modified version of the Marine Scotland Science benthic impact ( MSS - BI) model. This calculated the maximum biomass that could be placed on each of these potential new sites before the peak organic deposition limit (7 kg m 2 yr -1) was breached below the cages (B CMAX).

To develop the ADST, a base layer of bathymetric data (15-70 m) was taken for the whole of Scotland and specific areas considered inappropriate for salmon aquaculture development were masked out. The resulting area remaining (31 977 km 2) was used to determine the total potential aquaculture production this area could support by combining it with a standard potential production value per km 2, calculated from annual production data resulting in a total of 158 x 10 6 t yr -1. This does not include any environmental, social or economic restrictions that might apply.

This base layer was then clipped to just include the sea lochs that were currently in the Scottish Government' s Locational Guidelines for fish farms (Gillibrand et al., 2002). This resulted in a total area within sea lochs potentially available for salmon aquaculture development of 2 736 km 2. The number of new farms that could be placed in a sea loch would be restricted by the physical space available; this number and the potential biomass held at each site could be further restricted by the benthic impacts and nutrient enrichment of these potential new sites, local planning guidelines and economic and logistical limitations.

Tools were developed to determine the number of new farms that were possible to be placed within the Potential Aquaculture Development Area ( PADA) of each sea loch, given certain criteria. The modified MSS - BI model was then applied to each of these potential new sites.

The application of the MSS- BI.m model to these theoretical fish farm site positions has produced a definitive figure for the maximum potential biomass that can be produced in a sea loch (sum of B CMAX values), bearing in mind both organic deposition and spatial factors. When these results were compared to the B TMAX results it was clear that benthic impacts were the key limiting factor for the further development of aquaculture in sea lochs, excluding any planning restrictions.

The analysis and results from the ADST as well as the ecological indicators project show that although the maximum potential theoretical fish biomasses within the majority of sea lochs is high, the benthic impact below individual fish farm sites could limit the biomass held at each site and in the sea loch as a whole. Also, the areas in sea lochs within the 15-70 m depth range and available to aquaculture development is finite, which means that the positioning of sites to obtain maximum biomass potential for the least environmental impact should be considered carefully. Therefore, the ADST will be a key tool to identify which sites would be most suitable for development ( i.e. least environmental impact for maximum production).

Although there could still be limitations such as the requirements of other sea users and technical advancements, there is also potential for the expansion of aquaculture into the offshore areas of Scotland.