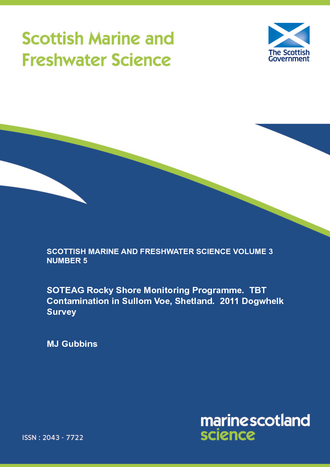 Dogwhelks were collected from 20 sites throughout Sullom Voe and Yell Sound in August 2011 by Aquatic Survey and Monitoring Limited, and transported to Marine Scotland Science, Marine Laboratory in Aberdeen for imposex analysis. Dogwhelks of all sizes (8 mm juveniles to adults) were collected from five of the sites. Results of the present survey were compared to the eleven previous surveys and assessed against the Oslo and Paris Commission ( OSPAR) assessment criteria.

The degree of imposex measured as Relative Penis Size Index ( RPSI) and Vas Deferens Sequence Index ( VDSI) in toothed adults from sites within Sullom Voe in 2011 show that these sites continue to be more impacted by TBT than populations at sites in Yell Sound. Since TBT inputs to the voe have ceased following the International Maritime Organisation ( IMO) ban on use on large vessels in 2008, this is likely be due to reservoirs of residual concentrations in sub-tidal sediments in the area of the terminal. Throughout Sullom Voe, RPSI and VDSI values in adults ( RPSI 0.02-0.31%; VDSI 1.25-2.73) were generally lower than the values in the 2009 survey. The RPSI values of populations outside the Voe ( RPSI 0.00-0.07%), in the well flushed waters of Yell Sound, were generally lower than at sites within the voe and showed either no change (increases of <0.01%) or a decrease from 2009 values. VDSI at sites in Yell Sound were much lower (0.06-0.67) than at all sites inside the voe and just outside (the boundary sites: 0.62-1.6). As in previous surveys, the degree of imposex in populations in Yell Sound tends to decrease with distance from Sullom Voe.

In 2009, for the first time since the survey began, there was no evidence of sterility in any of the populations. This trend continues in 2011 as the VDSI measurements at the sites within the voe showed that these populations can continue to reproduce. RPSI and VDSI levels at all sites showed either no significant change or a decrease in levels (except at site 6, Grunn Taing where a small increase in VDSI was observed). RPSI levels at all sites were close to zero. The substantial decrease in VDSI observed at all sites within the voe and at boundary sites between the Voe and Yell Sound in 2009 continued in 2011. These decreases in VDSI resulted in no change in OSPAR Classification for the sites inside Sullom Voe, however the continued decrease of VDSI at sites outside of the voe resulted in improvements in OSPAR classification at sites 1, 5, 13, 14, 15, 16, 17 and 19. At site 14 (Grunna Taing) the unexpected increase in VDSI observed in 2009 had returned to levels more in line with the expected continual decline of imposex across the region.

Generally, the survey indicates continued improvement in imposex incidence across the area, likely resulting from the cessation of inputs from shipping to the area as a result of the IMO TBT ban on large vessels in 2008 and a reduction in environmental concentrations through degradation.

This report provides the results and assessment of a survey carried out by Marine Scotland Science, Marine Laboratory, Aberdeen as part of a rocky shore monitoring programme undertaken by Aquatic Survey and Monitoring Limited, commissioned by the Shetland Oil Terminal Environmental Advisory Group ( SOTEAG), and funded by the Sullom Voe Association.