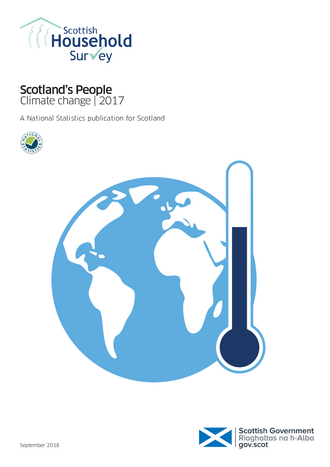 Action to tackle climate change is a high priority for the Scottish Government, which recognises that without public understanding, engagement and action, it will not be able to meet its climate change targets.

The Scottish Household Survey results show that the majority of adults in Scotland believe that climate change is an immediate and urgent problem, and that the proportion with this view has been increasing for the past three years.

Most adults also believe that they understand what actions they should take to help tackle climate change. However, the SHS data does not show whether the respondents actually do know what they could do, or whether they are taking any action in practice.

As part of the Scottish Government’s commitment to tackling climate change, a new Bill has been introduced in Parliament which will write Scotland’s obligations under the Paris Agreement into domestic law and make Scotland’s existing climate legislation and targets even tougher.

This transition to a low carbon Scotland will involve changes in how people get around; how homes and other buildings are insulated and heated; and how people purchase products and services to support the circular economy.

Individuals, families and communities, as well as public bodies, businesses and the third sector, will be essential partners in this effort. The Scottish Government will continue to encourage public discussion about climate change, and to support people to take low carbon actions in their everyday lives.

The Scottish Government’s Greener Scotland website advises people on how they can help Scotland tackle climate change by changing their everyday behaviours.