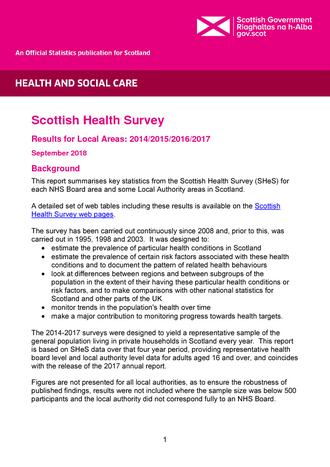 Summary of results for NHS Boards

The Warwick-Edinburgh Mental Wellbeing Scale ( WEMWBS) is used to measure mental wellbeing. The mean score for adults in Scotland in 2014-2017 was 49.9 - those living in Ayrshire & Arran, Tayside (both 49.1), and Greater Glasgow & Clyde (49.3) had significantly lower mean scores than the Scotland estimate. Mean scores were significantly higher than the Scottish average for residents of Grampian (50.9), Western Isles, and Highland (51.0).

In Scotland, 65% of individuals were overweight or obese, with the figure for men (68%) significantly higher than that for women (62%). Results for a number of boards were significantly different to the Scotland figure. These included lower results for Lothian (58%), and higher results for Ayrshire & Arran (70%), Lanarkshire (71%), Western Isles, and Orkney (both 73%).

In 2014-2017, the lowest proportion of adults meeting the physical activity guidelines was observed in Borders and Ayrshire & Arran (both 60%), while the highest proportion was in Lothian (68%). However, due to sample sizes, only the Ayrshire & Arran and Lothian proportions were significantly different to that of Scotland (64%). Men in Scotland were significantly more likely to meet the guideline (68%) than women (59%).

Summary of results for Local Authorities
Methods and indicators