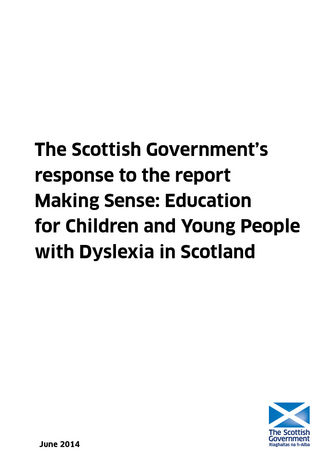 I would like to thank Education Scotland, and the many people who contributed to the review, for the work that has led to the production of Making Sense: Education for Children and Young People with Dyslexia in Scotland. I welcome this important report and I believe it can help to make a positive difference to the educational experiences of Scotland's children and young people with dyslexia.

Every pupil in Scotland should experience the broad general education they are entitled to under Curriculum for Excellence. However, many of our children and young people face barriers to learning that could prevent them from realising their true potential without appropriate support.

Dyslexia can bring strengths in terms of creativity and abstract thinking, ably demonstrated by the pupils of Kyle Academy at the launch of the report. However, it can also bring real challenges. The ability to read and to communicate ideas in writing is critical if a pupil is to access the full range of educational opportunities found in our schools. Without appropriate support, a pupil with dyslexia may fall behind their peers, lose confidence in their own abilities, and potentially disengage from learning altogether.

This report shows that while we have made much progress in provision for pupils with dyslexia, more needs to be done. Early identification of dyslexia needs to be a priority for all our schools.

The statistics in the report also indicate that pupils with dyslexia are not yet achieving parity with their peers in terms of academic attainment or in accessing higher education. Being diagnosed with dyslexia does not diminish a pupil's potential and I will not accept any limits being placed on their ambitions. This is why I asked Education Scotland to carry out an independent review into why this is happening and to identify and share the good practice that I know exists across Scotland.

I want to put an end to the days of pupils with dyslexia disengaging from learning through lack of support. There is no reason why every pupil in Scotland with dyslexia should not be identified early and receive the help and support they need to grow and prosper. That is their entitlement and this Government will do everything in its power to make that a consistent reality across Scotland. I believe the report and this response can help us do that.