Foreword by the Cabinet Secretary for Finance, Economy and Fair Work 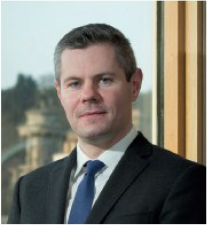 This report demonstrates the continuing progress made over the past year in operationalising the Fiscal Framework and implementing the wide range of powers devolved under the Scotland Acts 2012 and 2016. Once all Scotland Act 2016 tax powers are implemented, it is expected that around half of the Scottish Government's budget will come from devolved or assigned revenues.

We have used these powers to make significant changes, particularly with regard to Scottish income tax with the introduction of two new bands and a change to some rates. I have committed to maintaining the new structure of income tax for the remainder of the Parliament. As such, the 2019-20 Scottish Budget made no changes to rates, and did not introduce or remove any bands. This ensures that 55% of Scottish taxpayers continue to pay less than they would if they lived elsewhere in the UK, and Scotland continues to be the fairest taxed part of the UK.

I welcome the Scottish Parliament's continuing scrutiny of and interest in the range of work to implement these powers.