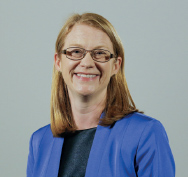 The Scottish Government has embarked upon a series of public consultations in order to build a new rights-based Scottish social security system that is grounded in the principles of dignity, fairness and respect. An important aspect of that is people's right to appeal if they think Social Security Scotland has not made the right decision in relation to their entitlement. In order to realise that right a new chamber of the First-tier Tribunal is being created that will hear appeals in relation to devolved social security benefits. The Scottish Government has been working with the Scottish Courts and Tribunal Services to ensure what we create in Scotland meets the needs of people using the system.

The overarching aim is to create a chamber which is efficient and effective in dealing with appeals whilst ensuring the dignity and respect of individuals at the heart of the social security system. The new chamber will be in place in time for the start of the delivery of Best Start Grant, the first benefit which carries a right of appeal to be delivered by Social Security Scotland.

In order to set up a new chamber of the First-tier Tribunal for Scotland, and ensure necessary provision is made for the Upper Tribunal for Scotland to deal with social security appeals, six sets of Regulations need to be in force. The Regulations are being made under the Tribunals (Scotland) Act 2014. We consulted on the draft Regulations between January and July 2018. This included a full public consultation and consultation with senior members of the judiciary that the Tribunals (Scotland) Act 2014 requires. In addition, the Social Security Committee of the Scottish Parliament undertook an evidence gathering session with key stakeholders.

I am grateful to all who responded to the consultation and for the broad support for the draft Regulations. The responses reflect the views of those with lived experience of the existing UK social security system and appeals process and their input has been invaluable in shaping the final Regulations.

This report from the Scottish Government covers the views of all those who provided feedback during the consultation process and explains where the draft Regulations have been revised. In doing so it was necessary to balance the views of respondents, the judiciary and the Social Security Committee's evidence gathering session, while ensuring that what is proposed does not lead to operational or other difficulties.

This process has been supported through the Judicial Reference Group, which was established under the direction of the President of the Scottish Tribunals to support the establishment of the new chamber. I would like to thank members of the Group for their advice, guidance and support to the Scottish Government throughout the process.

The final Regulations as amended are being laid in Parliament today.